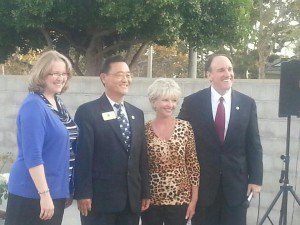 While the business tax amounted to only $51 per business, these changes are exactly what every city and town in the State of California should be doing – whittling away at business-killing regulations, policy, taxes and fees.

In an interview with Irvine City Council member Christina Shea, she explained the City of Irvine now has large reserves and a growing economy, thanks to the fiscal conservatives on the city council, whose goal is giving back the community their own money, while remaking the city to be business-friendly. Shea describes Irvine as an island unto itself, in the business unfriendly state of California.

Irvine Then and Now: Corruption vs. Prosperity

Former Democrat Mayor Larry Agran was an Irvine councilman or mayor for all but eight years since 1978. Agran and his council clan spent more than $200 million earmarked for the development of the Orange County Great Park — but not on the park. “The ugly reality includes Agran’s penchant for secrecy, cronyism, narcissism and mismanagement, especially at the Great Park, a noble idea the career politician slyly converted into a biennial election tool to keep his council alliance in power, a circumstance that allowed him to give $167,000 per month in no-bid, public-relations contracts to his own political operatives,” the Voice of OC reported.

The Irvine Great Park land, formerly the El Toro military base, was given to the city of Irvine by the U.S. Navy following base decommission, along with $200 million provided by The Lennar Corp. Lennar made a winning bid of $649.5 million for El Toro. Immediately after escrow closed on July 12, 2005, Lennar agreed to transfer 1,347 acres to Irvine for a park and to pay $200 million in development fees for park construction. 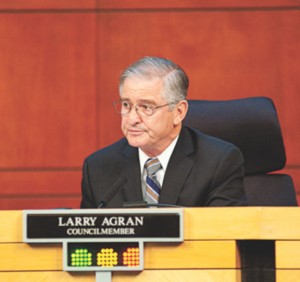 However, over the course of seven years, Agran authorized spending the park money on numerous large unrelated contracts, which had little to do with development of the Great Park.  Lennar also pledged to spend another $201 million for joint infrastructure and facilities such as roads and utility connections. The $201 million would come from a Community Facilities District bond sale secured by the property. Homeowners in a CFD (also known as a Mello-Roos district) pay a special tax, in addition to their customary county property tax, for infrastructure and other improvements, according to a Grand Jury report.

Show Me The Money

With estimates of the Great Park’s total cost as high as $1.6 billion, Agran authorized payments of $125,000 per month to his political consultants Arnold Ford, and another $15,000 per month to consultant Chris Townsend, according to Council Member Jeff Lalloway.

Lalloways said in an interview that by the time Lalloway and Shea were elected and there was a new majority on the council, they authorized an investigation and audit of the Great Park funds, necessary to get to the bottom of what happened to more than $200 million in funds spent on the park. “There were 23 depositions, under oath,” Lalloway said. “We needed to know what the expenditures were, and how more than $200 million was spent.”

The audit found more than $200 million was spent, with only about $20-30 million actually going to the park. The rest was wasted.

A performance review of the various contracts was done in the audit. Once Lalloway, Schott, Shea and Mayor Steve Choi were elected, they cancelled all park contracts.

The results of the 2014 forensic audit showed the political consultants were used to help keep Agran and his cronies in office, rather than for the development of the park. http://www.ocgrandjury.org/pdfs/greatpark/The-Great-Park-Report.pdf

Ironically, In a 2014 letter to Attorney General Kamala Harris, then-Councilmember Agran called the Great Park audit “a template for corruption,” and asked the AG to investigate possible criminal misuse of public funds by Mayor Steven Choi, and Irvine Councilmembers Jeff Lalloway and Christina Shea, because the audit cost $1.3 million dollars.

But there are numerous stories showing Agran dragged out the audit and investigation. In “Larry Agran Gives Middle Finger To Deposition Subpoena On Great Park Shenanigans,” author R. Scott Moxley wrote, “But it is fascinating that Agran, who has a California law license and was a 1992 presidential candidate, thinks he can ignore a lawfully issued subpoena that compelled his presence Wednesday for a deposition in the city’s ongoing investigation into Great Park shenanigans.”

There have been no prosecutions to date of the former Mayor Agran or council members involved.

“The park audit revealed that Gafcon had an undisclosed, ‘conflict of interest,’ side deal with Agran’s most favored Newport Beach political operatives at Forde & Mollrich, the ones that grabbed an outrageous $100,000 a month, no-bid, no-benchmark deal to perform public relations for a government park that wasn’t close to completion,” OC Weekly reported.

Following the audit, Gafcon enlisted the help of their San Diego Assemblywoman Lorena Gonzalez, a Democrat, to swing into action. Gonzalez tried to get the Joint Legislative Audit Committee to audit the audit – to discredit the audit. Gonzalez claimed the audit was politically motivated, ignoring the multiple layers of overview and review of the audit by the Orange County District Attorney, the Grand Jury, the former presiding judge of the Orange County Superior Court, and other public officials.

The audit found, “The City has potential legal claims against Gafcon, Forde & Mollrich and potentially others for these matters that created potential conflicts of interest and matters creating the appearance of impropriety. The decision of whether or not to pursue these claims rests in the sound discretion of the City Council and is the proper subject of a closed session discussion.”

All of San Diego’s legislative lawmakers supported Gonzalez, but the request never made it to the Senate, and it died. Had Gonzalez succeeded, it was apparent the second audit was clearly going to be used against the Republicans on the Irvine City Council – and to make political headlines for the politicians involved.

In Bed With Redevelopment

Irvine’s five former City Council members were also the self-appointed five members of the Redevelopment Agency Board of Directors as well as the majority on the nine-member board of the Great Park Corporation. “This arrangement creates an enormous potential for conflict of interest because each of the three entities has its own goals, which do not always coincide with the other two,” the Grand Jury wrote. “No California city of Irvine’s size has a $1.6 billion park project and a redevelopment agency that owes its city $134 million for a loan.”

Some Good News For Irvine Taxpayers

Councilwoman Shea reported they have negotiated $295 million to come back to the City as unrestricted general fund money from the State, “making the Great Park reserves very health once again.”

“Our general fund reserves by December will reach our majority goal of 20 percent of our annual budget, over 35 million,” Shea explained to me in an interview. We have a Construction-In-Progress account, and Asset Management Plan of over 60 million.”

She and Lalloway stressed that under the Republicans’ leadership, they are working on paying down their 95 million pension liability, and expect it to be paid off in six years. Shea and Lalloway said the issues they are dealing with may not be sexy, but they are focused on the proper roles of local elected officials: a balanced budget, which for years used reserves; getting the Great Park built without increasing taxes; and reducing fees and taxes.

Here is the Orange County Grand Jury Report, Financing the Great Park: Now You See It, Now You Don’t

The Orange County Grand Jury is expected to release another report next week, on which I will report.