Last week, Pope Francis called for a cultural revolution to correct what he calls the “structurally perverse” economic system of the rich exploiting the poor that is turning Earth into an “immense pile of filth.” Under the sub-heading “Climate as a common good,” he disparaged free market principles while indicating “global governance” as a solution to the politically created climate change crisis. The Pope also said that governments should redistribute wealth to the poor, advocating socialism, and he even gave communism a backhanded compliment.

Bishop Marcelo Sorondo, chancellor of the Vatican’s Pontifical Academy of Sciences, said it is the pope’s wish to directly influence next year’s crucial UN climate meeting in Paris, when countries will try to conclude 20 years of fraught negotiations with a universal commitment to reduce emissions. 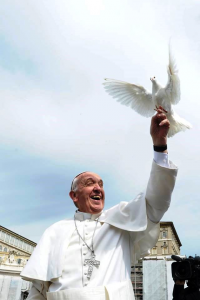 Whenever I hear pontifications about the “common good,” I’m reminded of a quote by C.S.Lewis: “Of all tyrannies, a tyranny sincerely exercised for the good of its victims may be the most oppressive.”

In his manifesto aimed at assisting “U.N. climate negotiations, domestic politics and everyday life,” Francis said the science of global warming, which he blames on an “unfair, fossil fuel-based industrial model,” harms the poor most.

How could the Pope have strayed so far from his purpose, while simultaneously spewing such a destructive message – which also harms the poor most?

Citing Scripture and past popes’ and bishops’ appeals, he urged all people of faith and of no faith, to embrace a lifestyle of wealth redistribution, and doing without.

The Pope’s message is an indictment of big business and climate change skeptics. Like former Pope Benedict, Francis has condemned fossil fuels and is now pushing for more “just” economic reforms.

For some context, I spoke with a colleague, who is also Orthodox Catholic, about the Pope’s Encyclical.

“Pope Francis is a left-wing South American Jesuit, and holds commensurate left-wing economic and political views.  His encyclical is misinformed in so many ways, but the real story is the broader issue of what causes Francis has decided to push and what not to push,” my colleague explained. “Pope Francis has decided to make borderless immigration one of his signature causes.  He has made splashes with his critiques of capitalist economies.  Now he puts out a green encyclical that is sure to become a hatchet for leftist environmentalists.  Yet, as he is cheered by the worldwide political left, he remains silent on key issues of modern moral implosion.” Evidence of this is the Pope’s earlier views on sex and gender and climate change is how he was vehement while Cardinal, but has flopped hypocritically since becoming Pope. How can an infallible Pope change his mind? He was either wrong then, or is wrong now.

My colleague pointed out when he was archbishop of Buenos Aires, Pope Francis said that Argentinian legislation that sought to legalize same-sex marriage was the work of the “father of lies [i.e., Satan] who seeks to confuse and deceive the children of God.” (see ncregister.com)

Last year, the Pope gave a talk on this topic at a Pontifical Academy of Sciences meeting. In attendance were Joseph Stiglitz, President Clinton’s former economic advisor and a member of Socialist International, and Jeffery Sachs who you can see giving a speech at the party of European socialists (itself part of Socialist International). And rather notable is Sachs’ Earth Institute also lists George Soros as an advisor.

Sachs and Stiglitz participated in writing a Vatican declaration by the Pontifical Academy of Sciences, along with others who attended that meeting on global warming, the Daily Caller reported. The document from participants of the meeting pushes for ditching market economies to fight global warming and environmental degradation.

“Market forces alone, bereft of ethical values, cannot solve the intertwined crises of poverty, exclusion, and the environment,” the document adds. “The move to a sustainable world will not be cost-free for all: the options we face are not ‘win-win.’”

Pope Francis, who is on record as believing that same-sex marriage is the work of Satan, was apparently willing to let Satan do his work in Ireland unhindered.  Instead, he gives the faithful and the world his views on climate change and the evils of air conditioning.  “I’m sure the Devil is quaking in his boots,” my colleague said.

One of Francis’ core points is that there really is no distinction between human beings, their faith and the environment. “Everything is related, and we human beings are united as brothers and sisters on a wonderful pilgrimage, woven together by the love God has for each of his creatures and which also unites us in fond affection with brother sun, sister moon, brother river and mother earth,” he wrote in the Encyclical.

“The cruelest fact of all is that Europe’s “climate change” policies are “Worse than useless,” as an Economist headline describes them,” Craig Richardson Executive Director of the Energy & Environment Legal Institute wrote. “Economist Bjorn Lomborg wrote in a Telegraph article, ‘For twenty years, the refrain has been promises to cut CO₂, like the Kyoto Protocol. For twenty years these policies have failed.’ It’s time to balance the cost of climate alarmism against the fact that the proposed policies have been recognized as likely to have no demonstrable effect on the actual climate.”

E&E Legal has produced and released an important two-minute video that discusses the Pope’s encyclical and “Energy Poverty” in Europe, showing how many millions of elderly and poor Europeans have died as a result of these same climate change policies.

Richardson, who also holds a Master’s Degree in Catholic Moral Theology, added: “Pope Francis had a tremendous opportunity to address one of the most serious moral issues of our time. Instead, he has given credence and momentum to a movement that has already implemented energy policies that have devastated Europe’s most vulnerable. And now, with a Papal blessing, the push is on to impose the same in the United States and elsewhere in the world.”

“We should be prepared to accept a reallocation of the benefits and burdens that accompany humanity’s activities both within nations and between nations,” according to the Pontifical Academy of Sciences document.

Perhaps that is the true goal.