The biggest labor dispute in California just got more interesting. Hundreds of farm workers from Gerawan Farms went to Sacramento last week to demonstrate outside of the Stanford Mansion where Gov. Jerry Brown and members of the Agricultural Labor Relations Board celebrated their 40th anniversary. I was told by several people who attended the event that pro-United Farm Worker union representative Dolores Huerta attempted to intimidate Gerawan workers, and got physical with anti-UFW leader Silvia Lopez. But the Gerawan workers stayed strong and demanded, “Count Our Votes!” 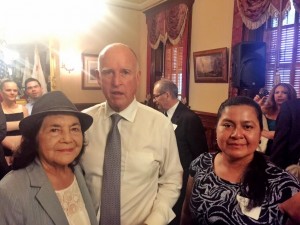 At the Sacramento celebration last week of the 40th anniversary of the Agricultural Labor Relations Board, one of the radical left’s most notorious UFW union labor leaders tried to prevent the new labor leader of the non-union farmworkers from taking a photo with the governor.

Darling of the left and an openly socialist admirer of Venezuelan President Hugo Chavez, Huerta has said publicly she believes that “Republicans hate Latinos.” Huerta encourages illegal immigrants to join with unions in agitating against their employers. She is an honorary chair of the Democratic Socialists of America and has praised dictator Chavez in 2006 for his policies in Venezuela, also asked, “why can’t we do that here in the United States?” the Blaze has reported for several years.

Silvia Lopez, on the other hand, is fighting for farm workers’ rights and liberties, and has been fighting since 2012 along side thousands of Gerawan Farming farm workers to oust the United Farm Workers labor union from their workplace.  ““We don’t want the union — we want the right to vote,” Lopez has told me numerous times. “And, we don’t need a union.”

According to witnesses, Huerta and some ALRB employees physically tried to prevent Silvia Lopez to be photographed with the governor. After being pushed and physically blocked by Dolores Huerta, Lopez finally made her way past Huerta and ALRB employees to meet Gov. Jerry Brown. The governor recognized the 16-year employee of Gerawan Farming, and called her “the famous Silvia Lopez.”

Ironically, Brown finally eventually coaxed the 85 year-old Huerta to pose with he and Lopez, for what some say the governor must have sensed would be an historic photo.

I heard from several attendees that Huerta was unhappy that Lopez was even at the ALRB celebration. Silvia Lopez became famous, as I have been reporting on for several years, for boldly resisting the bullying unionization of the farmworkers at Gerawan Farming.

Silvia Lopez, filed a federal civil rights lawsuit against ALRB board members and top staff, for their refusal to count the ballots from the November 2013 election.

On the same day of the ALRB 40th Anniversary celebration, Gov. Jerry Brown announced the appointment of nefarious ALRB lawyer Sylvia Torres Guillen, as special counsel in his office — rather than recommending her for disbarment.

Some are saying Torres Guillen was demoted. Workers said they wished her the best at the 40th anniversary party.

Last year, as general counsel of the Agriculture Labor Relations Board, Torres Guillen went to court to impose a union contract on Gerawan Farming employees, without proper input from the farm workers, and without counting the ballots of the 2013 United Farm Workers union decertification election. Torres Guillen has file many such actions, violating even the ALRB’s own rules and proper legal procedures.

However, what was even more interesting was that Brown released the information on Torres Guillen just after he agreed to accept the 800 signatures of the Gerawan Farmworkers, collected eight months ago, but ignored by the ALRB, that said they did not want to be part of the Union and asking for their votes to be counted. Some say Brown is sending a clear message that the ALRB is out of control and it is time to clean house.

Others say Sylvia Torres Guillen was kicked upstairs to a legal job in the governor’s office, as often happens in government with problem employees. 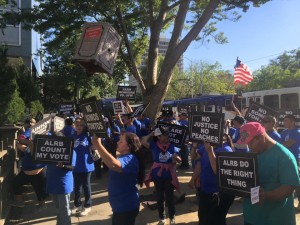 "No Justice, No Peaches"

Hundreds of the Gerawan farm workers rallied outside the ALRB gala, demanding the ALRB to count the ballots they cast in the 2013 de-certification election of the UFW.

Torres-Guillen led the effort to prevent the workers from voting in the first place. Then, when countermanded by her board, she led the campaign to have the ballots destroyed before they could be counted. The ballots still remain impounded by the ALRB, awaiting a decision by an ALRB Administrative Law Judge on whether they will be counted, or destroyed.

What should the state do with the thousands of farm workers who don’t want to be unionized? Most people think the workers should be free to choose and vote, or at least have a voice in the process. But that’s not what is happening. Au contraire; members of the Ag Labor Board have been working in cahoots with the desperate United Farm Workers labor union to force the workers and their employer into unionization.

Democrats in the Legislature, the all-Democrat Latino Caucus, and Gov. Jerry Brown have been silent for the three-plus years I’ve been covering this issue – as has the all-Democrat Agriculture Labor Relations Board.

With this kind of illegal behavior from gubernatorial appointees, it’s difficult not to wonder if this is Hugo Chavez’s socialist Venezuela, or America.