Making Water Out of Thin Air: One California Drought Solution

Imagine a way to extract water from humidity in the air, and turn it into a glass of pure drinking water. I just saw a machine do this. 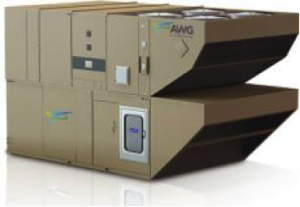 Pacific AirWell provided a water-making demonstration this week on the dead lawn at the Capitol.

With many communities around the state running out of water, and some chronically challenged with very little or contaminated water, these water making machines could be a portable, cost-effective answer for communities, businesses and homes.

“Today’s Capitol demonstration is the hands-on part of ongoing discussions with State officials to explore innovative ways to reduce the demands upon surface and ground water, and effectively mitigate California’s drought by improving the State’s drought resiliency,” said Matt Gray, Pacific AirWell CEO. “We are grateful for the support of lawmakers and look forward to bringing relief to the people of California.”

One of the Pacific AirWell techs filled me in on the operational processes of the machines. Atmospheric water generation is a technology-based process used to condense water from the air, then capture and filter that moisture into drinkable water. The Pacific AirWell machine collects water from humidity in the atmosphere. This air is chilled to the “dew point” and the moisture is condensed onto patented, stainless steel or specially coated coils, then channeled through advanced filtering chambers to provide a reliable source of clean drinking water. This technology enables significant amounts of water to be extracted from the air and purified efficiently at a relatively low cost per liter or gallon.

The Pacific AirWell 400 (above), the model on display outside the Capitol, is a commercial and industrial system that can produce up to 400 gallons of clean drinking water per day. The power source for the Water Pro 400 is three-phase electrical power; the unit can be easily integrated into the existing electrical utility system, using 25kW of energy. Pacific AirWell recommends this unit for Resorts and Hotels, Apartment Buildings, Hospitals, Disaster Response, Community Drinking Water and Hydroponics. 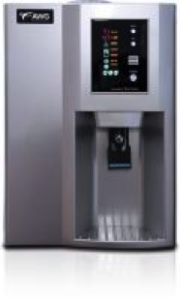 Model 2500 for home and office

There is an advanced filtering process which Pacific AirWell says is free from bacteria, known viruses, air pollution and metal oxide contamination. The water tasted clean and pure – no chemical taste.

How much energy does this take?

All Pacific AirWell models use electricity, with one special model using waste oil as the primary source of energy. The company says it is looking into solar energy models.

The residential Model 2500, for use in the home and office, uses only 550 watts of electricity, produces up to 10 gallons of water per day, just sitting on a counter in the home.

The Water Pro 100, designed for military use and community drinking water, uses waste oil as to power the cooling system, which is its largest demand for energy.  But the unit still requires some electricity to run the pumps and controls. It also has the ability to run on natural gas and propane when oil or diesel is not available, Pacific AirWell says.

Many Uses For Water Machines

California’s communities, farms and businesses are at risk of running out of water. The threat is estimated to cost tens of thousands of workers their jobs. The water generators can be linked together to provide one million gallons of water at each site, wherever there is electrical power and a moderate amount of humidity. The less the humidity in the air, the slower the water production. 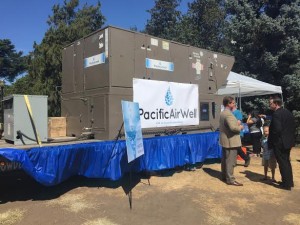 “The 20,000 gallon units are scalable and designed to connect to community water treatment facilities, and supply clean drinking water to farms, schools, or businesses,” Gray said.

The units are made in the United States, manufactured by Johnson Controls. They can be mounted onto foundations or towed as a portable trailer as the one on display at the Capitol was. Gray said a portable 20,000 gallon per day unit has just been finalized and is now being readied for production.

For California lawmakers and other state officials honestly looking for solutions to California’s drought crisis, this is one way to stave off emergency water shortages throughout the state.

“Water, water, everywhere, Nor any drop to drink.”

― Samuel Taylor Coleridge, The Rime of the Ancient Mariner