Sen. Hannah Beth Jackson’s SB 358: Not At All About Equal Pay For Equal Work

Yet another feminism-based bill by State Sen. Hannah-Beth Jackson, D-Santa Barbara, claims to “close the wage gap that women face at work.” So far, SB 358 has passed the Senate on a unanimous vote, 38-0, and now the Assembly with full Republican support. Republicans voted for this drivel. The bill also has the support of the California Chamber of Commerce. 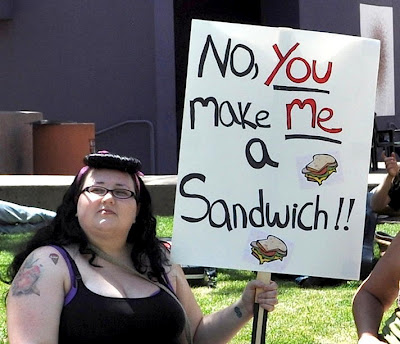 feminist at a protest

This is a profoundly bad bill that has nothing whatsoever to do with equal pay for equal work.

“Senate Bill 358, the California Fair Pay Act, would ensure that women are paid equally for work that is substantially similar to the work of their male colleagues, and do not face retaliation if they discuss or ask how much their male colleagues are paid. If signed into law, it would be the strongest equal pay law in the nation.

‘Equal pay isn’t just the right thing for women, it’s the right thing for our economy and for California. And it is long overdue. Families rely on women’s income more than ever before. Because of the wage gap, our state and families are missing out on $33.6 billion dollars a year,’  said Jackson. ‘That money could be flowing into families’ pocketbooks, into our businesses and our economy. After years of dealing with a persistent wage gap, the time is now for women’s paychecks to finally reflect their hard work and true value. It is time that we fix the wage gap that women face at work once and for all, and lead the nation in showing how it can be done.’”

SB 358  “mandates equal pay for ‘substantially similar work,’ which allows government and plaintiff’s lawyers to screw over every business in the state whenever they claim that two employees are working in “substantially similar” jobs, whatever the f**k that means, a attorney-friend told me this week.

SB 358 “upends 900 years of Western jurisprudence by shifting the burden of proof from plaintiffs to defendants, with California businesses having to prove that two different jobs are ‘not substantially similar.,” he said.

“The bill will lead to businesses being held up for ransom by rapacious trial lawyers who will have business defendants over a barrel from the outset of every single suit. It will explode the number lawsuits Cal businesses will be forced to defend.”

What did my attorney friend think Hannah Beth Jackson had in mind when she authored this inglorious meadow muffin of a bill?

I’ve long warned that legislation like this only leads to more gender discrimination in hiring. Businesses already shy away from hiring women out of fear of being sued and destroyed. “It will increase acrimony and resentment in the workplace by increasing the opportunities for ‘gotcha’ lawsuits that have nothing whatsoever to do with equal pay for equal work,” my attorney friend warned.

Yup. He’s right. I wasn’t a Human Resources Director for 20 years for nothin… I’ve seen it all, and witnessed how businesses recoil at intrusive regulations and nanny laws designed to “level the playing field,” but never really do; they only create a larger victim class, and ultimately, a larger welfare class.

It is disturbing that California Republicans support equal-pay legislation – Sacramento Business Journal reported. GOP Assembly leader Kristin Olsen has come out in favor of this travesty, and is falsely claiming that the bill is about “equal pay,” and that it will reduce workplace litigation. The ignorance is staggering. “This bill will be Exhibit A in every out-of-state business recruiters pitch kit to California businesses as they make the irrefutable case that doing business in California is toxic to their future,” attorney friend said.

I can’t repeat the other things my attorney friend said. Suffice it to say he and many others want to know what good are Republicans in the Legislature if they support such destructive laws?

▪ In both houses, the five highest-paid employees are men. Among the 41 employees across both houses who make $150,000 or more, 61 percent of the positions are held by men.

▪ Within specific job categories, the average pay for men and women is rarely equal. In higher-paid categories – such as chief of staff or chief consultant – men, on average, make more than women with the same title.

▪ When women make more than men with the same job title, it tends to be in lower-paid job categories, such as executive secretary or committee assistant – positions that are dominated by female employees.

Today’s feminism is victimization; it encourages blaming other people for mistakes, bad choices, and failures. The problem today is that feminists now push public policy.

“Do as I say, not as I do,” is the motto of Feminist Perpetrators and liberals. And hypocrites.