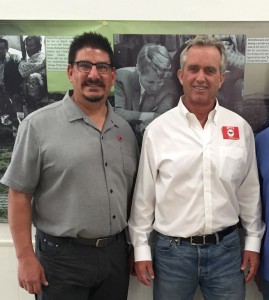 This interestingly timed PR move comes on the heels of the order to destroy farm worker’s ballots from the 2013 labor union decertification election, rather than allow them counted, by Administrative Law Judge Mark Soble, employed by the California Agricultural Labor Relations Board. Thousands of farm workers in California must now abide by an unwanted unionization deal struck decades ago and never ratified or enforced. The workers’ vote was expected to overwhelmingly support decertification, which would have removed the UFW union from Gerawan Farming Company.

Judge Soble’s  order to destroy the workers’ ballots came even after he found United Farm Workers Vice President Armando Elenes was “lying” to the Agricultural Labor Relations Board during testimony against Gerawan Farming. “As a result, for me, this seriously undermined the credibility of Elenes as to his other answers,” the Judge wrote in his decision.

Created by Gov. Jerry Brown in 1975 to protect workers, the ALRB now protects union leaders and organizers instead.

In the Democratic Party, individual free will takes a back seat to labor union agendas – even when it’s Latino farm workers who want to be free of the tyrannical union.

Serna and Kennedy need to meet and talk with Gerawan Farming worker Silvia Lopez before they write any more slanted newspaper op eds; Lopez is the future while they are doomed to the past.

The UFW labor union, down to a membership said to be hovering around a feeble 3,000 members from a high of 50,000, is desperate to take over the state’s largest farming company of more than 5,000 employees, to put the union back in the running again, By forcing the 5,000 Gerawan workers to pay 3 percent of their income to join the union, the ALRB would be more than doubling the UFW’s payroll. And they, together with a California state agency – the Agricultural Labor Relations Board — are working in cahoots, in tandem, to achieve this necessary goal, for both entities.

Without the other, neither is relevant any more.

Another Kennedy Living On Past Legacy

“Now it’s my turn to defend Chavez’s successors against equally dishonest claims that malign their character and offend the truth,” Kennedy wrote. She erroneously claimed the UFW is making gains in its representation of farm workers in California. “These gains are remarkable given virulent intransigence from growers. For example, thousands of workers at one of the nation’s largest table grape and tree fruit producers, Gerawan Farming Inc., won a union contract in 2013 under a recent UFW-sponsored law letting neutral state mediators hammer out contracts when growers won’t negotiate with them. This mammoth company, already owing its workers millions of dollars under the contract and accused by state prosecutors of multiple labor law violations, refuses to implement it and is taking its case to the California Supreme Court.”

Does that sound familiar? It should. It’s right out of the UFW playbook.

The motto of Robert F. Kennedy Human Rights is, “EXPOSE INJUSTICE. RIGHT WRONGS. TEACH CHANGE,” a motto they should practice, given that they are trying to force unionization on thousands of Latino farm workers who like their employer and don’t want to be unionized.

Another Politician Living on Father’s Legacy

Phil Serna, went to Delano last weekend to celebrate the anniversary of the grape boycott “that transformed American labor and grass-roots politics,” the Sacramento Bee reported. In 1965, the newly created UFW launched a the Delano Grape Strike and national boycott against California grape growers who refused to recognize the new union.

Serna, son of former Sacramento Mayor Joe Serna, is chairman of the Sacramento County Board of Supervisors, and sits on the controversial and overbearing California Air Resources Board. He remembers his dad hosting Chavez in his family’s Curtis Park living room.

“Today, roughly 400,000 farmworkers toil in California, some barely making minimum wage but others, such as unionized mushroom workers in the San Jose area, making $40,000 a year plus paid holidays and vacations and medical, dental and vision benefits,” the Sacramento Bee said. “State laws now also require fresh water and toilets in the fields and ban the dreaded short-handled hoe, which condemned farmworkers to hours of stoop labor.”

However, it may be as important to look at the UFW’s record:

Neither Serna nor Kennedy addressed this reality, and instead hang on to a distant past, dominated by their parents. 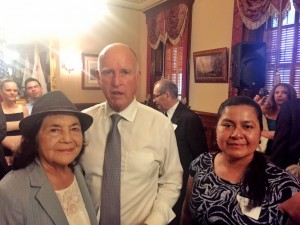 UFW co-founder Dolores Huerta was at the Delano event insisting, “Our work is not finished.” Huerta, one of the radical left’s most notorious UFW union labor leaders, is on video at the Sacramento celebration of the 40th anniversary of the Agricultural Labor Relations Board in June, blocking and pushing Silvia Lopez, the new labor leader of the non-union farmworkers, in an attempt to prevent Lopez from taking a photograph with Gov. Jerry Brown. (See video)

Silvia Lopez, a 17-year employee with Gerawan Farming, is fighting for farm workers’ rights and liberties, and has been fighting since 2012 along side thousands of her co-workers from Gerawan Farming to oust the United Farm Workers labor union from their workplace. “We don’t want the union — we want the right to vote,” Lopez has told me numerous times. “And, we don’t need a union.”

And, Lopez got her pic with the Gov.