A San Bernardino janitorial contractor has always paid his employees union-approved wages. But he has been kicked off public works job sites for so-called prevailing wage violations for five years now. The kicker? 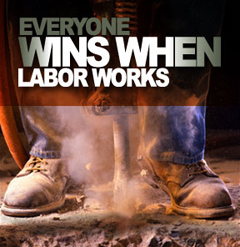 Three years ago I asked, “In what strange world do janitors get paid $45 per hour? In California, the land of the prevailing wage.” The answer today is still the same, only I will add, “In labor union-run California….” And today this janitorial prevailing wage rate is up to $48.50 per hour.

The strange and tragic case of Jeff Baron, proprietor of Baron Services, a janitorial service specializing in final clean up of big construction projects, is not complex – in fact, it’s crystal clear what’s going on. But it has become convoluted.

The crux of the issue is there is no Department of Industrial Relations prevailing wage classification for this specific type of construction clean up janitorial work. Baron explained that the going rate in the private sector for a basic janitorial job is between $10 and $15 per hour. But the Department of Industrial Relations states that the prevailing wage rate (which was $45 in 2013) is $48.50 per hour for construction-project janitors.

For $48.50 per hour, many people would be interested in putting their cleaning skills to work on construction clean up jobs.

Baron is in trouble because the large general contractor companies who hire him calculate the prevailing wage rate of $48.50 per hour in their bids to the government, but then refuse to pay him that rate. He said the general contractors in charge of the projects have been charging the state, and ultimately the taxpayers, $45 to $48.50 per hour for janitors on public works projects, but only pay their subcontractors, like Baron’s janitorial clean up company, $10 to $15 per hour for their final clean up janitors, and then pocket the rest.

Baron told me the labor compliance program of the DIR has been following him from job to job for years now, harassing him, and cracking down on him for not paying the prevailing wage of $48.50 to his employees. Then he is charged, punished and forced to abandon his cleanup jobs, and then charged back the cost of the replacement final cleanup crew, at prevailing wage rates. He said that he is not only out of a job, but he then has to pay the additional cost of the final cleanup to the general contractor. Is it any wonder he spoke out?

“I’ve stepped on their toes,” Baron said of the Laborers union and the DIR.

Baron has become a defacto leader for other janitorial businesses caught in this quagmire. But they too are afraid to speak out, and often just accept the punishments and fines from the DIR.

Now the state of California is prosecuting Jeff Baron as a criminal. The Riverside County District Attorney is prosecuting Jeff Baron, stemming from a complaint about a prevailing wage issue made by a labor compliance company under contract with the DIR. Now, instead of the case being about prevailing wage violations, the Riverside DA has blown Baron’s charges into tax evasion and Workers Comp Fraud – a white collar felony crime, for which Baron could go to jail if found guilty.

“As with any case we file, in this case we filed the charges we believe appropriate based on the evidence and that we believe we can prove to a jury beyond a reasonable doubt at trial. The evidence was presented to a judge at a preliminary hearing after which that judge determined there was sufficient evidence for the defendant to stand trial on those charges.

At this time, we will not be making any comment about the evidence in the case.”

It’s interesting that DA Mike Hestrin is the Riverside District Attorney who has been witnessed complaining to the Riverside Board of Supervisors that he does not have enough resources to prosecute real criminals, which is why he has to make so many light plea deals.

Baron has been asked by many why he won’t do a plea deal with the DA. “They won’t even offer me a deal,” Baron said in an interview. Oddly, the Riverside DA first filed charges against Baron in 2012, but kept continuing the case, as if holding it in abeyance their back pocket. “For 15 years I did my cleaning, and paid normal wages,” Baron said. “No one said a thing.” In fact, the DIR agreed with Baron in a letter, that mopping and cleaning windows is light janitorial, and not heavy general labor. “I just want to clean buildings,” Baron said.

So who stands to benefit in this case?