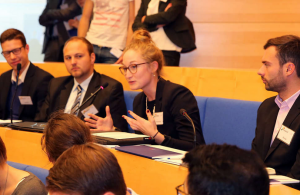 European politicos got a rare inside view of political campaigns in Europe and the United States at a pivotal conference conducted this week by the prestigious Konrad Adenauer Stiftung in Berlin.

The International Conference on Political Communication (IKPK) brings together a mix of American and European campaign experts for a discussion on the most interesting developments in the political world on both sides of the Atlantic.  For Europeans who often receive a distorted view of American campaigns through the lens of their own media, the IKPK provided the more than 300 German political observers with the opportunity to hear directly  from experts working in the field.

Conducted annually, the 15th IKPK provided me with the rare opportunity to de-mystify a key part of the American political process: just how does the Republican Party nominate a candidate for President?  For most Europeans, and indeed many Americans, this is a mysterious giant hairball of rules and votes that somehow, in some way, ultimately produces a nominee for President, and a Vice President.

When the Republican National Convention is held in Cleveland in July 2016, it will be the finish line in a lengthy process of 56 state and territorial votes to elect 2,470 delegates, of which 1,236 will be needed to secure the party’s nomination for President.

While Europeans may at time prefer a higher degree of uniformity than Americans in their rules and processes, the American nomination process is anything but uniform.  States vote at different times, award their delegates in different ways, have an array of methods for getting on the ballot, and have different rules about binding their delegates to their stated preferences.

I spent the bulk of my presentation walking the attendees through the process, noting along the way how the process could produce a nominee as early as March, or as late as June.   After doing my best to shine a light into the black box called “the primaries,” I gave a pitch for my preferred candidate for President, Ted Cruz, for whom I have the honor of serving as California Campaign Chairman.  In my  presentation I showed four videos: A discussion from Meet the Press about the coming Cruz Moment, an appearance by the Senator on Fox News’ Hannity, a Cruz spot called A Time for Truth, and a video compilation of the Senator’s recent campaign swing through the “SEC primary” states.

Highlighting how the Konrad Adenauer Foundation draws experts from multiple campaigns, participants also got to hear directly from Bush Campaign Manager Danny  Diaz, who provided an update on how the Bush campaign sees the race, and Vince Harris, who runs the digital media campaign for Rand Paul and provided some insight into the techniques that work, and those that don’t, with an increasingly online voting population.

As an American of German descent who frequently visits the country of my ancestors, I’ve often been amazed by just how the European view of American politics differs from what we see here at home.  Some of it is likely attributable to the fact that the entire European political spectrum is shifted somewhat to the left relative to the United States, but I suspect another contributor is how the news media covers American campaigns.

For the center-right political operatives and observers attending the IKPK, the perspective they received from this intensive two-day conference will give many some better tools with which to observe the incredibly exciting American campaign now under way.  Photos from the event are posted on my website here.