Compton Unified School District Authorized By 3.1% of Its Registered Voters to Borrow $350 Million

Preliminary results for the November 3, 2015 elections held in some California counties indicate that voters approved eight of the nine bond measures proposed by a total of eight California school districts. Voter approval means that the districts are now authorized to borrow a specific maximum amount of money for facilities construction by selling bonds to investors. The districts will pay back the investors over time, with interest, by collecting property taxes designated to paying off the bonds.

At this link is a chart (depicted to the right in miniature) that provides the latest preliminary data about the nine bond measures, the election results, and the current debt service from previous bond measures at the eight school districts: All California Educational Bond Measures Considered by Voters on November 3, 2015 Ranked by Percentage of Voter Approval

If election outcomes for these bond measures do not change, voters have now added another $972 million to the $146 billion previously authorized by California voters since 2001 to borrow for K-12 school and community college facilities construction. This is a minimal amount compared to the amount of potential bond authority anticipated to be on the ballot for the 2016 presidential primary and general elections.

A $208 million bond measure for the Walnut Valley Unified School District in Los Angeles County is the one failure. It is a little short of the 55% threshold needed for approval. A small but dedicated and informed opposition campaign (Real Grassroots Oh No! on “O” Movement) was able to educate district residents about the shortcomings of this proposed bond measure.

A $3.2 million bond measure for technology at the Placerville Union School District in El Dorado County is barely above the 55% threshold.

The most notable election result is at the Compton Unified School District.

Preliminary results show that the $350 million bond measure proposed by the district passed with 55.8% of the vote. 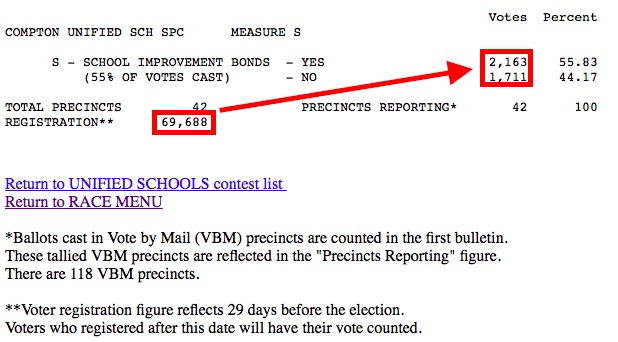 Out of 3,874 ballots on which votes were recorded, 2,163 votes were in favor of borrowing the $350 million via bond sales for facilities construction. Los Angeles County reports that the Compton Unified School District has 69,688 registered voters.

Include interest to be paid over the next 40-50 years to investors on the money borrowed via bond sales, and each Yes vote was probably worth about $300,000 in debt service for Compton Unified School District.

The lack of civic participation appears even worse when all residents of the district are considered. The Compton Unified School District has a total population of about 155,000 and includes the City of Compton, portions of the cities of Paramount and Carson, and surrounding unincorporated areas of Los Angeles County. Average Daily Attendance in the district has ranged between 23,000 and 23,400 for the past few school years.

Who were the 2,163 people who voted for the bond measure? After it was fairly certain that the bond measure had passed, the International Brotherhood of Electrical Workers Local Union No. 11 based in Los Angeles used its Facebook page and Twitter account to highlight its apparently substantive Get-Out-the-Vote activities in the district to pass the bond measure.