Reagan Sworn in As Governor 49 Years Ago This Month

When he took the oath of office at midnight on January 3, 1967, Governor Ronald Reagan assumed a $200 million budget deficit left by his predecessor, Democrat Pat Brown, whom he beat in the election by over one million votes. $200 million was a lot of money 49 years ago.  He was elected on a promise to reform California’s notorious “welfare state” and “clean up the mess at Berkeley” where student protesters were literally shutting down the campus. He had to freeze government hiring to stop runaway spending.  He even had to do the unthinkable for a conservative Republican – approve some tax hikes to balance the budget, as required by law.  But he transformed state government from weakness to strength, from fat to lean, and left office having achieving a budget surplus.  His time as Governor helped him shape policies that would carry him into the Presidency by 1981, where he cut taxes and reduced the growth of Federal spending, ushering in the biggest peacetime expansion of the economy in history, creating countless new jobs; and he invested in America’s military and set the stage for the fall of the Berlin Wall and victory in the Cold War.

Yes, Ronald Reagan was sworn in as Governor of California 49 years ago this month. 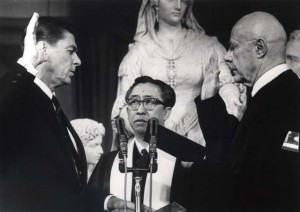