In a provocative and electrifying legal move, Gerawan Farming Company employee Silvia Lopez filed a legal brief to disqualify ALRB Board Member Genevieve Shiroma from the Agricultural Labor Relations Board, for bias and conflicts of interest. 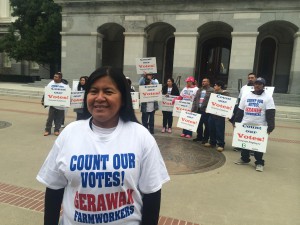 Lopez cites evidence of Shiroma’s close political ties with the United Farm Workers union, and long time Democrat political operative Richie Ross.   Silvia Lopez, a San Joaquin Valley farm worker, filed legal documents detailing payments over $120,000 from Shiroma to United Farm Workers’ Lobbyist Richie Ross, and documented Shiroma’s financial support of the author of a bill designed to help the UFW force itself on workers. UFW is the same union trying to force itself on the employees where Lopez works, as Lopez has fought for two years for her co-workers right to vote. Shiroma made the payments to the UFW’s lobbyist while she sat in judgment of issues directly involving that union, and while the workers ballots remain uncounted in a government vault

In 2013, I did an investigation of Shiroma and found some startling conflicts.

“In 1998, voters first elected Shiroma to the board of the Sacramento Municipal Utilities District, where she currently is vice president. The board elected her its president in 2002, 2006 and 2010. Currently she serves as its vice president.

Someone in a political position not surprisingly gets involved in politics. In local Sacramento politics, even more than in California, the Democratic Party dominates. She is a sponsor of the Harry S. Truman Democratic Club.

In 2006, as president of the board Shiroma led the battle for Measure L, which would have allowed the public utility to annex some of Pacific Gas & Electric’s private property in Yolo County. It lost, 61 percent to 39 percent.

“SMUD’s initiative on the November 7 ballot would have allowed the muni to annex about 70,000 PG&E customers in Yolo County in Northern California. PG&E spent more than $10 million to defeat the annexation, while the pro-annexation campaign spent about $1 million.”

The pro-annexation campaign was called SMUD Customers Say YES to Low Rates, and was led by Shiroma and other SMUD board members. The Sacramento Bee reported on Jan. 2, 2006:

Ross is one of the most influential strategists in Sacramento. A strike organizer for United Farm Workers longtime President Cesar Chavez, Ross now is a registered lobbyist for the UFW, whose cases go before the ALRB.”

(The Electric Utility Week and Bee articles no longer are online, but copies of them are in this document.)

Gerawan Farming, one of the Central Valley’s largest growers of peaches, plums, nectarines and grapes, and its employees, has been battling the UFW over unionization since 2012, before the Agricultural Labor Relations Board. The workers have been fighting off unionization by the UFW, while Gerawan has been fighting off unfair labor practice claims of the ALRB, among other claims.

Gerawan Farming workers spent months protesting the UFW takeover attempt. The UFW has maintained that a unionization vote by the workers more than 20 years ago still is binding, and the workers must begin paying union dues.

Led by farm worker Silvia Lopez, the workers have insisted that the union has done nothing at all for more than two decades. Lopez personally led a petition drive for a decertification vote.

In response, the ALRB charged the company, Gerawan Farming, with circulating the petition among its employees. However, Lopez and other employees said that they, not Gerawan, circulated the petitions. In 2013, Lopez and her co-workers filed a petition requiring the ALRB to hold an election for the workers to decide whether to allow the UFW to continue to represent them.

Shiroma, Chairwoman of the ALRB at the time, was in charge as the ALRB repeatedly blocked the workers’ right to vote.  Based in part on the publicity from my articles, the ALRB conceded and granted the farm workers the right to vote on the union contract in November 2013, but Shiroma and the ALRB ordered that the ballots be locked in a safe without being counted. The ALR Board continues to refuse to count the votes, and recently and ALRB Administrative Law Judge ordered the ballots destroyed.

Lopez says that Shiroma cannot be a fair and impartial judge in the workers’ case because of Shiroma’s longstanding professional and political alliance with the registered lobbyist for the UFW and the politicians in the union’s pocket.

The brief, filed by attorney Anthony Raimondo, says, “Among the workers’ complaints:

Raimondo also accuses Shiroma of making dubious political contributions: Shiroma is a major political donor who gives more than $10,000 per year to organizations and candidates who are allies of the UFW.  Lopez’s legal filing provides proof that Shiroma has recently given more than $42,000 in political contributions, all to left-wing candidates and causes, particularly those that are allied with the UFW. Shiroma donated cash to Senator Darrell Steinberg just before he introduced legislation to grant more power to Shiroma’s ALRB to force union contracts on workers against their will. Citing the Agricultural Labor Relations Act, the California Code of Civil Procedure, and the Code of Judicial Ethics, Lopez’s demand details how such contributions by an ALRB board member disqualify that member from adjudicating issues related to the UFW.

Lopez has demanded that the ALRB hold its members to the same ethical standards that apply to judges in courts throughout California, and disqualify Shiroma from sitting in judgment over them.