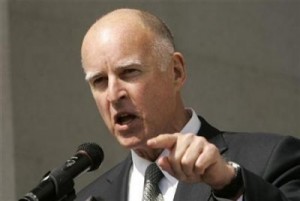 The minimum wage has always been an arbitrary figure. If the arbitrary minimum wage is inflated, this also inflates prices, leaving low-wage workers spending more on everything.

This political decision by Brown will likely come back to haunt California, much as the 1999 political pension deal signed into law by Gov. Gray Davis did. Davis gave huge pension increases to public employee unions, which are now consuming state and local budgets right to the brink of bankruptcy.

With one stroke of his pen, then-Governor Davis set up the state to sink into a pension abyss of more than half a trillion dollars of unfunded pension and health liability. Prior to being ousted in the subsequent historic recall election, Davis gave public employee unions nearly everything they asked for, including the outrageous pension promises.

Following in the footsteps of his father, former Gov. Pat Brown, who built much of the state’s historic infrastructure, including the California Aqueduct, Jerry Brown wants something to be remembered for… a legacy. However, his legacy is really infamy, and his ignominy will be for destroying the California dream. It will be his disgrace, his infamy, and his ignominy, rather than his legacy. By definition, one is only “ignominious” if deserving of the label.

Since he knew increasing the minimum wage to be a lousy business decision, Brown deflected Monday saying he had “moral” reasons to sign the state’s new $15-per-hour wage law. “Economically, minimum wages might not make sense. But morally and socially and politically, they make every sense because it binds the community together,” Gov. Brown said.

What he neglected to acknowledge about his “moral” decision is that he just gave yet another gift to big labor unions.

Who Needs A Collective Bargaining Agreement?

Many, if not most union contracts include automatic raises or renegotiations tied to the minimum wage, says Economist Richard Bergman. (Richard Berman: Why Unions Want a Higher Minimum)  “The data indicate that a number of unions in the service, retail and hospitality industries peg their base-line wages to the minimum wage,” Berman said. In fact, Berman has been saying this for many years, but no one on the left, and few on the right want to hear it.

The Center for Union Facts explains this in their analysis of collective-bargaining agreements obtained from the Department of Labor’s Office of Labor-Management Standards. In Labor Union Self Interest: Facts Behind Organized Labor’s Push to Raise the Federal Minimum Wage, the CUF explains: “In other cases, union contracts may order that the union and the employer go back to the negotiating table to discuss wage change following a minimum wage increase. This re-opens a process that would otherwise be settled until the next agreement.”

Who needs a collective bargaining agreement, when there are mandated minimum wage hikes until 2023, and after, the hikes are tied to inflation? It’s the gift that keeps on giving.

In California, the SEIU was a backer of the latest minimum wage increase. This was a small investment for the SEIU, for such a large potential windfall.

“All of those Democrats voted for the measure. All of the contributions were made Thursday, the same day the Assembly and Senate approved a bill that would raise the minimum wage in California to $15 an hour over the next six years, according to the campaign finance report.”

In 1999, Gov. Gray Davis signed legislation that gives public-safety employees (police, firefighters, prison guards, sheriffs’ deputies) a “3 percent at 50” pension plan. At age 50, employees can receive 3 percent of their salaries for every year worked, with a top payment of 90 percent of total final salary.

The legislation, which passed with wide bipartisan support but was pushed by Davis and largely by the Democratic majority, created an instant 50-percent annual increase in retirement benefits for public safety union workers. Jerry Brown is trying to lead the minimum wage debate, but from the wrong end. The debate needs to shift from the leftist topic of “worker inequality,” to getting back to a labor market that accurately reflects available labor and consumer prices.

Gov. Jerry Brown and most Democrats claim businesses will simply absorb the cost increases, demonstrating they are lying or simply too ignorant to understand the simple economics of business.

This the infamy in which the ignominious Jerry Brown is hanging his hat.