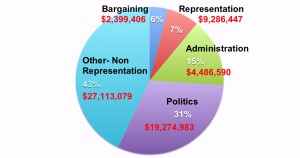 After several years of nasty legal battles with the SEIU to see where dues money is spent, the union members came to Grove and asked for her help. She allowed them to draw up two bills attempting at union reforms and transparency.

The SEIU employees have been educating union members of their option to opt out of paying the share of dues that is used for political purposes. This is information the Union does not tell it’s members. Union choice and transparency are almost impossible for its members because of the stranglehold public unions have on power. Grove’s bills would change this dynamic. “Americans rightfully demand transparency and accountability from their government officials,” said Assemblywoman Shannon Grove. “Why shouldn’t public union workers expect the same from their unions?”

Several of the union employees testified Wednesday in the Assembly Committee on Public Employment, Retirement and Social Security.

SEIU member Lisa Garcia, a 35-year state employee explained: “SEIU takes in over 60 Million dollars per year for Contract Negotiations and Employee Representation,” Garcia said. “What if through Transparency Efforts we could cut Union Dues by a minimum of 50% or more.  Doesn’t everybody want to keep more of their hard earned money in their own pockets, as opposed to giving it away to the Unions who refuse to account to us for what they do with our money?  There is strength in numbers, so please sign the petition and call your representatives and show your support.  We can only lose if people continue to be complacent!” 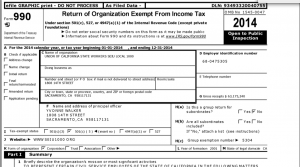 “I give you my money,” SEIU employee Mariam Noujaim said. “Show me how you spend my money, I will know how much you care for me, how much solidarity, and how much you work for us.” Noujaim has been trying to gain legal access, with the help of an attorney, to see how the SEIU spends the $60 million it takes in each year.

SEIU officials also testified, and claimed Noujaim, Garcia and the others were nothing more than “extremist groups – backed by the Koch brothers – to undermine working people’s voice in their workplace.”

Marcia Fritz, a Certified public accountant and president of the California Foundation for Fiscal Responsibility, took the SEIU to task for its claims that the books are already open and available to members, and claims that a local SEIU unit reports to the Fair Political Practices Commission.

After looking through the SEIU’s most recent Form 990 http://www.guidestar.org/FinDocuments/2014/680/475/2014-680475305-0c1d91b0-9O.pdf, Fritz explained after the hearing that the SEIU local 1000 does have a separate PAC that files FPPC reports, but most the money it receives goes to the national SEIU.  And it is interesting to note how much money goes to independent contractors – but the SEIU won’t reveal the names or who is receiving the money.

Fritz explained more about the SEIU Form 990:
“Note that Part III-A they answer “yes” to question 1 “were substantially all (90% or more) dues received nondeductible by members?” They do this to leave Part III B blank and avoid paying taxes on lobbying expenditures, which nonprofits are prohibited from doing unless they register as a political organization and disclose campaign contributions.”
“Since most of SEIU’s activities are “non-germain” this avoids having to disclose the portion that is lobbying vs. germaine.  That’s why a few members have requested arbitration in order to determine if the methodology used to calculate the portion of expenses that is political/lobbying is calculated correctly for purposes of calculating fair share dues for non germaine objectors,” which is what Garcia, Noujaim, and the other SEIU workers are.
“The 990 is really the only document available to members, which doesn’t give nearly enough information.  The salary section is a joke.  Also, note in Part IV, item 12a that the SEIU has NO independent audited financial statement.  The only audited financial statement is a consolidated NATIONAL report (item 12b).  So the testimony given by the SEIU representative is really misleading.”
Additionally, he says their PAC discloses all political contributions.  What he doesn’t say is the SEIU 1000 payments to their PAC is controlled on the national level and contributions go all over the place.  It’s similar to the mortgage bond industry (The Big Short) that consolidated mortgages and sliced/diced them to sell to investors.  SEIU does the same thing” it consolidates PAC money from locals all over the nation and doles it out to candidates as it sees fit.  SEIU members don’t really SEE where their political donations go–because they can’t.” 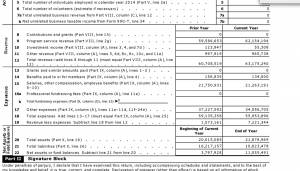 Lisa Garcia explained that with a $60 million budget, it’s very difficult to determine how much of the money goes to political spending. “I’ve been told it’s 34 percent, or a little more, but since they’ve never revealed their documents, there is no way to determine this.”

The coalition of public labor union reformers put together the following video to advocate for union choice and transparency.

Fritz says the bottom line is the forms the SEIU files with the IRS do not give enough detail. “The IRS does not require the same stringent rules as private sector unions have. I managed a national non-profit, and they are required to provide access to the records to members. Labor unions do not have that requirement.”