Trump Is The GOP Nominee — Where Does That Leave Me?

The GOP Presidential primary ended fairly abruptly earlier this week. For my part I came home from the seemingly-relevant California Republican Party convention more excited and motivated to help elect Senator Ted Cruz than ever. Having had an opportunity to hear in person from all three candidates at mealtime speeches, the contrast between the three was stark, and clear. 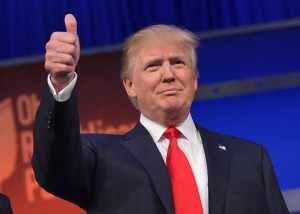 Ted Cruz presented himself as a strong constitutional conservative, an ideologue committed to our United States Constitution and ready to fight to make our nation a better place. Governor John Kasich of Ohio reinforced in his remarks that were he the nominee he would be the latest in a failed lineage that most recently has included John McCain and Mitt Romney — an establishment favorite who would seek to embrace the failed status quo on Capitol Hill rather than reject it.

And then there was Donald Trump. Sitting through his non-substantive remarks, filled with name-calling and one-liners, I found myself anxious for that moment in a serious address when the speaker pivots away from the lighter “icebreaker” introduction and digs into the real issues and challenges facing our nation. The pivot never came as I observed a showman, obsessed with himself, who clearly is enjoying the spotlight. One came away truly wondering if it is actually the campaign itself that is alluring to Trump, rather than the task of actually leading the nation. In fact, I came away from that lunch completely unconvinced that Trump has the strength of character, let alone the commitment to a set of values and principles, to truly be a great leader of any country – let alone the United States of America.

Perhaps most frustrating about Trump is that he is such a flawed warrior in the battle against political correctness. So much of what the left has foisted upon us is such utter crap. But “Trump as culture warrior” falls flat on its face because replacing political correctness with rudeness and being a jerk in the long run makes our efforts to bring good values back to our society that much harder.

Yet, just a few days later, the largely binary choice between someone I believe to be a man of strong character and principle — versus someone who seems totally consumed in idolatry of self — evaporated.

And now I sit here, as someone who has not only worked hard for nearly thirty years on conservative causes, but for Republican causes as well. There is a distinction between these two of course, but now is seems there is a virtual chasm between the two.

For conservatives, the end of Cruz’s candidacy marked the end of any opportunity have a conservative succeed Barack Obama in the White House – the first real chance to have a strong conservative ideologue as our President since Reagan departed Washington, D.C. in 1988.

So what now? What is the road forward at this point for those committed to intellectual conservatism? For those who believe that more than ever the path to a prosperous future for our democratic republic will be found in looking back the genius of its founding?
We face two unappealing choices.

Between the pretender who has usurped my party’s nomination, a celebrity who has perfected using his irate temperament to capture the votes of so many GOP voters, many righteous in their anger at the establishment leaders of our party who idolize those on Wall Street and K Street to a point whether the average American feels unrepresented on Capitol Hill…

And Hillary Clinton – who has a definably ideology, which is evil. She is corrupt, and represents at best another four or eight years of left-wing policies advanced by our current President.

Wow this movie just doesn’t have a good ending.

So what am I to do? This is where an effort to thoughtfully reason through a tough predicament falls prey to something more… physical. Which is that when I think in any meaningful way about Donald Trump being my party’s nominee for President, or being President, I get sick. Not a “rhetorical prose” kind of sick. But rather I feel unwell physically. Imagine mixing one part nauseous, one part dread, and one part hopelessness into an amazingly toxic cocktail and then going bottoms up. That’s where I am.

As a conservative, I will never find Trump appealing. Like ever.

As a Republican, I will once again be asked to “overlook the flaws” of our nominee and charge into battle against the Democrats. That certainly isn’t something I feel like doing today, or really can imagine doing at all. I had similar if less intense and illness-inducing thoughts about McCain and really didn’t end up doing much to help his candidacy. I’m not a very good “situational voter” — my vote has to be earned by a candidate in whom I believe. If there is no such candidate on the ballot, I just won’t vote for that office.

For now I think I will spend some time figuring out where to take my family during a week in July that had been previously blocked out to go to Cleveland. Somewhere tropical… Preferably with no television.