A California Appellate Court struck down California’s compulsory contracting statute as unconstitutional, and set aside the ALRB-ordered contract against Gerawan Farming and its workers. 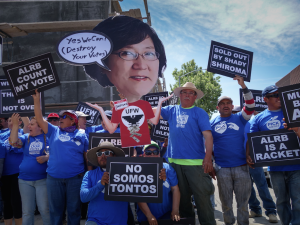 The May 9, 2016 decision by the Fifth District Court of Appeals in Fresno just handed farmworker Lupe Garcia a win in his battle for constitutional rights against the United Farm Workers and the California Agricultural Labor Relations Board.

Garcia challenged his right to attend portions of the binding formation process known as the Mandatory Mediation and Conciliation, after being locked out by the ALRB. The court reversed a lower trial court that had favored the ALRB, finding a state law to be unconstitutional.

The win means that employee Lupe Garcia, who works at Gerawan Farms in Fresno, will have his lawsuit against the Agriculture Labor Relations Board go forward.

It also means for Garcia and the thousands of Gerawan farmworkers, their case will be heard.  “The Board has continued to put up barriers at every stage of this proceeding to keep the farmworkers’ will suppressed, and we look forward to having this important, democratic issue decided,” attorney Paul Bauer said.

The legal case is the result of a years-long battle between the farm workers at Gerawan Farming, and the United Farm Workers labor union, which tried to force several thousand workers into the labor union despite the workers’ decertification election to oust the union once and for all.

Lupe Garcia and Gerawan sued the ALRB in Fresno County Superior court over ALRB members’ refusal to allow Garcia to attend mediation meetings on the contract. Garcia requested the ALRB‘s permission to attend and observe the on-the-record phase of the MMC process, where evidence and argument would be presented by the parties to the mediator on all disputed issues, Bauer explained. Ironically, the ALRB denied Garcia‘s request claiming he was not a party to the Mandatory Mediation and Conciliation. Then, rubbing salt into the wound, issued a policy decision that members of the public have no right to attend MMC proceedings.

“Pursuant to Labor Code section 1164 et seq., if an agricultural employer and a union certified to represent the agricultural employees of that employer have failed to reach an initial collective bargaining agreement, the Board may, if requested by one of the parties and certain statutory conditions are met, order them to undergo a binding process referred to as mandatory mediation and conciliation,” Attorney Bauer said in a press statement. “In the MMC process, after an initial 30-day period of voluntary mediation is exhausted, a decision-maker (the mediator) takes evidence and hears argument from the parties on all disputed issues (the on the record phase of the MMC process) and then submits a report to the Board stating the mediator‘s findings on what he or she believes the terms of the CBA should be. When the report becomes the final order of the Board, it establishes the terms of an imposed CBA to which the parties are bound.”

“In his request to the Board, Garcia argued that he and other members of the public had a constitutional right of access to the on-the-record portion of the MMC process,” Bauer said. “In response to the Board‘s no-public-access ruling, Garcia filed a declaratory relief action in the trial court, seeking a judicial declaration that the Board‘s ruling violated a right of public access protected under both the federal and state Constitutions. The Board demurred on the ground that the trial court lacked jurisdiction because Labor Code section 1164.9 limited all judicial review of the Board‘s rulings in such cases to the Court of Appeal or Supreme Court. The trial court agreed with the Board and sustained the demurrers without leave to amend. Garcia argued that (1) Labor Code section 1164.9 did not preclude the trial court from exercising jurisdiction because that section is unconstitutional and (2) the Board‘s no-public-access policy violates a right of public access to civil proceedings protected under the federal or state Constitution, or both.” 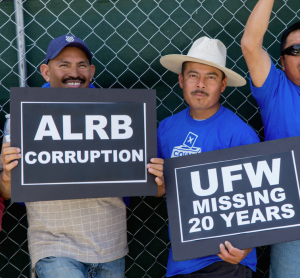 I attended the Fifth District Court of Appeal hearing in Fresno April 20. California Deputy Attorney General Nelson Richards told a three-judge panel “It has never been a right” for farm workers to sit in on labor mediation meetings, and never should be.

“I can only imagine why the general public is not allowed in,” attorney David Schwarz said in court.

“Mr. Garcia only wanted to ask, ‘Can I step into the room and see what’s going on?’” Attorney Bauer told the court. “The silence is deafening, and spoken loud and clear to Mr. Garcia when the door closed in his face when he wanted to know about his wages, working conditions, seniority…” Bauer called the ALRB “Bureaucratic Tyranny.”

Bauer told the court that Lupe Garcia made the 100 mile trip to attend the 2013 meeting with 15 other workers to find out what was going on. But it was the UFW and ALRB attorneys who decided not to let Garcia observe the MMC proceedings. “They were told they could read about it in a transcript,” Bauer said.

Bauer asked the Agricultural Labor Relations Board, which represents the workers, to let them in to the meeting, but was told, “No. You’re not a party to the process.” The ALRB told Bauer and the workers that the UFW represents the workers. “It was such a juxtaposition to suggest they were adequately represented,” Bauer said. The ALRB said Mr. Garcia was not a party to the proceedings, has no standing, and barred him from his own proceedings. “He’s left wondering, ‘what are they trying to hide,’” Bauer told the court.

Last year, the same three-judge California appeals panel struck down the section of state law that allows the ALRB to force UFW contracts on farmworkers, and ruled that section of the law, unconstitutional.

The judges agreed that the ALRB should have allowed Gerawan Farming to prove that the UFW had abandoned thousands of its members for two decades. “More fundamentally, we agree with Gerawan’s constitutional arguments that the MMC [mandatory mediation and conciliation] statute violates equal protection principles and constitutes an improper delegation of legislative authority,” the Fifth District Court of Appeals judges ruled.

Farmworker Silvia Lopez alleged as a plaintiff in the suite that the ALRB was violating her Constitutional right to freedom of association. The three judges agreed.

The ruling showed that Gerawan Farming and  Silvia Lopez were truthful all along, while the ALRB’s general counsel Sylvia Torres-Guillen, and its Visalia director Silas Shawver, were clearly in the wrong.

ALRB Lawyer: Workers Have No Right To Witness Negotiations

Deputy Attorney General Nelson Richards, representing the ALRB, said in his argument that neither the employee or employer had the right to be in the negotiations, but acknowledged when asked by the judges, that the union is allowed to have as many employees in the proceedings. Richards claimed it was the policy of the National Labor Relations Board. “Why can’t other employees come in and observe the proceedings when it impacts their employment?” Presiding Judge Hill asked. “There’s no historical precedent for this,” AG Richards said. “The MMC follows the federal MMC – it’s confidential.”

“So the bargaining unit can bring in anyone, but because it’s confidential, can bar other employees from watching?” Presiding Judge Brad R. Hill asked.

UCLA law professor Eugene Volokh, representing the California Newspaper Publishers’ Association, told the justices that mediation meetings function similar to a bench trial and should be open to the public.

“The Court of Appeal agreed with Garcia on the first point, and sent the action to the trial court on the second,” Attorney Bauer said. “As to section 1164.9, it held that its absolute preclusion of superior court jurisdiction, even in exceptional circumstances where as with Garcia the sole statutory mechanism for judicial review was unavailable and constitutional rights were at stake, impermissibly divested the superior court of its original jurisdiction without an adequate constitutional foundation for doing so.”

“While we are happy to return to the Superior Court and win again there, we wonder why the ALRB persists in its blatantly unconstitutional policy of barring workers from proceedings where their working conditions and wages are being addressed,” Dan Gerawan said. “We call on the ALRB to rethink its position and agree to open proceedings even if the UFW wants them closed. The ALRB must protect workers first and foremost. The secret hearing policy is obviously unconstitutional and the ALRB should stop wasting taxpayer dollars defending it.”