For many years, Rich States, Poor States, Tax Myths Debunked and other ALEC publications have warned against overreliance on state level income taxes – on both personal and business income. The reasons are numerous and range from the adverse economic effects of the taxes, to purely public finance objections, such as the volatile nature of income tax revenues.

Recently, even liberal Governor Jerry Brown joined in the chorus and admitted Sacramento’s overreliance on income taxes has now caused some serious budget problems for the Golden State. This is more than somewhat ironic, since the governor helped pass the very same income tax hikes that exacerbated the problem. A headline from Tax Notes read “California Governor Says Dependence on Income Tax Hurts Revenue Stability.” The story goes on to report that “California’s tax revenue in April was over $1 billion less than projected, and according to the summary of Brown’s May budget revision, the state is predicting a shortfall of $1.9 billion over what was forecast.” Many on the political Left rejoiced when, in 2012, California increased taxes and retroactively saddled hardworking taxpayers with the highest marginal personal income tax rate in America – a shocking 13.3 percent. California also has the most “progressive” income tax in America according to the 2016 edition of Rich States, Poor States.

Proponents of California’s tax and spend agenda heralded the tax increases as a lifesaver for the state. A euphoric headline from The Nation in 2014 read: “How Jerry Brown Got Californians to Raise Their Taxes and Save Their State.” Left wing hero Paul Krugman of the New York Times wrote a 2014 column entitled “Left Coast Rising,” which criticized tax-cutting states like Kansas, while praising California for raising taxes and claiming “California’s success is a demonstration that the extremist ideology still dominating much of American politics is nonsense.” The leaders Krugman cites of this so-called “extremist ideology” are public finance experts like Dan Mitchell at the non-partisan Cato Institute, who also warned about the unintended consequences that would likely, and eventually did, result from the 2012 tax increase in California.

Relying less on highly-volatile revenue sources, such as corporate income and personal income taxes, makes revenue collections more stable and the budgeting process far more predictable. The figure below demonstrates broad-based consumption taxes, like retail sales taxes, are among the least volatile sources of revenue, as sales generating the revenue generally do not fluctuate nearly as much as capital-based taxes. 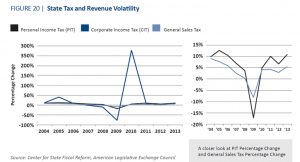 Incentives matter, and taxes directly affect where people choose to live, work and invest. All taxes affect incentives, but not all taxes are created equal. The vast majority of research indicates personal and corporate income taxes are among the worst taxes for state growth. Given this fact, it is not surprising that states across America are looking for ways to reduce income taxes. In 2015, 10 states cut their personal income tax burdens, and eight states reduced corporate income tax or business franchise tax burdens.

In the past weeks alone, Tennessee lawmakers voted to eliminate the state’s Hall Tax on investment income. Not only will this be a boon for economic growth, but it will also provide more stability and predictability for Tennessee’s tax revenue moving forward.

Hopefully, the story of Jerry Brown and California’s failed experiment with the unreliable and economically damaging income tax will serve as a cautionary tale for other states and remind them of an essential policy axiom: it is impossible to tax your way into prosperity.

Jonathan Williams is vice president of the ALEC Center for State Fiscal Reform and co-author of Rich States, Poor States.