The Labor-Management Cooperation Act of 1978 is rearing its ugly head once again in the California Legislature, as it roars to the end of the 2015-16 session. The idea behind the “Labor Management Cooperation Committee” ostensibly is to improve communication between representatives of Labor and Management, expand and improve working relationships between worker and managers, and to ensure health and safety working conditions in the construction industry, among other stated goals. But really, it is to put non-union companies out of business. 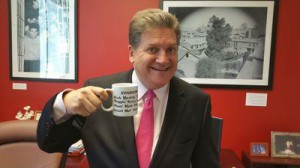 Senate Bill 954 by Sen. Robert Hertzberg, D-Van Nuys, would redefine what benefits employers can pay into as part of their obligation to pay workers on public works projects the prevailing wage. Specifically, the bill qualifies certain prevailing wage benefit payments, but only if they are made by an employer “obligated under a collective bargaining agreement.”

What this means is that non-union groups will be excluded.

“SB 776, authored by Sen. Ellen Corbett, D-San Leandro, but written and sponsored by the union labor group State Building and Construction Trades Council of California, appears to be an effort to eliminate monitoring and enforcing prevailing wage laws through independent compliance audits and the enforcement of building contractors.

The targeted independent compliance group, the California Construction Compliance Group, is a  non-profit organization that promotes free, open and vigorous competition in the building and construction industry. On its website, the CCCG explains that it does this “through monitoring, enforcing and evaluating changes to prevailing wage and apprenticeship laws in an effort to promote equal opportunity among prevailing wage contractors.”

The California Construction Compliance Group had a proven track record – it was good for the workers and employees, but loathed by labor unions. They uncovered more than $500,000 of worker wages and benefits that had gone underpaid. They reported those claims and recovered money for the workers. But as then-CCCG Executive Director John Loudon explained, labor representatives thought that any other group auditing to uncover lost wages was a bad thing if that group was not union. So the numerous labor organizations, which are regular guests in Democrat legislators’ offices, sponsored Senate Bill 776 that said Loudon’s organization could no longer work because they were not part of a collective bargaining agreement. The Legislature passed SB 776 and Gov. Jerry Brown, also a regular on the labor union circuit, signed it onto law.

Loudon then had to limit their work, and rebrand as the California Construction Advancement Group.

Under an obscure provision in California’s prevailing-wage law, Loudon explained $8.09 per hour is contributed for Sacramento electrical workers to union-affiliated trust funds — more than $15,000 a year of taxpayer-funded contributions for every single employee.

This is particularly egregious as taxpayers look for money to build new schools all across the state. Even as Governor Jerry Brown struggles to fund his High Speed Rail boondoggle, requiring taxpayers to pay $15,000 for every electrician with no idea what that money is buying, is reckless. There is no mandated public reporting and Senator Hertzberg’s bill will not change that.

Prevailing-wage rates include pay plus fringe benefits, which include health care and retirement, and another dubious category called “other.” This “other” category forces employer payments for “industry advancement” activities to benefit both nonunion and union workers. Interestingly, the Department of Industrial Relations authorized nonunion groups to also receive this funding.

Hertzberg’s bill does not allow employers to take credit for paying workers the prevailing wage if the union collective bargaining agreement requirements are not met – thereby freezing out Loudon’s association once again.

The degree to which lawmakers like Hertzberg lie is really something. Prevailing wage in California is frankly whatever wage labor unions set.

At the April 6 hearing, Hertzberg mischaracterized the employer payments as ‘wages.’ The total prevailing wage separates worker pay, fringe benefits, and these “employer payments” that are a third category. No union worker ever sees this money. So it is not a matter of protecting wages as Herzberg claims; it’s not just a game of semantics, nor does “it depend upon what the meaning of the word ‘is’ is.”

Senator Hertzberg identified John Loudon in the audience as “the other payments guy. He’s the guy who gets the money that I’m trying to get, that’s why he’s so upset.” It was a rare candid admission by Hertzberg that he is trying to oust non-union merit shop resources and funding by legislating them out of this Labor Management Cooperation Committee funding requirement.

The Legislature passed Senate Bill 868 in 2003 as a last minute “gut and amend” bill.  It made these union “employer payments” part of the prevailing wage, so even non-union companies have to pay out these funds, and pass that cost to taxpayers for the first time ever. These payments are not mandated under the prevailing wage in any other state, and are a separate union arrangement.

At the April 6 hearing, Hertzberg claimed “where there is a collective bargaining agreement under the constitution of the United States it protects the sanctity of contracts,” as if he cares about the right to contract. If he did, his bill would not eliminate non-union workers from being able to contract to protect their work.

Loudon said nonunion contractors will continue to be forced to make those same payments, but unions want to remove the ability of non-union construction workers to pool their resources and defend their jobs. “With SB 868, however flawed, union and nonunion contractors were treated the same,” Loudon said. Their ‘other’ column funds could go to monitor and enforce prevailing wage law and and support industry advancement. SB 954 is a total departure, a 180 degree turn from what unions promised lawmakers at the time. SB 954 is a frontal assault on non-union contractors and construction workers.”

“This is not about protecting worker’s wages,” Loudon continued. “This is about the labor groups coming and trying to silence one voice and eliminate the ability of nonunion workers to have a voice in the political sphere in the educational efforts that industry advancement programs engage in now.”

Loudon added: “With this act, the Legislature will silence speech. This is a very hard partisan action that will silence the speech of 85 percent of the workers in the state who are non-union who will have an inability to contribute funds to these activities. And I think that’s a very sorry action to take.”