Your Public Comment Can Help Keep CalExit Petitions Off the Street, Where They Don’t Belong

UPDATE! Here are the 39 public comments submitted to the California Attorney General on the proposed Calexit secession initiative for California:

Wednesday, December 21 is the last day to submit public comments to the California Attorney General regarding the proposed initiative called “Calexit: The California Independence Plebiscite of 2019.” You can and should submit a comment citing reasons why Attorney General Kamala Harris should NOT give it an official title and summary. (Go to the public comment page and fill out the form.)

Ridiculous as it sounds, this secession campaign should not be mocked. Stranger things have happened in history. There are certain circumstances that could allow CalExit to appear on a future ballot and even pass:

The best way to avoid this future crisis is to exercise the checks and balances in our American constitutional republic to keep it from ever getting started.

In 2015, Attorney General Kamala Harris asked for a court order to relieve her from her legal duty to provide an official title and ballot summary for Initiative No. 15-0008. She argued that the proposed initiative was “invalid” because it was unconstitutional on its face, its unconstitutionality was clear, and its submission to voters would serve no legitimate purpose. It would also be a useless waste of resources and create emotional community divisions. (See her Complaint for Declaratory Relief.) A judge agreed with her, ruling that “preparation and official issuance of a circulating title and summary for the Act by the Attorney General would be inappropriate, waste public resources, generate unnecessary divisions among the public, and tend to mislead the electorate.”

It doesn’t take a constitutional law professor to see that “Calexit: The California Independence Plebiscite of 2019” has all of these problems: 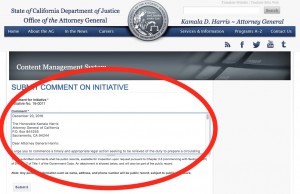 I submitted a public comment urging the Attorney General to “commence a timely and appropriate legal action seeking to be relieved of the duty to prepare a circulating title and summary for Initiative 16-0011, informally titled “Calexit: The California Independence Plebiscite of 2019.” (See An Early Shot of a California Unionist Against Calexit.) You can do the same by going to this comment page. Deadline to submit comments is December 21, 2016.

Kevin Dayton is a public policy consultant and the President & CEO of Labor Issues Solutions, LLC. He has 20 years of sometimes-frustrating professional experience working on California state and local policy issues from a perspective of free markets, limited government, and fiscal responsibility. Follow him on Twitter at @DaytonPubPolicy.