Jerry Brown’s BIG Green Budget is in The Red

Even with “the most progressive tax system in the United states,” California Gov. Jerry Brown is facing huge deficits, and cannot balance the state budget. The huge $180 billion state budget proposal for 2017-18, may be another record budget but for millions of Californians, it’s still record stagnation and less income. 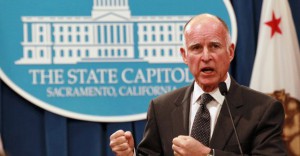 Brown has presented yet another budget fairytale that will have $5.8 Billion in deficits over the next three years – even with the recently passed ballot tax of $10 Billion in new tax revenue. And the budget does little or nothing to pay down more than $240 billion in state debt.

Why? Because personal income tax, corporate, and sales tax projections are down.

“Why are the personal income tax, corporate and sales tax projections down?” you ask.

Because, as I recently explained, “Californians are living a nightmare, the likes of which could only be conceived by leftists: The highest housing costs in the country, highest poverty in the country, highest taxes and regulations in the country, the worst performing schools, high unemployment and a part-time service economy, explosive healthcare costs, the most illegal aliens living in any state, one-third of the nations’ welfare, a growing, radicalized government, the labor union tail is wagging the dog, a soaring crime rate with politicians emptying out the prisons and jails, while simultaneously passing Constitutionally dubious gun control laws, and legalizing marijuana. It’s a recipe for disaster.”

The focus during Brown’s 2017-18 Budget press conference was climate change policy and spending, increases in spending on childcare, High Speed Rail rather than road improvements, and another $2.2 Billion for the faltering green economy with cap and trade, which Brown promised to double down on.

Brown admitted California is in a very lonely fight against climate change, but stubbornly said, “the science is not going to change. Even reluctant opponents will have to change.” As for the satellite he threatened to launch to collect climate data, Brown said “if things get drastic, I don’t rule out anything on the part of California.”

“It’s clear to me that this legislature’s gamble means politicians are betting it all on the one theory that allows them to dictate every aspect of our lives with huge consequences to freedom, opportunity, prosperity and job creation, the cost-of-living and economic upward mobility,” Assemblyman Jim Patterson, R-Fresno said.  “This theory is costing Californians hundreds of billions of dollars and provides no cost-benefit analysis and no evidence that it will moderate global temperatures in any meaningful or measureable way.”

Brown’s state budget plans to pay for transportation funding by increasing the gas tax on drivers – again – to pay for the excess of long overdue state highway repairs of nearly $60 billion, and $72 billion for local streets.

“If California was forced to create a real budget like businesses have to, this state would be nearly insolvent,” said Patterson. “No responsible organization except the government of the state of California would hide nearly a trillion dollars in debt from unfunded pension liabilities. This budget is nothing more than smoke and mirrors.”

Brown’s budget includes $52.2 million for the implementation of the system to regulate marijuana.

Affordable Care Not So Affordable

Brown said the state already spends more than $1.8 Billion on Medi-Cal, the state’s welfare medical system. California receives $15 billion in federal funding for the costs of Obamacare’s optional expansion of Medi-Cal, according to the Sacramento Bee.

With concerns over the Trump administration’s promise of the repeal of Obamacare, future health care costs loom large for California and the Medi-Cal system.

California takes in more than $100 Billion in federal funding, with the bulk of it going toward health care.

Lawmaker’s Comments on the State Budget

“It is terribly irresponsible, however, for the governor to continue to waste millions of taxpayer dollars on his pet High-Speed Rail project, instead of fixing our dilapidated roads and highways and building much-needed water storage,” said Sen. Andy Vidak, R-Fresno.

“Gushing rivers are flowing into the ocean right now because we haven’t built enough water storage to capture them. Our roads are disintegrating even though we had billions in surplus state revenue just last year. This is clear evidence that California needs to get its spending priorities straight,” said Sen. Ted Gaines, R-El Dorado. “Instead we are squandering money on the ridiculous high speed rail and paying for sex changes for prisoners.

“The clear takeaway from Governor Brown’s extremely vague 2017-18 Budget announcement is that California’s chief executive has no clear plan to address the dire fiscal condition of the world’s 6th largest economy,” said Assemblyman Travis Allen, R-Huntington Beach. “Despite the collection of $10 billion in new tax revenues, California is now slated to run a $2 billion deficit to be solved with accounting gimmicks.”

“Rather than addressing California’s very real challenges, Jerry Brown and California Democrats have been more concerned about antagonizing Trump, launching satellites, and raising taxes, while California sinks further into debt,” Allen added. “This is not responsible leadership that is concerned about the wellbeing of ordinary Californians. Brown’s dance today on the California budget only serves to extend the failed leadership of tax and spend California Democrats. To quote Governor Brown, California needs to “save your money or lose the farm.” Contrary to the Sacramento delusion, Jerry Brown is losing the farm.”

“We are on the cusp of a financial crisis and Sacramento cannot rely on tax and fee increases to address them, like the $10 vehicle registration fee increase of last year (which is a ‘pension tax’),” said Senator John Moorlach, R-Costa Mesa. California families deserve better.
“The Governor must also be careful not to jeopardize federal funding for our counties and cities. California must plan for the future, work constructively with our federal partners in Washington, and prioritize strong leadership to address California’s more than $260 billion in unfunded liabilities and $80 billion in deferred road repairs.”