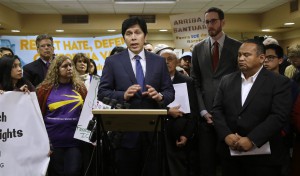 Senate President Pro Tem De Leon, D-Los Angeles, the author of SB 54, says that “immigrants are valuable and essential members of the California community” and all attempts to enforce immigration laws create fear of the police among “immigrant community members” who fear “approaching police when they are victims of, and witnesses to, crimes.”

Despite the wave of refugees coming to the United States from Syria and Iraq under the Obama administration, California Democrats are denying national security issues, in favor of political opportunism. California is home to the largest illegal-alien population in the country, with 35 sanctuary cities. President-elect Trump has vowed to build a border wall and deport immigrants that have a criminal record, which he estimates to be two-three million.

Several bills authored by Senate Democrats in the California State Legislature are meant to be a thumb in the eye of President Donald J. Trump over immigration laws.

The third bill, SB 54 by Sen. Pres. Pro Tem Kevin de León, heard Tuesday in the Senate Public Safety Committee, seeks to restrict local police and sheriffs from working with federal immigration enforcers. SB 54 prohibits law enforcement from responding to federal requests for notification when a jail houses someone who might be the subject of an immigration enforcement action. Whether the immigrants are here legally or not, and whether they have committed crimes in the United States, this bill effectively prohibits communications between local law enforcement and federal authorities.

Concerned about releasing criminal illegal aliens back into society, Sen. Jeff Stone, R- Temecula, asked repeatedly for assurances that the bill would not allow this. “When we have dangerous felons, undocumented fellons, in prison, should they NOT be deported and prosecuted under the law?” Stone asked de León. Stone said he was concerned they will be released back into communities and cause heinous crimes, similar to what happened to Kate Steinle, who was murdered by a five-time deported criminal illegal alien.

Stone said the bill was making California a Sanctuary State, if passed in its virgin form. Stone tried to get de León to agree to an amendment regarding criminal illegal aliens, but de León resisted.

Stone questioned de León again, asking if he would “be supportive of any amendment to allow local law enforcement to pick up dangerous criminal immigrants.”

“It’s not necessary,” de León said. “There is nothing stopping ICE from getting the individual.”

“What is particularly alarming is a very false dichotomy, fueled by hyperbole and rhetoric,” said Committee Chairwoman Sen. Nancy Skinner, D-Berkeley. “All of us wand hardened criminals prosecuted under the law. We are watching now a pitting of the people against each other – of immigrants. That is not right.” Skinner talked again, for the third or fourth time in two days about “easily manipulatable fear,” and said “the state of California will not be compliant with authoritarian policies.”

Cynthia Buiza of the California Immigrant Policy Center, a witness at the hearing in support of SB 54, launched into an out-of-order editorial, calling Trump’s order “anti-immigrant, zenophobic and propaganda,” explains more from her organization’s website: “The California Values Act answers the ugly slurs of xenophobia with a simple but profound truth: all people are created equal. Against Trump and other forces who seek to demonize and persecute immigrants, the Golden State must embrace and defend our common humanity and deepest values.  Getting law enforcement out of painful deportations, protecting the integrity of public spaces, and rejecting any registry which target Muslims will send a potent message to the nation – and the world.”

SB-54 would, among other things, prohibit state and local law enforcement agencies and school police and security departments from using resources to investigate, detain, detect, report, or arrest persons for immigration enforcement purposes, or to investigate, enforce, or assist in the investigation or enforcement of any federal program requiring registration of individuals on the basis of race, gender, sexual orientation, religion, or national or ethnic origin, as specified. The bill would require state agencies to review their confidentiality policies and identify any changes necessary to ensure that information collected from individuals is limited to that necessary to perform agency duties and is not used or disclosed for any other purpose, as specified. The bill would require public schools, hospitals, and courthouses to establish and make public policies that limit immigration enforcement on their premises and would require the Attorney General, in consultation with appropriate stakeholders, to publish model policies for use by those entities for those purposes.