In an astonishing violation of the First Amendment of the United States Constitution, California State Sen. Janet Nguyen (R-Garden Grove), was forcibly removed from the Senate last Thursday morning for challenging the sycophantic Senate memorial of the late Sen. Tom Hayden, a Democrat with a well-known and lengthy history of communist sympathies. Sen. Nguyen and her family escaped communist Vietnam and came to the United States in search of freedom in 1981 during Ronald Reagan’s presidency. Sadly, what Nguyen experienced last week was communistic suppression of dissent inside the chambers of the California State Senate, in the state she thought epitomized freedom. 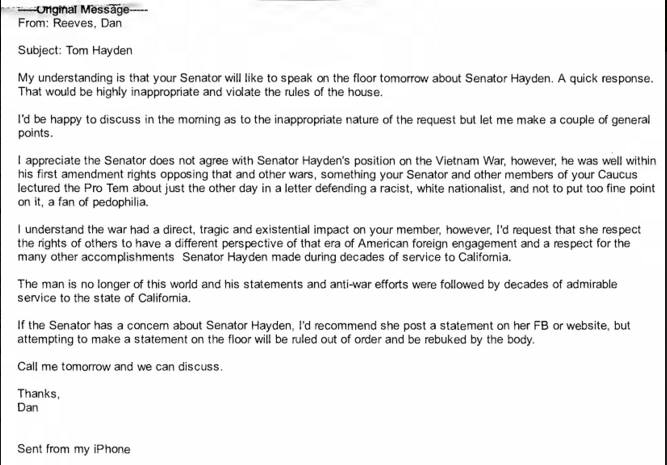 Two days earlier, the state Senate held a ceremony to memorialize the late Sen. Hayden. Nguyen notified Senate leaders she planned to make a statement on what Hayden’s pro-Viet Cong stance meant to the Vietnamese people, how it affected Nguyen, her family and other Vietnamese refugees.

Sen. Nguyen and her staff received an email from Dan Reeves, Chief of Staff to Sen. Pres. pro Tem Kevin de Leon, stating her request was “inappropriate,” and she should “respect the rights of others to have a different perspective of that era of American foreign engagement, and a respect for the many other accomplishments Senator Hayden made during many decades of service to California.”

Undeterred, when Nguyen began to speak in the Senate Thursday, she was told she was out of order by Sen. Bill Monning (D-Carmel), who was waving a Senate rule book in the air. The presiding officer, Sen. Ricardo Lara (D-Bell Gardens), ordered her microphone cut off and repeatedly told sergeants to remove her from the Senate floor.

Who Died and Made Dan Reeves King of the Senate?

The email from Dan Reeves to Senator Nguyen really is an alarming correspondence, and an evidentiary smoking gun. Setting aside Nguyen’s First Amendment right to free speech, or even Senate decorum, this is a matter of a Senate staffer dictating terms of behavior to an elected member of the State Legislature. Additionally, and as importantly, as his email makes clear, Dan Reeves was challenging Nguyen based on the content of what he presumed she was going to say, and on what Nguyen was purportedly thinking.

Inquiring minds want to know exactly how did Senate Chief of Staff Dan Reeves become empowered to do all this?

When I spoke with Sen. Nguyen Thursday, and she told me what the letter said, I was astounded at Reeves’ narcissistic arrogance and overreach as a staffer, but no doubt with approval from Senate Pres. pro Tem Kevin de Leon.

Hypocrisy Abounds in the Senate

Very recently, a young Senate fellow employed by the Republicans, was fired for making a rude gesture in the Senate chambers while the Senate was in session. Senate fellows are typically right out of college, and have very little on-the-job experience. As a 20-year Human Resources Director of 250 employees, this behavior is not only common, it is correctable. My understanding is that the young Republican Senate Fellow was brought before de Leon’s Senate Secretary Danny Alvarez, where the fellow confessed to making the gross, rude gesture, but Alvarez fired him on the spot.

I am curious if after seeing the contemptible email, Secretary of the Senate Danny Alvarez has asked for the resignation of Dan Reeves.

The undisguised double-standard is heinous. 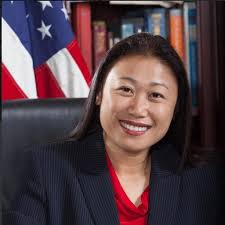 Defending their decision to shut down Sen. Nguyen’s speech, Democrats said that Nguyen inappropriately tried to use a “point of personal privilege” to close the session, and that she had been offered the chance to speak at a different time. Nguyen in fact offered an “Adjournment in Memory” for the “hundreds of thousands of Vietnamese refugees who died in seeking for freedom and democracy.” There was no rule violation. Senators do this all of the time. This was a cruel display of Senators bullying a diminutive female Vietnamese immigrant. The only other immigrant in the Senate is Sen. John Moorlach (R-Costa Mesa), who is from the Netherlands, who stands about 6’3″ and is a white male. Sen. Lara,  an openly gay activist, and the author of anti-bullying legislation, later defended his actions and said he was following instructions from the Senate parliamentarian.  “I fully respect her ability to speak her mind,” Lara reportedly said in an interview after the incident, and said he apologized to Nguyen. Lara’s statement and apology ring hollow given his history of inflammatory public statements and reprehensible treatment of those he disagrees with. From bullying private citizens who speak in committee hearings, to  Senate colleagues and staffers, Lara is a notorious intolerant bully. Lara has used legislation and the law to bludgeon anyone he disagrees with.
A classic example of Lara’s bullying was his 2013 “landmark legislation,” SB 323, to deny tax-exempt status in California to any nonprofit youth organization that “discriminates” against homosexuals or transgenders – and more specifically, targeting the Boy Scouts. This ominous piece of legislation demonstrated that Lara was unafraid to use the tax code to punish anyone who disagrees with his agenda. Fortunately, SB 323 died from a lack of support of his colleagues.Lara also recently threatened on the Senate floor to “fight in the streets” anyone who tried to “dissolve the work we have done” on any of the legislation benefitting illegal aliens in California.Last year, Sen. Lara authored SB 1146, which threatened to eliminate the religious liberty of all California faith-based universities unless they complied with special LGBT laws. Lara’s bill required religious colleges and universities that receive state financial assistance or that enroll students who receive CalGrants, to comply with the anti-discrimination laws that apply to state-related programs, despite the affront to faith-based education. Lara claims religious universities practice discrimination against LGBTQ.What Rule?Following Sen. Bill Monning waving the Senate Rule book at Nguyen, and insisting she was out of order, Sen. Mike Morrell (R-Rancho Cucamonga), asked incredulously what rule she broke. Despite all of the news stories of the incident, there is no apparent rule violation. “Their continued attempts to mischaracterize this incident as a result of a lack of understanding of the rules is a quick jump to judgment and wrong,” Nguyen said in a press statement. “I hope that never again, a sitting senator will go through the trauma of being forcibly removed from the Senate floor.” 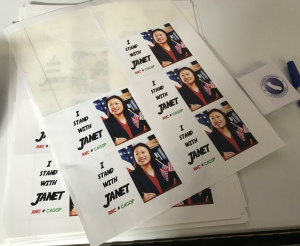 But there are plenty of rule violations by Democrats. Less than four weeks after California voters passed  Proposition 54, the Public Display of Legislative Bills 72 hours Prior to Vote, ballot initiative, Democrat lawmakers rammed through two resolutions hours after turning them in.

The overreaching, ridiculous behavior by Senate Democrats last week led to Sen. Janet Nguyen becoming a hero over the weekend to Republican convention-goers at the California GOP Convention. On Saturday, stickers saying “I stand with Janet” were being worn by thousands at the convention.