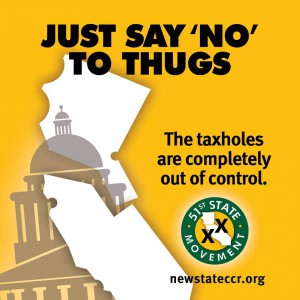 Democrats need to rest and drink plenty of fluids because they have a serious case of “I Hate Trump” Fever. According to the Mayo Clinic, a fever is a sign of illness. However, if the fever is accompanied by a severe headache, stiff neck, and shortness of breath, a doctor should begin treatment. The Democrat-controlled California Senate exhibited all of these signs Monday while debating why California should become a sanctuary state to offer protections for criminal illegal aliens from local law enforcement.

“This is about making our communities safer, not less safe,” said de León. “Especially in immigrant communities, folks will no longer call their local police departments.”

Despite amendments, de León’s bill is parsing words – especially those words which apply to criminal illegal aliens. SB 54 still does not address all criminal illegal aliens, whether they are “violent” or “serious” criminals. Apparently, de León is resisting including human traffickers, child abusers, kidnappers, and hostage takers in his bill. De León instead continues to falsely claim it’s “maids, laborers, baby sitters and landscapers” who are being targeted in ICE sweeps… Except that ICE does not do sweeps – ICE agents work in jails targeting only criminal illegal aliens. De León’s bill would force immigration officials to reinstitute sweeps sine they would no longer be allowed in jails and prisons, where the criminals are located.

Despite the wave of refugees allowed in the United States from Syria and Iraq under the Obama administration, California Democrats continue to deny national security issues in favor of political opportunism.

California is home to the largest illegal alien population in the country, with 35 sanctuary cities, which have sanctuary policies that prohibit police from cooperating with immigration authorities. SB 54 would make the entire state a sanctuary state, harboring criminal illegal aliens.

President Donald Trump has vowed to build a border wall and deport immigrants that have a criminal record, which he estimates to be two-three million.

Showdown at the Capitol Corral

Democrats are headed toward a showdown with the Trump administration over sanctuary policies despite the facts about criminal illegal aliens. “We want to make sure that police officers don’t abandon their beat and go enforce immigration laws,” said Senate President Pro Tem Kevin de Leon in a February Public Safety Committee hearing on SB 54.

Last week, the Department of Homeland Security  released a report identifying cities not cooperating with ICE officials, and had six California cities on the list.

The Department of Homeland Security’s recent Declined Detainer Outcome Report to to expose cities and counties that do not cooperate with U.S. Immigration and Customs Enforcement detainers or requests for notification, is required by President Donald Trump’s Executive Order, “Enhancing Public Safety in the Interior of the United States,” signed on January 25. The report is intended to provide the public with information regarding criminal actions committed by illegal aliens and any jurisdiction that ignores or otherwise failed to honor any detainers or requests for notification with respect to such aliens, according to the DHS.

SB 54 would require all city and county law enforcement departments to follow the type of sanctuary policies that California’s most liberal cities embrace, which is to largely ignore federal laws.

“The tough talk is all rhetoric coming out of Washington,” de León said. “We are going to be punished or they will strike back at us? We are the great state of California. We don’t grovel or put our hand out so we can get a little budget money so we can buy a police car.”

“Don’t get caught up with ‘I hate Trump’ fever,” said Sen. Joel Anderson (R-Alpine). “SB54 is the wrong direction.” Sen. Anderson collected 41,000 petitions signed by “ordinary Californians,” opponents of SB 54, but de León would not allow either a photo of the thousands of petitions, or the 10 boxes of petitions inside the Senate Monday. 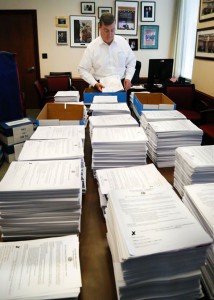 Last week, California Supreme Court Chief Justice Tani Cantil-Sakauye strangely told immigration officials to stop “stalking undocumented immigrants” at the state’s county courthouses, saying it would have “a chilling effect” on (criminal) illegal aliens. “Enforcement policies that include stalking courthouses and arresting undocumented immigrants, the vast majority of whom pose no risk to public safety, are neither safe nor fair,” Cantil-Sakauye wrote in a letter to U.S. Attorney General Jeff Sessions and Homeland Security Secretary John Kelly. “They not only compromise our core value of fairness but they undermine the judiciary’s ability to provide equal access to justice.”And I worry that crimes will go unreported and communities will live in fear.”

Attorney General Jeff Sessions and Homeland Security Secretary John Kelly responded to Cantil-Sakauye in a letter of their own, saying her “characterization of federal immigration enforcement officers is troubling.”

“Such policies threaten public safety, rather than enhance it,” Kelly and Sessions replied. They said under her demands ICE officers would have to make unnecessarily dangerous arrests in public places.  The explained that courthouse arrests have become necessary because of “sanctuary” policies that prohibit local cooperation with federal immigration enforcement. And because courthouse visitors are screened by security personnel, “the safety risks for the arresting officers and persons being arrested are substantially decreased.”

‘Not So Fast’ Say Local Sheriffs

“SB 54 would severely restrict the ability of California’s public safety agencies to interact with the federal government to protect the public. SB 54 is not needed. It would lead to dangerous individuals falling through the cracks and being let out on the streets when they should have been deported instead,” said Sen. Patricia Bates (R-Laguna Niguel) in a statement immediately following the vote.

“Local sheriffs such as Orange County’s Sandra Hutchens have made the compelling case that SB 54 would have a major impact on county budgets. At least four counties, including Orange, have lease agreements with the federal government for jail bed space. Orange County alone would lose $22 million in the first year if SB 54 becomes law. These counties may have little choice but to lay off sheriff’s deputies, which would endanger citizens and immigrants alike.”

Despite a University of California, Berkeley study of more than 1,000 Californians, which found 74 percent oppose sanctuary city policies, legislative Democrats continue to push SB 54, despite that the UC Berkeley study results included 73 percent of Democrats and 65 percent of Hispanics. (De León said he was not familiar with the Berkeley study, but had one of his own that showed widespread support for his bill).

President Donald Trump said in February he is prepared to withhold federal funding from California if it votes to become a sanctuary state, in a Fox News interview. “If we have to, we’ll defund,” he said. “We give tremendous amounts of money to California.”