Democrats Are the Reason For CA’s Crumbling Roads

Republican lawmakers, it’s your moment to prove your worth to your constituents. Especially since Gov. Jerry Brown told a legislative committee Monday his $52.4 billion gas tax increase needs to be approved immediately – especially because they have “a governor willing to sign it.” 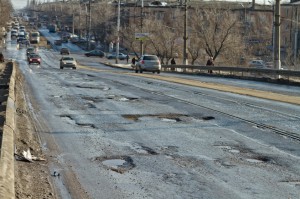 “All the guys running for governor, all want to be president, so they’re not going to want to raise taxes,” Brown said. “You got a guy who’s going nowhere. I have no future. I only have a past.” Another bizarre statement from Jerry Brown…

The latest bill to dramatically increase California gasoline taxes and car registration fees an estimated $52.4 billion over the next decade should be a career-ending crossroad for Democrat Gov. Jerry Brown, who as a gubernatorial candidate promised that he would not raise taxes without a public vote. Ahem.

That’s just Lie #1. There are so many other lies emanating from Brown’s lips.

The Senate does a better job, but there are so few Republicans left in that house. And some Senators are led up the garden path by self-interested staff, opting for personal safety instead of fundamental truths of Republican principles.

I hear from ardent Republicans and Conservatives around the state that they want legislative Republicans to be vocal – even as, and especially as a minority party. They want to see passion, fight and well-coordinated offensives. They want to know Republicans actually care about their issues, and sincerely represent them, rather than fundraising to protect their seats, currying favors from Democrats, or making new friends in the Democrat Caucuses.

Not Another Gas Tax!

Yet Gov. Brown and the Supermajority leaders act as if this is a newly presented problem they just stumbled on. They claim to be shocked and saddened at the horrifying condition of our highways, roads and infrastructure.

Brown and Democrat lawmakers’  gas tax-increase justification is their claim that “This winter’s rains caused $700 million in damage to roads, culverts and bridges, officials said last week,” the state’s complicit news media happily repeats. It’s likely the highways and roads would not have experienced such damage (if true) if they were maintained and in better shape.

Californians already pay billions in taxes every year to fund these repairs. The state already has the money to fix highways and roads. But Governor Brown, Senate Pres. pro Tem Kevin de Leon, and Assembly Speaker Anthony Rendon – all Democrats – instead announced they would rather raise new taxes decreasing the paychecks of California’s working poor, middle class, small businesses, and hard working families.

Californians already pay some of the highest fuel taxes in the nation.  Our gas taxes already include a nearly 28-cent-a-gallon excise tax designated for public roads and mass transit.

There is nothing in SB 1 by Sen. Jim Beall (D-Campbell) to guarantee the $52.4 billion will actually go to roads. But we can be sure that gas will go up 12 cents a gallon, diesel 20 cents a gallon, electric car owners will pay an annual fee of $100, and increase the registration for all vehicles by $38 – $175. In fact, “30% of the new tax revenues will go to projects other than roads (including parks, workforce apprenticeships, rural bike lanes, boats, trains and local planning grants) and that the plan mandates that less than 5% of funds can go to traffic relief or lane expansion,” Jon Fleischman reported in Breitbart Wednesday.

Caltrans is overstaffed by 3,500 employees, at a cost of $500 million per year. Caltrans also has 20,000 employees and a more than an $11 Billion annual budget. Where is the money going? Why are our roads in such deplorable condition?

Not enough taxes are not the reason for California’s poor roads; Democrats are the reason.

This is a Democratic-controlled Legislature gone wild, drunk with power and with the impulse control of toddlers. They have demonstrated that they are incapable of leading justly, and instead have chosen to enrich themselves and reward their union masters at the expense of a great state.

This is an opinion column.