Democrats just passed the largest gas tax increase in California history. The deal is so bad they needed $1 Billion in payola to buy enough votes to pass it. And shamefully, only 60 percent of the gas tax collected from SB 1, authored by Democrat Senator Jim Beall (D-San Jose), will actually be used for road maintenance and repairs. Environmentalists got plenty of taxpayer-funded payola as well including money for more public transit, and for walking and bicycling projects.

SB 1 does nothing to relieve traffic congestion or expand highway lane capacity. If Democrats and Gov. Jerry Brown are trying to force California’s middle class out and small businesses, then it’s working.

During a rally Wednesday on the Capitol steps, Gov. Jerry Brown strangely claimed, “This is a fee, a fee for the privilege of driving on our roads that the people pay for, and we’ve got to keep paying for them. Otherwise, they are not going to work for us. It’s just that simple.”

“Tax increases don’t solve the problem,” David Crane wrote in 2015. “In 2012 California voters passed a temporary tax increase known as Proposition 30 designed to generate an additional $50 billion in revenue over seven years. But as the math makes clear, all that revenue, and more, is being consumed by increases in retirement, health care and corrections spending.” 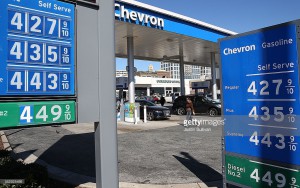 There were alternatives to raising taxes. AB 96 introduced by numerous Assembly Republicans, would use existing funding, “including revenues attributable to the sales and use tax on motor vehicles, revenues attributable to automobile and motor vehicle insurance policies from the insurer gross premiums tax, revenues from certain diesel fuel sales and use taxes, revenues from certain vehicle registration fees, and certain miscellaneous State Highway Account revenues,” the bill language says. AB 96 would also require 40 percent of the revenues to be allocated to the Department of Transportation for maintenance of the state highway system or for purposes of the State Highway Operation and Protection Program, 40 percent of the revenues to be apportioned by the Controller to cities and counties for road purposes pursuant to a specified formula, and 20 percent to fund projects in the State Transportation Improvement Program that create measurable reductions in traffic congestion. The bill would require the California Transportation Commission to adopt performance criteria and metrics for expenditure of certain of these revenues, and would impose various requirements on cities and counties in order to receive apportionments.”

SB 1 is just a scam perpetrated on California taxpayers.

Here’s the detail of what this tax increase will cost you:

Republican Senator Anthony Cannella sold his soul to the devil with the gas tax vote Thursday, in exchange for $500 million going to his district, and whatever promises made to him personally from Gov. Jerry Brown. Cannella, demonstrating how tone deaf he is, posted on Twitter Thursday, “I think I’m going to stay off social media today.”

This betrayal of low-income families, the working poor, middle class and small businesses throughout the state, shows once again just how indifferent so many in the Legislature are to the real world.

Senator Cannella’s public deal “was successful in securing $400 million in funding for a commuter rail line that will connect his district to job centers, and a $100 million investment in an expressway connecting commercial and industrial areas through an integral part of Merced,” his press statement said.

All republicans stuck together on one of the highest tax increases in State of California’s history… EXCEPT State Senator Anthony Cannella.

Why? He was reportedly promised a $500 million dollar train in his district to connect to the Bay Area BART system.

What does he do in addition to being a State Senator?

Of course, the train system will need to be designed before built by some firm.

“SB 1 represents the largest gas tax increase in California history, at a time when small businesses and working families are painfully struggling to make ends meet,” said Tom Scott, NFIB California State Executive Director. “This tax hits middle-class and lower-income families hardest, while California has the highest poverty rate in the nation. Although we agree there is a dire need to invest in our roads and infrastructure, in a recent survey, 90% of NFIB members said they oppose raising new taxes to do this. Over the last six years, Sacramento has received $36 billion in new tax revenues, but not a single new dollar has been invested in our roads. Governor Brown and Democratic legislative leadership need to fix their budget priorities in order to fix our roads.” 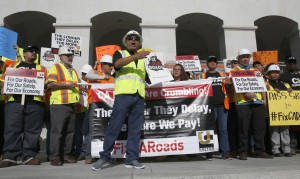 Who This Tax Increase Will Hurt

“A low-wage worker today earns less than a similar worker would a generation ago,” according to the California Budget & Policy Center (formerly the California Budget Project), which says it researches how state policy affects low-and middle-income Californians. “Even as the economy grows, that’s not resulting in an increase of their hourly wages, and so over time the value of their wages has eroded.”

California Budget & Policy Center also says their work “is grounded in the fundamental belief that government should work to improve the lives of the people it serves.”

Accordingly, the CBPC offers these statistics:

Sen. Cannella represents the residents of Fresno, Madera, Merced, Monterey, San Benito and Stanislaus counties, but apparently has little concern for those living in households earning less then $19,000 annually.

Now that the gas tax has been passed, Republicans have a chance to show strength and grit, and push a bill insisting on 1) a forensic accounting of the state’s missing transportation and infrastructure funding, and 2) demand quarterly reports on the new transportation funding going forward. 3) Republicans can and should require an independent accounting firm perform the forensic accounting, as well as prepare the quarterly reports.

Californians should be repulsed by the lawmakers who voted for Senate Bill 1 in exchange for the inevitable cushy high paying appointment on some spurious board or commission, gifted by the Governor and Democrat leadership.

Had SB 1 been a sincere, solid transportation bill that funded road and highway repairs and maintenance without raising taxes (again), we would not have witnessed the deal-making and quid-pro-quo (something for something).

“We also cannot ignore how almost exactly one year ago, the same politics in Sacramento rushed the $15 minimum wage hike through the legislature in one week,” Tom Scott with the NFIB said. “However, the 50 cent per hour pay bump minimum wage workers got with SB 3 last year will instantly be erased by the tax increases in SB 1.” 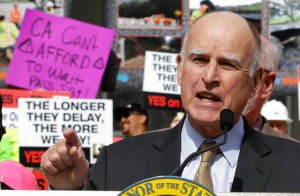 “Senate President Pro Tem Kevin de León (D-Los Angeles), who negotiated the package with Brown and other Senate and Assembly leaders, said the state’s roads have suffered from decades of neglect and must be addressed,” the LA Times reported. “This is a courageous step for many legislators, but you can’t stand on the sidelines and be a naysayer,” De León said. “You can’t say no, no, no, no, no, no to everything.”

The left must destroy California in order to transform her into a socialist state.