Free speech is under assault in America. And in California, free speech is being bushwhacked. People are attacked just for having patriotic bumper stickers on their cars. Trump supporters who attend rallies are threatened, assaulted, beat up, and in a weekend attack in Santa Monica, a 28-year old man was knifed nine times! The only people being attacked are Trump supporters. The media lie “both sides do it” is repugnant; both sides are not violent. 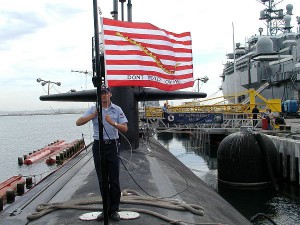 The Navy Jack flag flying from my house was set on fire shortly before the November 8th presidential election. We fly it at the behest of our son, a Naval officer, who was deployed to the Middle East at the time. It’s an historical flag. But the dunderheads who set it afire have no idea that the Navy Jack flag is flown from all commissioned naval vessels. Duh.

In my urban Sacramento neighborhood of 6,000 homes, I counted three Trump signs and one Trump flag being displayed during the election. However, it appeared that every other house had HILLARY signs displayed, and every Prius and Subaru wagon displayed I’m With HER bumper stickers next to COEXIST, BOYCOTT ISRAEL, Proud Witch, and Obama 2008. 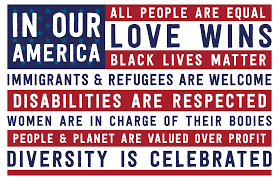 Following the election, that obnoxious, preachy “In Our America” sign popped up all over my neighborhood. The sign is from the “Nasty Women Get Shit Done PDX” group who fancy themselves enlightened feminist resisters. However, they really are just batty deniers, still whining about losing the election, and ignorant of the Electoral College.

Nasty Women Get Shit Done push ridiculous messages like 7 Reasons Why Patriarchy Is Bad (And Feminism Is Good) For Men​, and 4 ways you as a white person can reduce your complicity in white supremacy.

This is life in urban California. It’s hostile, full of angry liberals still in shock that Hillary lost, who see no problem destroying property if it supports their anti-Trump “resist” game plan.

Yet media elites, talking heads and Democrat strategists continue to tell us that “both sides do it.”

Au contraire mon frère. Both sides do not do it. It is this attitude that propelled Trump to win the presidential election. I understood Trump’s populist appeal early on, and embraced it along with middle and rural America, because after the last eight years, and the lily-livered Republican choices for President, the people wanted a fighter because the people are fed up. The people are fed up with the lying media. They are fed up with Democrat and Republican operatives, and with the political establishment, which has gotten rich while ignoring the will of the people.

This election was simple: Trump spoke directly to the people whose concerns were jobs, immigration, and Islamic terrorism. The agenda of the previous eight years ignored these basic issues. This election, Democrats had no playbook and no solutions to these bipartisan problems.

When George W. Bush was running against Al Gore in the 2000 election, there were a good amount of Bush/Cheney lawn signs in my neighborhood — not as many as the Gore/Lieberman signs, but people in my urban neighborhood didn’t hesitate to show support for either political side.

However, that didn’t last. In 2000, I was berated at my local polling station by a few boorish, loudmouthed neighbors for being Republican, thanks to the poll worker who loudly announced (sneered) my Republican Party status. I had my then-11-year old son with me, and that may have been the first time he showed his protective side for mom. He was disgusted at their behavior, and demanded to know why the incident happened. Needless to say, we had an interesting discussion about it.

Today it’s even worse. The liberal left is no longer liberal; they aren’t progressive, they aren’t enlightened, and they are not tolerant – once terms used to describe liberals. They are corrupted, radicalized and make daily use of “the ends justify the means.” They have become incendiary domestic subversive malcontents, only happy when anyone right-of-center is cowed into silence. Ordinary decency is dead on the left. And those who deny this look the other way when it is in front of them.

The Democrat Party is Destroying America

The Democrat Party has adopted many communist intentions to destabilize and destroy America, from cultural rot, to demonizing prayer and religion, to socializing and destroying public education, to open contempt for the rule of law.

Following Trump’s victory, Democrats and the media should have done a serious introspection, because his win was not a surprise; they just refused to see the signs, and instead ramped up manipulations to get Hillary into the White House. They ignored the obvious. And if they are incapable of reading the obvious signs in an election, imagine how bad Democrats in the White House again would be.

Camille Paglia, the feminist liberal media studies college professor says the Democrat Party has destroyed American journalism, and won’t stop there. “Democrats are doing this in collusion with the media obviously, because they just want to create chaos,” she said. “They want to completely obliterate any sense that the Trump administration is making any progress on anything.”

I’ve long said that Democrats always overreach when they are in power. Paglia agrees. Her assessment of media bias in the Trump era leaves little room for optimism. “I am appalled at the behavior of the media,” she declared. “It’s the collapse of journalism.”

Paglia, who voted for Jill Stein last November, is predicting Trump will win re-election in 2020. “I feel like the Democrats have overplayed their hand,” she said.

If the elitist media leftists (Democrats with bylines) continue to write articles demanding Trump’s trial and execution – if leftist college professors continue to call for Trump to be hanged, or fantasize about Trump’s murder – they can expect an uprising from the hard working, decent people on the right who are disgusted and fed up with their abhorrent behavior.

And if elitist Democrats and the radical left continue to insult Middle Americans, the Middle Class, the working classes and those who want to work, they will be in for an even bigger surprise. While leftists are so wrapped up in their collective angry meltdowns and adult temper tantrums, Trump is working hard to overturn job and business killing regulations, and get Americans back to work. “Drunk with words, spin, and snark, middle-class journalists can’t be bothered to notice the complex physical constructions that make modern civilization possible,” Camille Paglia said. “The laborers who build and maintain these marvels are recognized only if they can be shoehorned into victim status. But if they dare to think for themselves and vote differently from their liberal overlords, they are branded as rubes and pariahs.”

Meanwhile good Americans need to stand up, speak out, and fight back. All need to remember Thomas Jefferson’s words: “I have sworn on the altar of God eternal enmity against every form of tyranny over the mind of man.” Nothing will change until you do.