Once upon a time, Republican elected officials from California led our nation with conservative first principles. 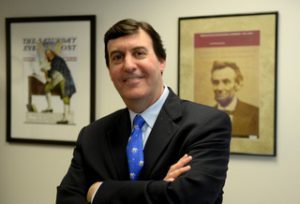 The Golden State’s first U.S. Senator, John C. Fremont, was “Lincoln’s Pathfinder” as the first presidential candidate of the new Republican party, in 1856.

Ronald Reagan was California’s 33rd Governor, and the successful two-term 40th President of the United States.

Proposition 13 and the anti-tax movement were important and longstanding efforts to protect homeowners from the voracious appetites and confiscatory taxation ambitions of local and state governments.

Today, California Republicans are at a low ebb. Voter registration statewide has the GOP, at less than 25%, now in 3rd place, behind both registered Democrats and Independents.

The “top two” voting system means that GOP candidates don’t even appear on the general election ballot for U.S. Senator or Governor anymore.

The last time a Republican won a U.S. Senate seat in California was in 1988 (Pete Wilson). All current statewide elected constitutional officers are Democrats, and the state legislature in Sacramento is now 2/3rd Democrat, a super-majority.

The one-party Golden State is in crisis:
— ranks near the bottom, year after year, in 4th and 8th grade math and reading scores, and in high school literacy and graduation rates
— faces increasing crime rates, due to the debacles of a U.S. Supreme Court rejection of the state prison system, and Gov. Brown-and-voter- approved early release of criminals
— violates federal law via “sanctuary cities” for illegal immigrants
— fails to build dams, and creates man-made drought due to environmental extremism
— suffers desperately high rates of Inland unemployment & poverty, including in the rural “north state”, where regulatory assaults on the local mining, timber, fishing, and agricultural industries & water rights result in social maladies such as spousal & child abuse
— leads the nation in welfare, with fully 1/3rd of the nation’s welfare cases
— pays out billions of dollars a year in union-secured salaries and benefits and obscenely high pension liabilities to public employees — funds therefore unavailable for education or road repairs or prisons or children health programs.

The U.S. congressional delegation from California now numbers merely 14 Republicans out of 53 representatives: LaMalfa, McClintock, Cook, Denham, Valadao, Nunes, McCarthy, Knight, Royce, Calvert, Rohrabacher, Issa, Hunter, and Walters. These Members of Congress often come from the grassroots of the Republican party, assert their respect for the legacy of Ronald Reagan, and have achieved important accomplishments as Committee Chairs in the areas of national security, intelligence, and natural resources, et al.

They are about to face their biggest test to remain resolute and focused on their constituents, to serve the party of Reagan, and to stand by the hardworking taxpayers of California, by saving us from the swamp that is Washington, D.C.

The GOP Congressional Majority, via the tax-writing House Ways & Means Committee, and the Trump administration, are finalizing a long process of legislative sausage-making: tax cuts, tax reform, & tax simplification are the stated goals.

Many agree in theory with the idea of cutting the federal corporate tax rate, from 35% to 20% or even 15%. The United States is uncompetitive with Canada, and European and Asian nations, and trillions of dollars are trapped overseas as American companies don’t repatriate these profits.

Unfortunately, instead of cutting record levels of Federal government spending, Congress wants to off-set any federal revenue reductions with the usual gambit: taking ever more money from the middle class to pay for corporate tax relief.

After the failure to reduce taxes via a repeal and replacement of ObamaCare, GOP tax writers are now looking for more revenue.

In response, lobbyists seek to maintain all or most of the federal tax charitable contribution deduction, and the tax benefits associated with annual individual IRA and 401k retirement savings contributions and 1031 Real Estate Exchanges.

And, citizens in expensive real estate areas are championed (by mostly Democrats, so far) seeking to keep the $1 Million cap on the mortgage interest deduction. Slashing this down to $500,000, as proposed, would penalize the home ownership dreams of millions of Californians.

But there is one major tax deduction which seems yet to have a public GOP champion: the deduction from federal taxes of state and local taxes paid, which reduces adjusted gross income by about 8% per taxpayer itemizing on his/her federal tax return.

This deduction has existed since the U.S. began formally collecting income taxes in 1913, and the Tax Policy Center estimates $1.3 Trillion over 10 years would be sent to D.C. by eliminating the state and local tax deduction.

The non-partisan Tax Foundation estimated the federal deduction of state and local taxes at over $100 Billion, in 2014, in California, about 1/5th of the total value nationwide. New York was second at $68 Billion.

So, astonishingly, leaders of the national GOP are proposing to cut taxes, bigly, on Google, for example, which fires young workers who dare to express a politically incorrect point of view, but dramatically to raise taxes on families who have been voting GOP for decades?

Liberal Governor Andrew Cuomo (D-NY) opposes this effort, as does Rep. Mike Thompson (D-St. Helena), but not a word from Majority Leader Kevin McCarthy (R-Bakersfield)? Does he really want further to build the wealth and political power & war chests of left-wing high-tech corporate Democrats in Silicon Valley, while hammering middle class taxpayers from the Oregon border to San Diego, and in the Bay Area, L.A., the OC, and everywhere in between?

California is a net donor state. Unlike Mississippi, for example, far more money flows from California taxpayers to Washington, D.C. than comes back to the Golden State. The argument that the deductibility of state and local taxes is a subsidy to blue state taxpayers is therefore wrong.

The simple question is: Do our Republican representatives want money to remain in the hands of their very highly taxed constituents, to grow companies, hire workers, build families, spend in the economy, and reward & incentivize sacrifice, or do they want ever more money to flow to D.C. where it is over-spent on every bureaucratic boondoggle and protects the political power of incumbents?

Show us (who keeps) the money, Congressmen! Citizens or the bloated federal government?

Taxing Californians, the highest taxed citizens in the country, ever more, by eliminating the deductibility of state and local taxes, will be the final blow, resulting in the final exodus of Republicans via the I-15 to Nevada and other states which do not even assess state income taxes.

The GOP in Congress may finish off Republicans in California, tipping the most populace state into 3rd World status, and destroying the American dream for hardworking taxpayers.

That likely means no more voters for GOP Congressmen too. California Democrats must be gleeful.

Larry Greenfield is a wealth advisor in Los Angeles, previously associated with the Claremont Institute, the Reagan Legacy Foundation, and the CA Republican Jewish Coalition. He earned his BA at UC Berkeley, his JD at Georgetown, and served in U.S. Naval Reserves in San Diego. He is a past member of the executive committee of the California Republican Party.