In Part l, it was revealed that Gerald (Jerry) Meral, and Joseph Caves (Tom Steyer’s Proposition 65 money man) both submitted proposition language for water bond ballot initiatives a couple of weeks apart, in July 2017. The two initiatives are remarkably similar — even have the same wording in numerous places — and suggest coordination to ensure passage of one or the other. Meral’s ballot initiative would raise $8.4 billion, while Cave’s is for $8 billion, according to the state’s Office of the Legislative Analyst. The LAO offers modest fiscal analysis but did acknowledge it will take $17.3 billion to pay off principal ($8.9 billion) and interest ($8.4 billion) on bonds over a 40-year period. 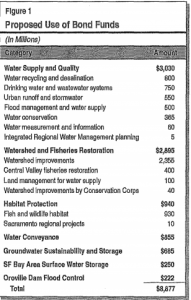 AB 18 was a more “modest” $3.1 billion bond measure, and SB 5 passed the California legislature at $3.5 billion in new general-obligation bonds. Like the Meral and Caves citizen initiative proposals, both shared supporters, sponsors and had some language in common, suggesting more coordination.

All four measures broadly benefit a common group of non-profit and quasi-governmental green conservation organizations. But why are these powerful groups coordinating to provide the huge sums of money that flow through Cave’s proposed bond to various state and regional conservancies created by or influenced by Resources Legacy Fund, Resources Legacy Foundation and Resources Law Group, other than cronyism? Who are these groups, who do they represent, what services do they provide to the public that warrants hundreds of millions of taxpayer money and expensive bond debt doled out from the public purse?

The non-profit groups and lobbyists behind Meral’s, Caves’, Garcia’s and De Leon’s ballot initiatives have been feeding for years at the government money trough, doing little or nothing to actually help improve California’s deteriorating state parks or the state’s water storage or delivery issues, while trails and facilities declined in the California State Park System and the water deficit in California only grew worse.

This is explained in an article by Inside Philanthropy:

“Handling millions of dollars and tracking hundreds of projects can be hard work — and sometimes the big foundations need a little help. That’s where groups like the Resources Legacy Fund (RLF) come in, helping donors to set goals, develop strategies, and execute initiatives. Some of the largest foundations in the conservation field have relied on RLF for help. These groups include the Packard Foundation, the Gordon and Betty Moore Foundation, and the Hewlett Foundation.”

“The Packard Foundation acknowledges RLF as a ‘longtime partner’ and relies heavily on the organization for its grantmaking.”

There are several aspects to the Joseph Caves and Resource Legacy Fund story.

Joseph Caves is the dominant lobbyist and strategist for the environmental community, co-founder of the Conservation Strategy Group, which claims to be “Advancing AB 32 goals through natural resources, clean energy, and clean transportation policy.” Caves also served in the Legislature as a committee consultant and legislative director for more than a decade.

Caves ran Tom Steyer’s Proposition 39 campaign in 2012. “Prop. 39 would require businesses headquartered out of the state to use the ‘single sales factor method,’ in which their tax liability is based solely on their amount of sales in the state,” I reported in 2012. Prop. 39 passed and was expected to generate $1.1 billion a year. But it also required that half of the Prop. 39 money raised fund green energy saving projects in California’s public schools.

Of the $33,280,000 that Tom Steyer gave to the Proposition 39 proponents committee in 2012 to gain passage, Cave’s Conservation Strategy Group received $461,114 and Capitol Webworks $450,000, according to the committee’s FPPC filings for that election cycle. Steyer’s contribuitons included $5,500,000 to two other pro-Proposition 39-related committees related to Joseph Caves and Creative Strategy Group.

Steyer had his own interests in mind; he is the co-chairman of the Clean Energy Job Creation Fund, and is heavily invested in clean-tech businesses. Many said Steyer stood to benefit financially from some of the $1 billion of additional tax money.

However, as the Associated Press reported in 2015, only a fraction of the promised green jobs have been created following passage of Prop. 39. And the initiative is bringing in millions less each year than initially projected, according to the AP.

The AP report also found that the state has never produced anything showing much work has actually been done or if any energy has been saved.

So what is the stated purpose of Cave’s new proposition? The Attorney General of California wrote the following title and summary of the chief purpose and points of the proposed measure:

Whatever it’s real purpose, a fundamental question that needs answers is why powerful groups are coordinating to provide the huge sums of money that flow through Cave’s proposed bond to various state and regional conservancies created by or influenced by Resources Legacy Fund, Resources Legacy Foundation and Resources Law Group. Who are these groups, who do they represent, what services do they provide to the public that warrants hundreds of millions of taxpayer money and expensive bond debt doled out from the public purse?

Joseph Caves’ cozy relationships, sources of funding, coordination with key governmental figures, major political contributors, and those on both sides of the revolving door of public service deserve a closer look as he and his proposed ballot initiative measure seek to qualify it for the 2018 election. This is crony political horse trading inside and outside of government, but does not benefit the millions of taxpayers who are footing the bill.