“THE MARXIANS LOVE OF DEMOCRATIC INSTITUTIONS WAS A STRATAGEM ONLY, A PIOUS FRAUD FOR THE DECEPTION OF THE MASSES. WITHIN A SOCIALIST COMMUNITYTHERE IS NO ROOM LEFT FOR FREEDOM.”

California Gov. Jerry Brown and the Democrat-supermajority State Legislature hold the state Supreme Court’s purse strings. Evidence of this can be found in the Monday California Supreme Court 7-0 decision in the Gerawan Farming case. 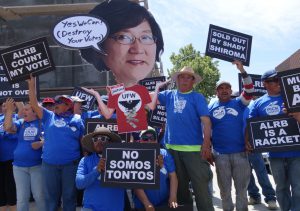 “California Supreme Court rules in favor of UFW in dispute with Gerawan Farming,” screamed one headline. Well, isn’t that special.

The California Supreme Court heard the Gerawan case earlier this fall on whether the state’s attempting to force mandatory agricultural labor union contracts violates the constitutional safeguard of equal protection. Fresno-based peach grower Gerawan Farming is one of the largest agriculture employers in the state.

The State of CA vs. Private Farming Businesses

The latest fight between Gerawan Farming and the UFW/ALRB has been going on since 2012. And it’s only gotten uglier every year that passes.  “Gerawan said the UFW tried to organize his workers 23 years ago,” I wrote in 2013. “After only one bargaining session, the UFW abandoned the workers and the process.

The serious wrangling with the United Farm Workers Labor Union and ALRB began again in October of 2012, when the union insisted that a decades old collective bargaining agreement covering Gerawan workers be reactivated, and tried to invoke a 2002 law that empowers the California Agricultural Labor Relations Board to impose a union contract on the company’s farm workers, and to deduct three percent of the 5,000 Gerawan employees’ pay — without their consent. According to the agreement, if any of the employees were to object to this forced contract that they had no involvement or voice in, Gerawan would be required to fire them — even though there had been no union involvement with the workers for more than 23 years. Some of the workers then began the process for a vote to decertify the union, and forced the decertification election. The ALRB promptly declared “misconduct,” and locked up the ballots.

The CA Supreme Court judges’ concern with the United Farmworkers labor union abandonment was clearly absent from the Court decision Monday. Gerawan lost 7-0 in what was such a leftist-political decision – especially based on the liberal court appointments, and those additional three appointees stacked on by California Gov. Jerry Brown.

Despite the Fifth District Court of Appeals in Fresno unanimously striking down California’s Mandatory Mediation and Conciliation secrecy law as unconstitutional last year, and this important legal win to Gerawan Farming and its employees, the California Supreme Court went in the opposite direction Monday.  The California Supreme Court heard arguments September 5, 2017 to decide whether the state can force an agency-dictated “collective bargaining agreement” on an employer and its employees.

The arguments centered around so-called “Mandatory Mediation and Conciliation” amendments to the Agricultural Labor Relations Act, which the California Court of Appeal ruled violate equal protection principles and unlawfully delegate power to the state’s Agricultural Labor Relations Board allowing the United Farm Workers to impose a contract on Gerawan Farming and its employees.

In May 2015, that court unanimously held that the ALRB’s forced contracting scheme is “the antithesis of equal protection” because it imposes a contract “by administrative edict” based on “a distinct, unequal, individualized set of rules” for each employer.

Remember, this CA Supreme Court decision comes after the Agricultural Labor Relations Board spent $10.8 million to prevent Gerawan Farming Workers’ 2013 decertification election votes from being counted – more than $4,100 per vote to deny farmworkers their legal rights to be heard. The ALRB doubled its budget and staff, and still Gerawan’s employees do not want to be unionized by the UFW or forced into union servitude by the California ALRB.

“The United Farm Workers union has had a powerful grip on California for decades,” said Assemblyman Jim Patterson, R-Fresno. “The unfair laws they’ve put in place make farmworkers powerless in deciding their own fate – stripping them of the same employee rights afforded to every other worker in this state. Today’s decision by the Supreme Court unjustly allows one of these laws to continue.”

The lower Court concluded that Gerawan was permitted to raise the UFW’s abandonment as a defense to this forced contracting scheme, “because only that result will preserve the ALRA’s purpose of protecting the employees’ right to choose.”

Thousands of the Gerawan Farming employees successfully petitioned for the right to hold a decertification election to determine whether or not to oust the UFW. That election was held in 2013. Though the Board has yet to count the ballots, and then even ordered the ballots destroyed, it imposed the MMC contract after the election. Both the UFW and the General Counsel of the Board sought unsuccessfully to compel enforcement of the contract, which would have forced workers to pay dues or fees to the UFW, or be fired.

As if in defiance of the Fifth Circuit Court of Appeals and all legal reason, the CA Supreme Court wrote: “We reject Gerawan’s argument that the MMC process is unconstitutionally arbitrary because it allows a “self-interested union to compel the regulation of individual employers of its choosing.” The statute permits either the union representative or the employer to file a declaration with the Board requesting MMC. (§ 1164, subd. (a).) Even if unions are more likely to demand MMC than employers, the Legislature empowered the Board, not the parties, to assess whether the statutory prerequisites are met before it orders MMC.”

“The purpose of the MMC statute is to promote collective bargaining and ensure stability in the agricultural labor force,” the CA Supreme Court admits. They even admit there is “discretion afforded to the mediator under the MMC statute,” but none to the employer or employee(s).

Instead the CA Supreme Court said, “Arbitrary treatment is of course possible under the MMC statute, just as it is possible with respect to a host of governmental functions that involve discretionary decision making. But in order to succeed on a facial challenge, it is not enough to show that some hypothetical applications of the MMC statute might result in arbitrary or discriminatory treatment. Instead, Gerawan must show that the statute “inevitably pose[s] a present total and fatal conflict” with equalprotection principles (Brown, supra, 29 Cal.3d at p. 181) or, at the least, that the statute violates equal protection “in the generality or great majority of cases.” (San Remo, supra, 27 Cal.4th at p. 673.)”

I frequently point out legislation passed by California’s Legislature which violates the California Constitution, as well as the U.S. Constitution. Nevertheless, the CA Supreme Court found, “The Legislature made the fundamental policy determination that the MMC process was necessary ‘in order to ensure a more effective collective bargaining process between agricultural employers and agricultural employees, and thereby more fully attain the purposes of the [ALRA].’”

Unconstitutional legislation singled out political enemies of the UFW.

Gov. Brown signed a bill into law October 2015 rewriting the definition of labor rules governing piece-rate compensation in California. But, unsurprisingly, the bill extracts a very high price from employers to benefit unions and, unfairly carves-out the two employers that are targets of UFW unionizing efforts.

The Agricultural Labor Relations Board says it exists to protect the rights of all agricultural employees, including those not wanting labor organization representation, as is the case with Gerawan Farming employees. However, Gerawan farming employees say they have never received any assistance from the ALRB, and in fact have been under assault by the ALRB.

It is a violation of the U.S. Constitution to single out members of a group so as to inflict punishment on them without a judicial trial (United States v. Lovett).

Fowler Packing Company and Gerawan Farming are the victims of an injustice done at the behest of the UFW. Both companies have been sued by attorney Mario Martinez — the same attorney who is the General Counsel of the UFW — the union which had undo influence over this legislation.

Assemblyman Jim Patterson, R-Fresno, called AB 1513 a “criminal conspiracy,” and called for a legal remedy: “The only way for justice is if this conspiracy is brought out into the open in a court of law.”

Fowler and Gerawan sued the state, pointing out that AB 1513 was drafted following “closed negotiations” between the United Farmworkers and the Labor and Workforce Development Agency.

A 9th U.S. Circuit Court of Appeals panel sided with the two California farming companies, finding that a portion of a one-year-old law helps the United Farmworkers of America union and hurts the companies, with little regard to the public interest. The 9th Circuit panel declared the carve outs as unconstitutional, and sent it down to a lower court.

Federal District Court Judge Dale Drozd of the Eastern District, an Obama appointee, appears poised to strike down the entire law, and not just the carve outs. This is important because a this is federal judge poised to strike down a state law. The Judge made it very clear that without the carve outs the law would have never made it to a vote, so he’s not comfortable changing a law and thereby creating a law that the legislature would never have considered, based on the court transcripts — that would be legislating from the bench.

This is a bombshell because the agriculture industry, the governor’s office, and the legislature knew the result could be the entire law being thrown out. They gambled that only the carve outs would be affected, but based on what the judge said in court transcripts, it looks like they’re going to lose the entire law.

After winning a contested election in 1990 and being certified by the ALRB in 1992, the UFW disappeared from Gerawan for nearly two decades, and the court acknowledged this. The Court said: “It is clear that the employees’ right to a representative of their own choosing would be seriously jeopardized in the situation of abandonment by a union where, as here, the absentee union suddenly reappeared on the scene to demand the MMC process.”