We All Get Screwed In Capitol Affairs 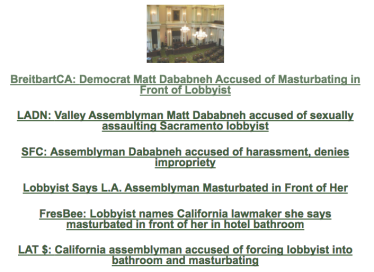 The same leftist culture that created rabid feminism is now condoning victim worship of all females who claim sexual harassment and assault – even before the facts are out. It’s apparent the left is confused, and really doesn’t stand for anything — except for their goal to completely destabilize and destroy traditional America.

Many years ago I remember being told by a veteran old-school police officer that there are no victims; we put ourselves in situations in which we can be victimized. In his world of crime and punishment, so few people he saw “victimized” were blameless – other than children, who are not to blame for what predatory adults do to them.

Inside, in the California State Capitol, where power and corruption go together like bacon and eggs, sex and control are also part of the equation.

As a former Human Resource Director, I frequently reminded my male-dominated workplace population not to dip their pens in the company inkwell, if at all possible. Many workplaces have strict no-fraternizing rules for good reasons. Relationships in the workplace are complicated, emotional, impulsive, hysterical, irrational and inevitably inelegant during rocky times and breakups.

Yet the elected knuckleheads at the State Capitol ignore the best legal and HR advice, as if they are royalty immune from consequences. Men and women in and around the Capitol ignore what should be obvious warning signs, and dip their pens into the Capitol and office inkwells anyway.

For many, the lure of the Capitol culture is sexy, naughty, seductive and provocative. Power is magnetic to the corruptible, and often attracts pathological personalities for whom an extramarital romp, or convention liaison causes no moral dilemma. The recent extramarital affair between California Assembly leaders cost Californians millions of dollars – and not in settlement payouts. We all got screwed in that affair.

“Society is not the criminal but the force which keeps crime in check. When social controls weaken, man’s innate cruelty bursts forth,” said introspective author Camille Paglia. “The rapist is created not by bad social conditioning influences but by a failure of social conditioning. Feminists, seeking to drive power relations out of sex, have set themselves against nature. In western culture, there are no nonexploitative relationships. Everyone has killed in order to live. Nature’s universal law of creation from destruction operates in mind as in matter. As Freud, Nietzsche’s heir, asserts, identity is conflict. Each generation drives its plow over the bones of the dead.”

For the vulnerable naïve young interns, fellows and staffers, when the powerful prey upon them, it’s out of a sense of entitlement. When a Senator picks up a 19-year old intern at the airport, and takes her to his hotel lair, (a task usually done by a staffer), he’s got something on his mind besides politics and policy.

When a male lobbyist pays too much unwanted attention to a lawmaker’s scheduler, it’s out of a sense of entitlement.

And they know it.

Then there are the women and men who say they are cool with the sleeping-their-way-to-the-top game. For them, this behavior also causes no moral dilemmas – not for themselves, or for the people hurt along the way.

But for the young men and women who landed a plum internship, or launched a job from interning, or landed a job right out of college, most have no idea the moral cesspool they are getting into – until it’s too late, or until they make the decision to leave after being pinched, grabbed, propositioned or their job threatened unless certain indiscretions take place.

Tales from the Crypt

Legendary tales of California lawmakers behaving badly vary from ordering staff to clean their pigsty apartments, pick up laundry… kids… groceries… to airport pickups and drop-offs at all hours, dinners, liaisons outside of work, catching a quickie on the desktop in the office, “sharing” dates with other members, going lingerie shopping with staff, and the like. You get the picture. It’s a cesspool.

Since when did elected lawmakers become so despotic and immoral? When they started exempting themselves from the laws they enact.

No Standards or Double Standards?

The same leftists insisting that Republican U.S. Senate candidate Roy Moore be prosecuted for dubious 40-year old sexual assault allegations, are lauding a new gay-love movie, Call Me By Your Name, in which an adult man has a gay sexual relationship with a 17-year old teen.

Mainstream media movie reviewers of “Call Me By Your Name,” say

Pedophilia is acceptable if you are a leftist? Apparently if the left did not have double standards, they’d have no standards at all.

Camille Paglia has studied this and wrote in Sexual Personae: Art and Decadence from Nefertiti to Emily Dickinson:

“Modern liberalism suffers unresolved contradictions. It exalts individualism and freedom and, on its radical wing, condemns social orders as oppressive. On the other hand, it expects governments to provide materially for all, a feat manageable only by an expansion of authority and a swollen bureaucracy. In other words, liberalism defines government as tyrant father but demands it behave as nurturant mother. Feminism has inherited these contradictions.”

“The culture of dignity is now giving way to a new culture of victimhood in which people are encouraged to respond to even the slightest unintentional offense, as in an honor culture,” according to Jonathan Haidt a social psychologist at the NYU-Stern School of Business, and co-developer of Moral Foundations Theory. “But they must not obtain redress on their own; they must appeal for help to powerful others or administrative bodies, to whom they must make the case that they have been victimized.” He uses his research to help people understand and respect the moral motives of people with whom they disagree.

Leaving sex to the feminists is like letting your dog vacation at the taxidermist. ~Camille Paglia

Remember how former Fox News host Megyn Kelly — who openly opposed Presidential candidate Donald Trump — daily pushed the hoax that faker Michelle Fields was assaulted by Corey Lewandowski at a Florida rally when he brushed up against her. Video of the alleged “assault” proved nothing happened, the Gateway Pundit reported. “But that didn’t stop Megyn Kelly and fellow #NeverTrumpers from pushing this hoax for weeks.”

I weep for the liberty of my country when I see at this early day of its successful experiment that corruption has been imputed to many members of the House of Representatives, and the rights of the people have been bartered for promises of office. ~Andrew Jackson