The Ludicrous March of the Ugly Pink-Hatters

The latest women’s march is more proof that these leftists – and they all are leftists – are empty-headed imbeciles. Billed as demonstrations in support of “female empowerment,” this march of ugly, angry leftists doesn’t understand that the rest of us are laughing at them. They are having an annual emotional flare-up, a temper tantrum, but they can’t articulate what they are upset about. 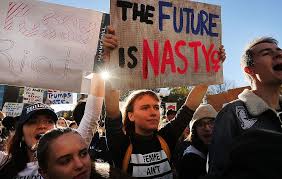 “People are realizing we can’t just march, we have to vote,” said Regina Bateson, a leftist candidate for Congress running against Republican Rep. Tom McClintock, the Sacramento Bee reported. Does Ms. Bateson and her fellow marchers not know that the 19th amendment, which granted women the right to vote, was passed by Congress June 4, 1919, and ratified on August 18, 1920?

If so many women are not voting, how serious can they be?

And really, do they go home happier after these feverish group cry-ins? What do they think they are accomplishing marching, yelling and screaming, while carrying vulgar signs with pictures of female anatomy? Look at their faces… twisted into ugly grimaces. It’s truly the march of the uglies.

But really, let’s get down to the details. What rights do these women not have as Americans? Is there something in the Bill of Rights that prevents them from voting, working, mothering, marrying, or even marching? This isn’t Saudi Arabia. 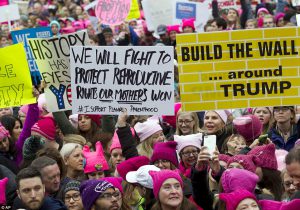 These screaming meemis aren’t missing out on any rights. They are just really pissed off that Trump won, and won a rigged election, and their candidate couldn’t even win with her own rigging. This is just a giant temper tantrum by really ugly women.

The good women of America aren’t buying the faux delirium of the pink-hatted hysterics, and I’m one of the good women of America. We are married to gentlemen, and we raised strong sons who are gentlemen. We work, we are employers, we contribute, and we faithfully vote because we are diehard American Patriots. And they are simply entitled haters, whiners, and losers who can’t articulate, in a single sentence, why they are marching.

Listen to these statements in one news article about why they march:

“I’m out here today because … enough already,” she said. “It’s important that we not lose hope.” (Hope. For. What? She never says.) 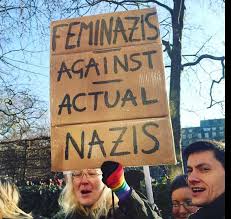 “I see women coming into the workplace that are incredibly competent, that are incredibly skilled,” but still have a hard time professionally, he said. “Men need to change the culture,” adding that there is more pay equity among unionized workers. (Union hack)

“Wisdom is experience gone wrong.” (Dear God, what does this mean?)

“I’m here because it’s making a difference not just for me, but for any kids I have in the future,” a teen said. (As long as she doesn’t abort them)

“It’s overwhelming how many reasons there are to be here.” (Tell me on, please.)

And from this article: 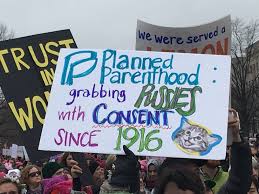 Porsche Kelly, a spoken-word artist from Oakland, reminded marchers of the struggles of minorities. “When you go back to your lives and throw away the signs, black women will still be asking, ‘Ain’t I a woman, too?’” (A spoken word artist… really?)

And some classy dames carried signs that read: “Vaginas brought you into this world; vaginas will vote you out.” 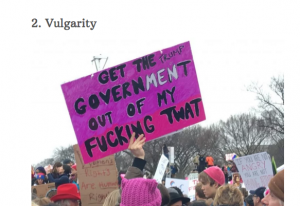 Another marcher said, “With what’s going on in society and the #MeToo movement in Hollywood and Harvey Weinstein and sexual assault, I think it’s a good time for young people to start using their voices,” Silva said. “I’m here for me and for the experience, to feel empowered around all these amazing women and people.” (Empty headed, amazing people.)

“I just feel like it’s time to stand up and fight back,” Morikawa said. “I think that women are the future.” (Um, The future of what?)

Janete Perez, co-chair of the San Francisco march, said, “2017 was all about letting people hear our voice. … What 2018 is all about is turning that energy into action.”

“I feel like the country is not what it’s supposed to be,” a 45-year-old Pleasant Hill resident said. “It’s focused on greed and making money and not paying attention to the people.” (BTW, the Estimated median Pleasant Hill household income in 2016 was $102,684, and Estimated median house or condo value in 2016: $713,411.)

“I don’t feel particularly oppressed but I want to make sure to stand here with all the women around and say, ‘for whatever you’re climbing to do, I’ve got your back,'” a Cincinnati woman said.

Sexual harassment, women’s reproductive rights — for one Nashville women, these topics were seen as taboo, things to not bring up at the dinner table. But not anymore.  “I can’t be polite anymore,” she said.  (Let’s get the lingo correct – it’s Abortion rights, not “reproductive rights,” which suggests they aren’t actually killing their babies. If they really care about reproductive rights, they’d criticize the Communist Chinese which limit women to one baby.) 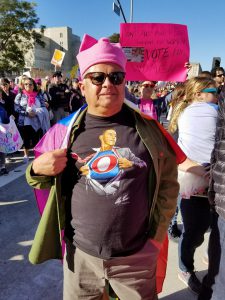 If these women are sincerely marching for a better life for women, for female empowerment and equality, all they need to do is look at the economic news in the U.S. right now. The good news is that everyone in America will reap the rewards of an improved economy and tax reform.

Lastly, the feminists of the Women’s Caucus in the California Legislature are strangely silent about their many male colleagues who have been accused of serious sexual harassment violations. Yet many of these women attended the marches around the state. Hypocrisy runs deeply on the left.