As with most of the fraudulent legacy media, Sacramento Bee columnist Marcos Bretón has portrayed Stephon Clark  to be some sort of martyred saint after his recent shooting death by Sacramento police: He’s a “loving father of two,” and “killed in his grandmother’s backyard.” The Los Angeles Times said of Clark: “Beloved, troubled young life cut short in police shooting.” Heavy.com said he was was “a stay-at-home father of two young sons.”Another headline read: “Sacramento resident Stephon Clark, unarmed, was fatally shot by police in his backyard.” CNN said “the man shot and killed by Sacramento police was turning his life around, his brother says,” even though he’d just been released from prison again the previous month. 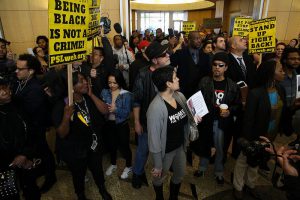 Breton’s tag line claims he is “Connecting the dots on issues, people and news in the Sacramento region.” Nothing could be further from the truth.

Breton had a column over the weekend in which he charged, “’Implicit bias’ replaces the ‘R’ word. This is how we explain cops killing black men,” referencing the Sacramento police officers who killed career criminal Stephon Clark March 18. In a recent column, Breton said “it will take seeing Clark as more than a ‘criminal,’ as he is too often branded by non-African Americans.”

Stephon Clark was black. One of the Sacramento police officers who responded to the 9-1-1 call that night was also black. And the helicopter using night vision to follow Stephon Clark as he ran from police after breaking car windows, can’t tell what the ethnicity of a fleeing suspect is. The police only knew that the perpetrator was running from them after breaking into cars and attempting to break into houses using a crowbar. Stephon Clark did not stop as ordered, and that made him dangerous to everyone, and not just to the police.

The media continue to make this police shooting about race, despite that one of the police officers was also black. This isn’t just about race. The outcome would have been the same regardless of who was running and did not follow police orders. And if it was a white guy who was shot by police, the media would be silent. The outcome was entirely under his control. He made the wrong decision many times, and paid the price of his choices with his life.

Sacramento City Councilman Jay Schenirer has also decided that he knows more about police pursuits than the Sacramento police officers. In a meeting with The Sacramento Bee editorial board last week, Councilman Schenirer, who is running for reelection, said Stephon Clark “should not be dead” and “we need to hold ourselves accountable, we need to hold the Police Department accountable.” That’s meaningless prattle done in political speak.

“We’ve got to figure out what went wrong so we can make sure this doesn’t happen again,” Schenirer said. “If officers need to be disciplined, that will all happen. I assume that will happen.” Asked why the officers would be disciplined, Schenirer said that was his opinion after watching video footage of the shooting. “(The officers’) reactions were, I think, too quick,” he said.

Jay Schenirer is not a cop, nor has he ever worked in law enforcement. Schenirer, a former caterer who fancies himself an education consultant, is a local politician through and through, and is disgracefully using this shooting to boost his reelection bid.

Stephon Clark had a lengthy juvenile court record dating back to 2012, with offenses that include pimping, grand theft, armed robbery and receiving stolen property. According to Sacramento Bee records, as an adult, Stephon Clark had been charged in four criminal cases since 2014 including felony armed robbery and assault, and endangering the life of a child. In 2015, Clark was charged with “pimping,” and in 2016, he was charged with domestic violence.

The most accurate predictors of crime are reflected in statistics: 70 percent of black children are born to single mothers who are poor, often young, live in bad neighborhoods, and are on welfare. They are also more likely to pass that poverty lifestyle on to their children.

In his January 1964 State of the Union address, President Lyndon Johnson proclaimed, “This administration today, here and now, declares unconditional war on poverty in America.” In the 50 years since that time however, U.S. taxpayers have spent more than $22 trillion on anti-poverty programs. Yet a significant portion of the population is now less capable of self-sufficiency, and more dependent on government than when the War on Poverty was waged.

In 2014, the Heritage Foundation reported the poverty rate was about 14 percent, ironically the same rate as in 1967, three years after the War on Poverty was announced.

Last summer the Washington Post ran an article claiming “Police have continued to shoot and kill a disproportionately large number of black males, who account for nearly a quarter of the deaths, yet are only 6 percent of the nation’s population.” The Sacramento Bee also continues to make this claim. The flawed assumption is that police killings should match demographics in America… another kind of twisted affirmative action.

Rather than continuing this twisted, flawed thinking, address the conduct, reaffirm societal expectations, and impose memorable consequences. Stephon Clark never understood that only he was accountable for his own actions – and that’s a failure in family and society, who all too often made excuses for his behavior.

SacBee columnist Marcos Breton blames white America; all white people are racists according to Breton, and that is why Stephon Clark is dead. “‘Implicit bias’ is a nice way of saying someone is racist without calling them racist. You have heard it more often recently in association with the police shooting of Stephon Clark last month,” Breton said. “Those biases can result in all-white workplaces, run by male CEOs who would never approve of a project that featured a diverse-cast movie not named ‘Black Panther.’ They are part of the social fabric that affect us in in many ways. With the police, implicit bias can kill,” Breton wrote this in his column.

As a guy who has never signed the front of a paycheck, Breton’s ignorance of “all-white workplaces, run by male CEOs” is distressing – and it implies his own bias and ignorance. Most employers are color blind, and are focused on results, output, happy clients and profitability. Breton, and leftists like him are what’s wrong with America. It’s President Johnson’s “Great Society” which failed black America. It’s Democrats and their deluded policies, who use minorities and the poor as sociological experiments over and over again, despite the atrocious outcomes.

The incomes and living standards of less affluent Americans were rising rapidly long before Johnson’s War on Poverty began, the Heritage Foundation reported. “In the decade and a half before the start of the War on Poverty, low-income Americans experienced dramatic improvements in self-sufficiency. The share of Americans who lacked self-sufficiency was cut nearly in half, falling from 32.2 percent in 1950 to 17.3 percent in 1965.” The War on Poverty was ostensibly created to increase Americans’ capacity for self-support, but exactly the opposite occurred. “The vast expansion of the welfare state has dramatically weakened the capacity for self-sufficiency among many Americans by eroding the work ethic and undermining family structure.”

Marcos Breton, Councilman Jay Schenirer, Mayor Darrell Steinberg get it all wrong surrounding the causes and effects of this shooting. And if they really care about Stephon Clark more than politics and reelection opportunities, their writings and policies would reflect an attempt to get at the root of what is plaguing black America – but they’d find themselves pointing fingers at each other.

Stephon Clark’s shooting is the result of a lifetime of hostile behavior and crime, defiance to living within societal rules and laws, and the dangerous, corrupt laws and policies of the left.