Where are the Gerawan Farming Workers’ ballots from the 2013 UFW decertification election? 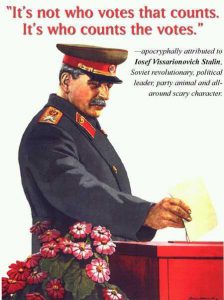 But where are the ballots? The decertification election took place November 3, 2013. After all of the ballots were in, the ALRB impounded them, refused to count them, locked them away, and initiated legal proceedings against Gerawan Farming. Then, less than two weeks later, the ALRB adopted the unwanted collective-bargaining agreement and mandatory mediation, and the UFW filed an enforcement action to force Gerawan to comply.

Two years later in 2015, an ALRB judge ordered the ballots destroyed from the labor union decertification election, rather than have them counted. The vote was expected to overwhelmingly support decertification, which would have removed the workers from the union’s undesired purview.

The ballots need to be located immediately, and out of the hands of the ALRB. When the judges asked ALRB attorney Todd Ratshin about the location of the ballots, he was unable to to say where they are located. “I believe the ballots are in a safe being preserved,” Ratshin said. “Do you know where,” the judge asked. “I believe they are in Visalia, but I am not positive,” Ratshin said.

The Ag Labor Board is composed of five members and a General Counsel, all of whom were appointed by Governor Jerry Brown. Brown created The California Agricultural Labor Relations Board in 1975.

Gerawan Farming, a family owned business, is the largest grower of tree fruit in California, both in number of employees and the amount of fruit that it grows. Gerawan, the highest paying fruit farming operation in the region, also grows and harvests substantial quantities of table grapes and wine grapes on thousands of acres of farmland in the Kerman area, and the Reedley/Sanger area.

The UFW won an election to represent Gerawan Farming’s workers 27 years ago. But after only one bargaining session, the union disappeared and wasn’t heard from for more than 20 years. In October 2012, the union reappeared to impose a contract on Gerawan Farming and its employees — without a vote of the workers.

“The ALRB estimates that 2,600 votes were cast by Gerawan Farming workers in the November 2013 decertification vote,” I wrote in 2016. “Even if the entire ALRB budget is not devoted to the Gerawan Farming cases, just the required increase in spending to handle the Gerawan Farming cases is more than $10 million. This means ALRB has spent more than $4,100 per vote to deny farmworkers their legal rights to be heard.” That was two years ago, and the ALRB hasn’t stopped its witch hunt against Gerawan. So while the American media is focused on Robert Mueller’s faux $17 million “Russian Collusion” case, California’s ALRB has spent almost as much suppressing the ballots of immigrant farm workers.

The ALRB Lost Sight of its Mission
The Court finds that the ALRB “effectively lost sight of the . . . value of protecting the farmworkers’ right to choose.”

The judges’ decision, all 139 pages of it, make it very clear they take this matter extremely seriously. The court’s decision mandates that when the ALRB calls an election based on a sufficient showing of support, the ALRB must count the ballots.

The decision also recognizes that the decertification drive was “a worker-initiated and worker led movement.” (p. 129) That conclusion, along with the more than majority support from the workers (as certified by the ALRB) asking for an election on whether to decertify the UFW, underscores why it is so important to count the ballots now.

“Thankfully, the Court has gone to great effort to remind the ALRB of what its core purpose is, which is to protect the workers’ right to vote,” Gerawan Attorney Ron Barsamian said. “I am extremely happy for the workers who have long suffered at the hands of the UFW and the ALRB in this matter.”

During oral argument, Gerawan attorney Stanford Law Professor Michael McConnell told the judges they were the last redress the workers had, and asked, “What harm could it cause to count the ballots? What are they [the ALRB] scared of?”

The Gerawan workers have been nothing if not strong and determined throughout this lengthy battle with a giant, well-funded state agency – even in the face of vile intimidation tactics worthy of Josef Stalin – as well as intimidation from the UFW. Both the ALRB and UFW officials have intervened in these legal processes with lies, shady, thug tactics and undemocratic behavior.

This legal decision is quite thorough and comprehensive, and appears to be written in such a way as to tie the hands of the California Supreme Court, should it be appealed, largely because of the state Supreme Court’s decision upholdingCalifornia’s Mandatory Mediation and Conciliation secrecy law.

Despite the Fifth District Court of Appeals in Fresno unanimously striking down California’s Mandatory Mediation and Conciliation secrecy law as unconstitutional in 2015, the California Supreme Court went in the opposite direction and decided last year that the state can force an agency-dictated “collective bargaining agreement” on an employer and its employees. That decision is on appeal with the United States Supreme Court.

The arguments centered around so-called “Mandatory Mediation and Conciliation” amendments to the Agricultural Labor Relations Act, which the California Court of Appeal ruled violate equal protection principles and unlawfully delegate power to the state’s Agricultural Labor Relations Board allowing the United Farm Workers to impose a contract on Gerawan Farming and its employees.

In May 2015, that court unanimously held that the ALRB’s forced contracting scheme is “the antithesis of equal protection” because it imposes a contract “by administrative edict” based on “a distinct, unequal, individualized set of rules” for each employer.

Not The Last Legal Swipe

As far back as August 2013, California Superior Court Judge Jeffrey Y. Hamilton, Jr., took one of the ALRB attorneys to task for working overtime to stop farm workers from voting on whether to decertify the UFW as their collective bargaining representative.

Hamilton accused the ALRB lawyer of “overreach” in his legal authority in trying to stop the vote.

“So the court is very suspect of the ALRB’s position here,” Hamilton said. “It almost seems like it’s in cahoots” with the UFW.

It appears that the “cahoots” days between the ALRB and the UFW may be coming to an end.