Democrats’ Plan: Tear Down America and Eradicate the Country of Conservatives 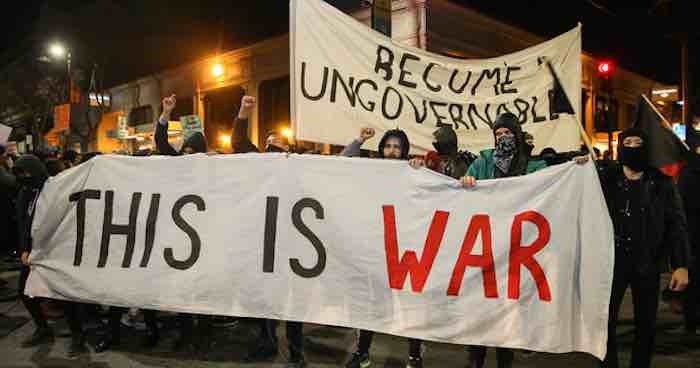 In a collective national temper tantrum, leftist-Democrats across the country continue to openly reject the election of President Donald Trump in 2016.

I used to just write about the “Two Californias,” a phrase coined by Victor Davis Hanson to describe the urban elite, out-of-touch coastal communities, and the rural inland agricultural areas. “We may speak of the richness of “diversity,” but those who cherish that ideal simply have no idea that there are now countless inland communities that have become near-apartheid societies, where Spanish is the first language, the schools are not at all diverse, and the federal and state governments are either the main employers or at least the chief sources of income — whether through emergency rooms, rural health clinics, public schools, or social-service offices,” Hanson explained.

Today we are living in “Two Americas;” The left, and Democrats no longer accept the results of any election that they don’t win. They no longer believe that peaceful, respectful transfers of power in this country are determined by elections.
We are in a civil war.

“Democratic elections change government office holders and policies. Often the changes in policies represent a change of emphasis,” From Bullets to Ballots: The Election of 1800 and the First Peaceful Transfer of Political Power explains. “Sometimes they are more significant but not so drastic that the defeated party cannot readily accept them at least until the next election.”

This is no longer the way in America. This temper tantrum by the left has escalated to bullets, with the shooting of Republican Rep. Steve Scalise, and several others at the Congressional baseball team practice in June 2017, and celebrities dreaming of killing President Trump.

The only legitimate exercise of power in this country, according to Democrats, is its own.

We’ve been building to this place for many years. The most notable of this was with the challenge to the election of President George W. Bush in 2000 by Democratic opponent Al Gore.

Even in the highly charged and contested election of 1800, both political parties believed that the fundamental principles of democracy were at stake in the conflict.

Today, he left does not accept the fundamental principles of democracy.

We conservatives are still arguing the importance of the rule of law based on the United States Constitution and Bill of Rights, while the Democrat’s system is that any part of government that it runs gets total and unlimited power over the country.

From 1912 until 1964, for fifty-two years, there were five Republican Mayors of San Francisco in a row, including “Sunny Jim” Rolph, Angelo Rossi, Roger Lapham, Elmer Robinson, and George Christopher, according to the San Francisco Republican Party. These mayors built the Civic Center, the iconic Palace of Fine Arts and Legion of Honor, formation of the Municipal Railway system and construction of the tunnels connecting the western and eastern sides of the City, and built the Hetch Hetchy water and power system, most of our public schools buildings — K-12 and the City College of San Francisco still in use, SFO, the SF Zoo, Stern Grove, Kezar Stadium, and Candlestick Park.

Today, visitors in San Francisco need a human defecation map to navigate the needle and poop-infested streets, under decades of Democrat-monopoly. As Oakland Mayor, Democrat Jerry Brown left the city an even bigger drug and crime-ridden hellhole than it already was. Voters rewarded him with another two terms in the governor’s office to inflict his Oakland-style politics on the entire state.

As for victimized American children, the Department of Justice recently announced the arrest of more than 2,300 suspected online child sex offenders during a three-month, nationwide, operation. “The task forces identified 195 offenders who either produced child pornography or committed child sexual abuse, and 383 children who suffered recent, ongoing, or historical sexual abuse or production of child pornography.  This is taking place right under our noses. And the left is strangely silent about this.

“But even more troubling is the fact that Hillary Clinton recruited U.S. high-tech biggies such as Google, Cisco and Intel to help Russia set up a high-tech hub under the questionable auspices of the Russian Skoldovo foundation,” IBD added.

Trump exposed the shadow government because he isn’t in the club. And he hired many outsiders to help him.

The quotes in red are from a speech by Daniel Greenfield to the South Carolina Tea Party Coalition Convention. They are not my words, however, they really are. He just says it so beautifully.