Democrat California lawmakers are pushing legislation to create jack-boot agents of government through a “Fake News Advisory Council” – an Orwellian ‘Ministry of Truth’ for the news they don’t like. 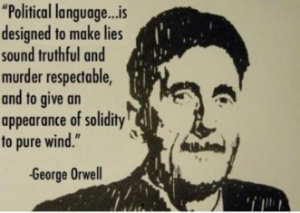 After having my Capitol Press Credential revoked in 2015 and only reissued after an Open Records Act request of 10-years of press credential applications, and viable threats of a First Amendment lawsuit, it appears Democrats in the California Legislature still don’t believe in making no law abridging the freedom of speech, or of the press.

Several of the proposed “fake news” bills say, “There is evidence to suggest that the dissemination of ‘fake news’ through social media influenced the outcome of the 2016 U.S. Presidential election,” as justification for attempting to create a government control of the media.

The ultimate plan is to expand beyond this unelected “advisory council” to create actual legislation authorizing state government to make this determination.

I know this because the original language in SB 1424 said just that: “This bill seeks to rein in the spread of false information through social media… putting the government in the position of determining what is or is not “false information…”, …and because I wrote about this in April.

In my article, Dem Sen. Richard Pan New Bill to Force News Sites to Use ‘Fact-Checkers’, I explained: “Sen. Richard Pan (D-Sacramento) is the author of the “Online False Information Act,” a new bill that would require anyone who posts any news on the Internet to verify all information through ‘fact-checkers.’ Sen. Pan does not name who these ‘fact checkers’ are, but I’m sure the State of California will create a new unelected body of elite state employees to oversee this.

“Sen. Pan’s bill would ‘require social media Web sites to disclose their ‘strategic plan to mitigate the spread of false information’” (to the California Ministry of Truth?), the first bill analysis explained.

Apparently this sounded just a little too authoritarian for some Democrat committee staffers writing the analyses, so Pan accepted amendments with the understanding that eventually this advisory board would lead to legislation allowing the state to determine what news is fake or not.

Americans are already experiencing censorship on Google, YouTube, Facebook and Twitter. “Censored! How Online Media Companies Are Suppressing Conservative Speech” exposes how these major tech companies work with groups that hate the right — such as the Southern Poverty Law Center.

The State of California Ministry of Truth

Today, as amended, SB 1424 “Would require the Attorney General, not later than April 1, 2019, to establish an advisory committee to study the problem of false information on Internet-based social media platforms and to make recommendations.”

This attempt to push state-authorized news media is not limited to California’s lawmakers. Washington Gov. Jay Inslee signed a bill this year that directs schools to create a policy showing how they will implement media literacy instruction in schools. The law also calls for a survey to learn how educators are already teaching news and media literacy.

Sen. Hannah Beth Jackson (D-Santa Barbara), another Orwellian authoritarian, has authored Senate Bill 947 to authorize California’s schools to teach kids how to spot “fake news.” This bill requires the CA Superintendent of Public Instruction, by December 1, 2019, and with yet another unelected advisory committee, to identify best practices and recommendations for instruction in digital citizenship, Internet safety, and media literacy.

A similar California bill was introduced in January 2018 and has already passed the state Senate with no Republican votes. SB 830 by Sen. Bill Dodd (D-Santa Rosa) would establish the Instructional Quality Commission as another advisory board to the State Board of Education, and requires this new body to develop, adopt, modify, or revise, a model curriculum in media literacy. It requires the model curriculum to address, but not be limited to, the instruction of students in how to:

According to the legislation, the state’s Instructional Quality Commission would develop a model curriculum and create a list of resources and materials for teachers. It appears the commission is made up of some really radical teachers and “educators” throughout the state.

Some dubious organizations, the Media Literacy Now and Common Sense Kids Action, have been working to craft model legislation, inspired by the Washington State law, to make it easier for other states to adopt the same approach. (Former Senate President Darrell Steinberg (D) is on the board of directors of Common Sense Kids.) Media Literacy Now says its mission is “To spark policy change in every state and at the national level to ensure all K-12 students receive comprehensive media literacy education and skills.”

If memory serves, this is what public schools used to do before the left took over and started feeding our kids a steady diet of leftist pabulum.

“We will use the vehicle of legislation to raise awareness, ignite passion and generate action,” Media Literacy Now says.

A Brookings Institute article on How To Combat “fake news” addresses the same. It is no coincidence that state Legislatures, and lefty think tanks only started caring about ridding the country of “fake news” after Donald Trump was elected. “Fake news is generated by outlets that masquerade as actual media sites but promulgate false or misleading accounts designed to deceive the public,” the Brookings Institute says. “When these activities move from sporadic and haphazard to organized and systematic efforts, they become disinformation campaigns with the potential to disrupt campaigns and governance in entire countries.”

“The constantly changing definition of fake news can give candidates and political parties a judicial weapon aimed at preventing the release of disturbing information during an election,” the Brookings Institute concludes.

The French Have a Law – what can I say?

A new French law aims to separate truth from fiction, but it will mostly just give the government more control over the media, Foreign Policy news reports. “The bill proposed by Macron would target a new category of fake news not currently covered by the existing law. Macron proposes rapid intervention to report, identify, and remove fake news by creating new implementations of référé, a special procedure that allows one party to refer a case to a single judge to ask for a provisional order.” 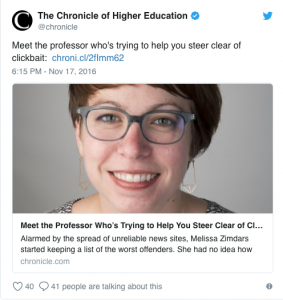 “False, Misleading, Clickbait-y, and Satirical ‘News’ Sources”, was compiled in November 2016, by Melissa “Mish” Zimdars, an Associate Professor of Communication and Media at Merrimack College in Massachusetts.

Predictably, many news articles ran with her list under headlines that said: “Here’s a handy cheat sheet of false and misleading ‘news’ sites.”

Why the need for legislation?

Democrats are so unhappy with the outcome of the 2016 Presidential election, the only answer they can deal with over the election of outsider Donald Trump is that most of America was too stupid to understand that fake news was being pushed at them by Conservative news outlets.

According to Sen. Bill Dodd, the author of SB 830, “The prevalence of fake news garnered national attention in the recent Presidential election, where false and misleading stories from hoax websites outperformed actual news stories in terms of social media engagement. This flood of content can make it difficult for the public to differentiate between reputable news sources and false or misleading claims. The practice of advertisements masquerading as news has also seen an increase in recent years.”

Supporting the California bills below, but not limited to: