The doomsday predictions of global-warming alarmists would have us believe there are more droughts, more extreme hurricanes and tornados, that arctic snow caps are melting, and all coastal cities are in danger of rising seas. 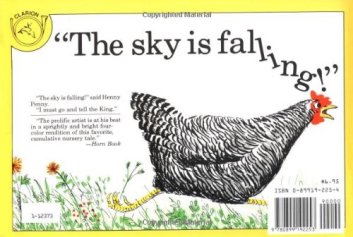 Convinced the sky is falling, Henny Penny and a band of gullible friends march off to tell the king, only to meet their end at the hands of a wily fox.”The sky is falling!” Henny Penny said, in a silly tale about a chicken who believes the world is coming to an end.

Does this sound familiar? The defacto leader of “The Sky is Falling” Chicken Little Party, Gov. Jerry Brown warned in 2016, “If Trump turns off the satellites, California will launch its own damn satellite,” after he called  Trump a “fraud” at the Democratic National Convention for his continued denial of global warming.

When President Donald Trump pulled the United States out of the Paris Climate Accord, California Gov. Jerry Brown said the world is only just beginning to feel the environmental harm inflicted by the Trump administration. “He has set in motion initiatives that will cause damage,” the Los Angeles Times reported Brown said, comparing the planet under Trump’s climate policies to a person who has just fallen from the top of the Empire State Building. “You are falling down four stories, but have 80 to go,” he said. “Maybe you are not damaged yet, but it is certain you will die.”

“The governor said his overriding concern is that global progress has stalled. ‘This is real,’ Brown said. ‘It is far more serious than anybody is saying.’”

Global Warming hypocrite Tom Steyer warned: “If Trump pulls the US out of the #ParisAgreement he will be committing a traitorous act of war against the American people.” Remember that Steyer made his billions on coal and oil.

When President Trump announced his decision to withdraw from the Paris climate agreement, he said he was putting American jobs ahead of the needs and desires of other countries.

My favorite money quote: “I was elected to represent the citizens of Pittsburgh, not Paris,” Trump said in June 2017.

Trump said the agreement was “very unfair” for the U.S., especially the U.S. coal industry, NPR reported. And he reported good news for the battered industry: the development of new mines.

Yet doubling down once again, last week California Gov. Jerry Brown signed two bills making it all-but-impossible for the Trump administration to drill for oil in federal waters off California by banning any new infrastructure to support the projects.

Apparently Gov. Brown hates the people of California who need jobs. Under his leadership, California has not only lost hundreds of thousands of voters and residents through outbound migration to Texas, Arizona, Nevada and Florida, the state has shifted to a part-time economy. Other than Silicon Valley, Hollywood, and a threatened agriculture industry, Democrats in California have shunned manufacturing jobs, and replaced them with part-time, minimum wage workers who need welfare to make ends meet. 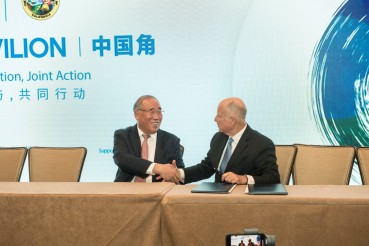 Following the latest bill signing, Brown said in a statement: “California’s message to the Trump administration is simple: Not here, not now. We will not let the federal government…destroy our treasured coast.”

The climate change hysteria is so vast, CBS reports, “UN says number of hungry people worldwide is growing, with climate change partly to blame.” The UN claims climate change is “wreaking havoc on crop production” in much of the developing world, the United Nations said Tuesday, CBS News reported.

California politicians have gloated over being the first state to enact such aggressive green energy and greenhouse gas busting policy, but have yet to produce any proof that these oppressive and business-killing laws have had any “green” results.

How To Power The Future

I spoke with Daniel Turner, founder of Power The Future, and organization dedicated to the men and women who “power the future” through energy jobs. Turner and Power The Future are an all-of-the-above supporter of energy production. Hear! Hear! This is exactly what California needs, not Gov. Brown’s recent approval of Senate Bill 100, setting a 100 percent clean electricity goal for the state, and issued an executive order establishing a new target to achieve carbon neutrality – both by 2045.

Ironically perhaps, Brown kicked off his 2018 Global Climate Action Summit, Wednesday, and welcomed China’s 120-plus attendees – the largest country delegation at the event –

As Daniel Turner points out, China is the world’s number one polluter, exempt from the sacred Paris Climate Accord, and the land of forced child labor in coal mines. It’s odd Brown would welcome this, yet he rolled out the red carpet for the Chi-Coms.

Turner and I discussed several issues:

Brown never addresses that energy costs in California are among the highest in the nation, and only continue to increase due to the California’s mandates of renewables in electricity production.

Since 2008, Electric Rates In California, Adjusted For Inflation, Have Increased 12% While Declining Almost 3% Elsewhere In The United States.  Los Angeles Times

The other important issue we discussed is the  vast untapped energy resources in the Monterey Shale Oil Reserve. Since Jerry Brown was reelected Governor in 2011, I’ve been writing about California’s Monterey Shale formation:

“California sits on two-thirds of America’s shale oil reserves.  The Monterey Shale Formation is four times the size of the Bakken Shale Reserve in North Dakota, which is now the largest oil producer in the country behind Texas.

Along the Western side of the San Joaquin Valley in the middle of the state, the Monterey Shale Formation encompasses several hundred miles, where water has dried up and unemployment is the highest in the state.”

A study found that exploiting Monterey shale could generate up to 2.8 million new jobs and add 14 percent to the state’s GDP by 2020, near the peak of production. Instead, California’s Governor wants to ban the sale of internal combustion passenger vehicles in the state, and has signed legislation to mandate 100% renewable energy by 2045.

Most countries around the world think that it’s a good thing to have cheap energy. But in California, we have plenty of cheap energy available, just not the political will to access it. The state is awash in ultra cheap natural gas, yet in California, our corrupt government finds a way to create an energy shortage, and charge rate payers the highest rates in the country.

It’s as if Gov. Jerry Brown is trying to destroy California.