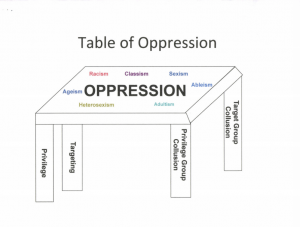 Examples of what’s being taught:

The Santa Barbara Unified School District adopted curriculum from the Institute for Equity in Education, a project of JUST Communities:

In his community of Elk Grove, CA, Greg Burt, the Director of Capitol Engagement with the California Family Council, is in the midst of reviewing some new state approved curriculum published by textbook publisher Pearson Press, that parents were encouraged to review Sept 10. Burt took a picture of a first grade lesson on Citizenship featuring Gavin Newsom as the “Champion of People’s Rights.” 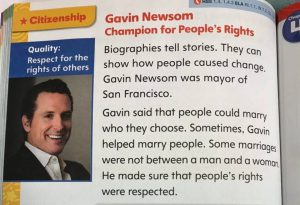 It’s curious why Gavin Newsom, the former Mayor of San Francisco and California’s Lt. Governor, made the pages of an elementary textbook when former California Gov. Ronald Reagan, or current Gov. Jerry Brown are not in it. This is campaign hype; Newsom is running for Governor, but isn’t the Gov yet.

In a second grade textbook Burt shared, the lesson on honesty did not feature “Honest Abe” Lincoln as most of us were taught, but instead chose a cross-dressing politician few have ever heard of. “José Julio Sarria, Champion of Gay Rights,” is the featured lesson on honesty because “he decided to be honest. He told people he sometimes dressed as a woman. He was the first person to do this when running for office. He did not win. But he made people know they had to pay attention to the gay community.” The lesson plan asks the second graders to “write about how José Julio Sarria’s honesty inspired others.” Teachers are told “Answers will vary but include that other gay leaders ran for office.” 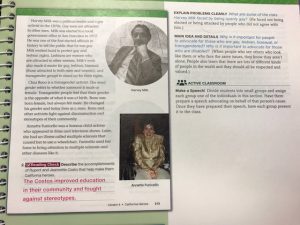 Curriculum deemed appropriate by the California Department of Education for fourth graders includes gay activist Harvey Milk: “Gay men are attracted to other men. Harvey Milk was one of the first elected officials in history to tell the public that he was gay.”

There is already a Harvey Milk Day in California, honoring the life and death of this openly gay politician. Yet I’m not finding anything about the pedophilia or pederasty Milk engaged in. Gay journalist Randy Shilts chronicled this in a book, telling how Harvey Milk in his late 30’s, hooked up with a number of younger men, including underage men/boys, with whom he was intimate.

Earlier this year, a friend sent me examples of a reading comprehension assignment for 5th grade at a school in the Central Valley, claiming that the arctic ice is melting and threatening the lives of polar bears (below). The curriculum solution is that polar bears and seals need to be added to the endangered species list… no climate change indoctrination here. 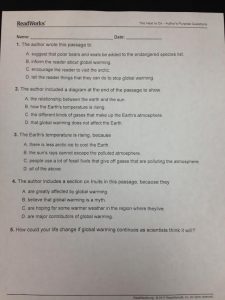 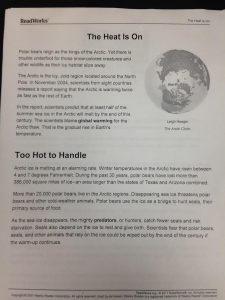 This is happening all across the state of California.

Los Angeles attorney Eric Early is working with a group of Santa Barbara parents and teachers on a complaint against Santa Barbara Unified School District over the blatant curriculum shared above. Another parent has contacted me about her unpleasant/hostile involvement with the Ethnic Studies curriculum committee in the Santa Barbara district. 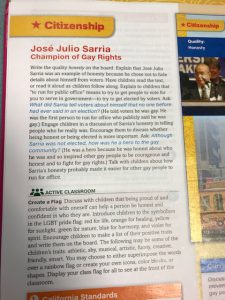 The Santa Barbara School Board is considering three memorandums of understanding that would allow Just Communities Central Coast to continue to plan and facilitate teacher development and training programs addressing diversity and inequality issues. The Just Communities Central Coast’s mission is ostensibly to improve inclusion and empowering individuals from schools, nonprofit organizations and other entities, because “Social change doesn’t take place in a vacuum.”

Most parents aren’t sending their children to school to learn social justice activism. Reading, writing, math, science, history, language, geography, art, music and sports are what most parents expect their children will be taught. But that is just not the case anymore. Evidence of this is seen on the nightly news with Antifa protests, universities banning speakers, and college snowflakes who melt at the mere suggestion of a real or imagined transgression.

As Lance Izumi explains, “Thus, in a time of cultural relativism, with divergent views on basic issues and values, some significant proportion of parents and students will clash with the one-size-fits-all approach of public school authorities.”

As we see in Santa Barbara, parents and teachers have brought in attorney Eric Early to challenge what they consider curriculum inappropriate and detrimental to their children. Early describes the material as “political and divisive.” While the Santa Barbara school board tabled the vote on the memorandums of understanding for now, parents are suspicious since many of the meetings with Just Communities Central Coast and the school board took place behind closed doors.

Early says the Santa Barbara proposed curriculum is “patently discriminatory against Caucasian and Christian students, and is a violation of California Government Code and California Education Code.

Izumi, a school choice proponent, says, “Unless one adheres to a ‘my way or the highway attitude, this clash argues for giving parents greater choices in schooling options outside the public system. And as recent national and state polls show, rising percentages of parents and the public want that choice.”

If you are still unsure about some grand conspiracy to indoctrinate California’s children, the American Federation of Teachers (labor union) has lessons on “How to Combat Gender Bias.”

My particular favorite is number #4, with this cute gender-neutral picture: “We should avoid grouping children by their gender. Make sure all classroom rules apply to a multitude of sexes. Have equal books, guest speakers, films on males, females, transgender people, etc., to create wide exposure and to normalize these ideas for children.”

Is it any wonder that recent national and state polls show rising percentages of parents and the public that want school choice?