The hysterics the past few weeks has indeed not weathered well on America’s so-called feminists who demonstrated once again that they allow feelings to rule over rational thought and logic, in their devotion of Alynski “means-to-an-end” tactics. 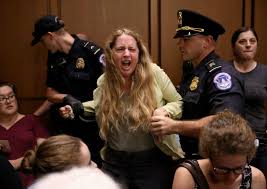 In their attempt to run SCOTUS nominee Brett Kavanaugh out of Dodgeby protesting his confirmation hearings, their antics have shown just how ridiculous, nonsensical and preposterous they are.

Ironically, they are using “female hysteria” to get away with their anarchy… but it’s just not fooling anyone. During the Victorian era, “female hysteria” was a common medical diagnosis in women. “Galen, a prominent physician from the second century, wrote that hysteria was a disease caused by deprivation in particularly passionate women: hysteria was quite often in virgins, nuns, widows and, rarely, in married women,” Victorianera.org reported. Really, Democrats just affirmed that old weak, hysterical stereotype of women. The rest of us were at work or at home with our kids.

Today we refer to these hysterical barking hags as man haters, radical feminists, college professors, shrieking uglies… take your pick. The common denominator in all is shrieking (not all are ugly, but the shrieking contorted faces are). 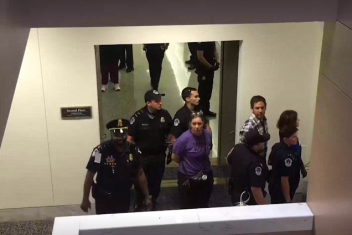 What was their objection of Kavanaugh? Was it his more than 300 judicial decisions in 12 years as a Judge on the U.S. Court of Appeals for the District of Columbia? Or his commitment to interpreting the law as it is written? Or that he has consistently fought for Constitutional originalism, reined in government agency regulatory abuses? Or that he is helping bring about the end of the era of agency bureaucrat domination because he believes the Constitution which says Congress should make the laws, not career bureaucrats?

No. These shrieking harpies claimed Kavanaugh would single-handedly overturn their precious Roe v. Wade, taking away their God-given abortion-on-demand “right.” CNN reported Kavanaugh’s confirmation hearing testimony “reinforced his past writings suggesting he would permit the government to more strictly regulate abortion, for example, with additional requirements that could delay the procedure or stiffer rules for physicians who would perform it.”

These hysterical harridans didn’t call a press conference to challenge his decisions; no, they threw themselves at the doors to the hearing room, sobbing and clawing at the doors. They collapsed in the Capitol hallways and had to be dragged away. They dressed as “Handmaids” and claimed Kavanaugh will enforce a dystopian America where women have no rights and are forced to have children for the ruling class. They ambushed Senators in elevators, cornering them aggressively, simultaneously screaming and crying.

And to think these women cry about “toxic masculinity?” I’ll share a bus seat any day with a manspreader over a shrieking barking harpy.

While these protests may have made for great Twitter pics and videos, from which faux journalists wrote entire fake news articles, this vile behavior cannot be allowed. This is not peaceful assembly. Much of the behavior of these violent, overwrought crones was dangerous. One level of antics led other groups of nasty ogresses to up the ante, and try something even more hysterical, more dangerous, in their misguided attempts at total anarchy.

Ben Sasse (R-NE), referred to the disruptions as “hysteria,” and said women had been holding “screaming protests saying women are going to die” for thirty years, Quartz reported. “It’s not surprising to see unprecedented protests,” said Erica Sackin, a spokeswoman for the Planned Parenthood Action Fund. “We are at an unprecedented moment and our fundamental rights are at stake … People are fed up with the hiding, the withholding of information and the politicking to strip people of their health care and constitutional rights.”

More of the 30-year hysteria Sen. Ben Sasse talked of…. no one is stripping “people of their health care and constitutional rights.” Erica Sackin should be fired for deliberately lying.

Perhaps it is a good thing that these women are paid protesters because with their hysterical demonstrations, they have also demonstrated that they are unemployable. What employer would hire even one of these toxic, nasty women? When they don’t get their way, or feel put down or insulted, you can bet they’d turn the entire company on end with threats of civil rights violations and legal action.

I’ve seen this happen particularly in state employment, where every transgression, real or imagined, is treated as legitimate, and the hysterical woman maintains her throne in the now-toxic office or agency.

These women are not serious civil libertarians; they are wretched shrews seeking to tear down institutions. They are anarchists seeking power and control in a country that reviles them.

As I recently wrote, “Every feminist I’ve ever met has had an abortion, led teen and college years full of promiscuity, alcohol and drugs. Mostly white and middle to upper class, educated and spoiled, they rebelled against decent parents, and the ‘boredom’ of living a normal, virtuous life.”

These vile women should not be allowed into the United States Capitol, nor any state Capitol in the country. Their demonstrations of bedlam and lawlessness, played out daily on the evening news and social media, made it painfully apparent they are mentally unwell — not right in the head — and need to be treated accordingly.

Let’s start with arrests for assault, intimidation, resisting arrest, violating others’ rights to freely assemble, and for forcing the shut down the Senate Office building. These were not peaceful protests, and these barking shrews need to be made an example of what happens in America to people who violently protest, while violating others’ rights, while trying to shut down a Supreme Court confirmation hearing.

They cannot be allowed to get away with this, nor should the Senators and staff members who allowed these marching shrieking, shrill hags into the hearings and Senate building.

The vile radicalized Left in this country has been more recently allowed to get away with violent demonstrations, from Occupy to Antifa, to BAMM, as well as the idiot snowflake children masquerading as college students on universities across the country. They must be treated with the rule of law when they operate outside of it.

A Federal Grand Jury should be convened to investigate the Judiciary Committee Senators who deliberately sabotaged the Kavanaugh SCOTUS nomination, with false accusations of sexual assault and felonious teenage flatulence. The Democrat Senators who allowed the parade of shrieking harpies into the hearings also need to be investigated.

And the March of the Shrieking Uglies will continue on unless and until they are treated accordingly, with not just our disdain, but with our laws.