Democrats and the Terrible, Horrible, No Good, Very Bad Day

In the 1972 children’s book, Alexander and the Terrible, Horrible, No Good, Very Bad Day, everything goes wrong for poor Alexander. He wakes up with his chewing gum in his hair, gets stuck in the middle seat of the carpool, loses his-best-friend status during recess, his mom forgot to give him dessert in his lunchbox, and it just gets worse. 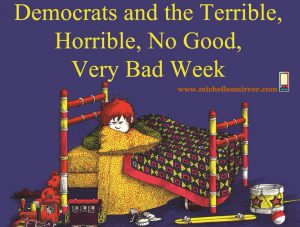 They still believe there’s absolutely no way voters could have rejected Hillary Clinton and Democrat rule.

Democrats even failed at cheating and voter fraud to win the 2016 election.

Barack Obama and Hillary Clinton can’t even fill an auditorium out on the campaign trail!

MSNBC anchor Nicole Wallace recently unloaded on Trump supporters claiming the real “mobs” in America are those who attend Trump rallies. Absent from her mob discussion was those leftists harassing Trump administration staffers or Republican politicians and candidates in restaurants and airports across the country.

On Wednesday, several pipe bombs were sent to Democrat leaders, none of which detonated. These suspicious packages were sent to Barack Obama, Hillary Clinton, George Soros, New York Governor Andrew Cuomo, former Attorney General Eric Holder, and Rep. Maxine Waters. (This sounds like the ‘Ship of Fools‘ cast of characters — the new book by Tucker Carlson)

The return address name on the suspicious packages sent to Clinton, Obama, Holder and Waters belonged to Rep. Debbie Wasserman Schultz. Several investigative journalists (including this one) have said this stunt seems designed for maximum political and media optics, and not maximum damage.

The political Left has been caught orchestrating attacks on themselves in the past, to make it look as if the right attacked.

On Facebook, following the odd bomb threats I posted:

I condemn the use of bombs for political disagreement… and shooting them on a softball field… and mailing Ricin and coat hangers to their homes… and beating them up while they are mowing their lawns… and falsely accusing them of sexual assault… and knifing them… and hurling bricks and boulders through their office windows… and burning their campaign offices… and doxxing them… and beating them up on college campuses… and mobs confronting them and screaming in their faces at restaurants… and sending politicians’ wives a graphic video of a beheading… and threatening to shoot members of Congress who voted against Kavanaugh.

I even opined that this smacks of a set up, particularly if the FBI reports there are no forensics to track in these so-called “amateurish bombs.” Someone who makes amateur bombs does not have the capability to scrub the forensic evidence from the devices and/or packaging.

Because I’m a Navy Explosive Ordnance Disposal (EOD) mom, I follow a few military explosive ordinance specialists on Twitter. Their feeds were funny, and accurate.

Tom Sauer, EOD Veteran  said, “Bottom Line: Whoever made that wanted it to be painfully obvious to anyone and everyone that it’s a “bomb.” This is nearly the same as a bundle of road flares wrapped together with an old-timey alarm clock ticking away.”

And he added, “‘Hoax Devices’ are FAR more common than real ones. In which case, we should ask ourselves what the motives of the ‘bomber’ are and ‘who benefits?’ Go ahead. Think deeply and critically.”

After dozens of fraudulent “racist” and violent hoaxes by leftists, college professors, and college students, the incredibly amazing timing and choice of “victims” of these suspicious packages appears to be a failed October surprise.

Lastly, the Democrats chosen to receive the suspicious packages makes me scratch my head. Barack Obama, Hillary Clinton, former Attorney General Eric Holder and former CIA Director John Brennan… all of the former administration. They are not running for anything. They are largely irrelevant.

In the end of Democrats and the perpetual Terrible, Horrible, No Good, Very Bad Day, odds makers say this was likely just another False Flag operation from the “by any means necessary” crowd.

While it has been a terrible, horrible, no good very bad day for the left, some days are like that, even in America.

Kurt Schlichter summed it up best: “Leftist are smart about one thing, and one thing only – they choose enemies who are unlikely to treat leftists as leftists would treat them.”

Remember, it was Hillary Clinton who recently said, “You cannot be civil with a political party that wants to destroy what you stand for, what you care about.” And Hillary on Wednesday changed her tune: “It’s a time of deep divisions and we have to do everything we can to bring our country together.”

Lastly, Tom Sauer points out, “If they’re functioning pipe bombs, why / how did they transport them to Quantico? Anybody see a blasting cap or detonator in there? I know I have less info than the FBI does, so I look forward to learning their determination.”

The left is full of liars and frauds, which makes this pipe bombs attack difficult to believe.