8/3/20 UPDATE: BARTLETT IS LOOKING FOR A BACK ROOM DEAL

Orange County Supervisor Lisa Bartlett knows beyond a doubt that she must stay in office beyond eight years. It must be some sort of divine calling. As those who have been following this issue the last few weeks — early in July Supervisor Bartlett brought forward a proposal to the Board of Supervisors to place on the ballot a cynical measure that would allow her to serve extra time in office if it passed. Billed as closing a “loophole” that allows termed out supervisors to leave, and then come back (said loophole has been used once in the history of term limits in OC) by allowing every supervisor to serve twelve instead of eight years in office. Perhaps, most significantly, Bartlett had made a commitment to me personally (so presumably to others) that if she was to bring forward a proposal it would be vetted, and brought around to different groups in the county for their input. In fact she said that ideally signatures would be gathered demonstrating it was “from the people” not from the Board.

Um, those commitments and sentiments turned out to be untrue, as she threw this self-serving measure on the ballot. While she had the support of her Democratic colleague Doug Chaffee, and county public employee unions, she was unable to persuade her more conservative colleagues — Andrew Do, Michelle Steel and Don Wagner.  Without three votes she pulled the item from the mid-July meeting agenda.  But then, two weeks later, she reagendized the same item yet again. Once again, not having three votes, she pulled the item off of the agenda.  Well, word has it that she is now actively lobbying for that third vote again because while there are no regularly scheduled Board meetings before the deadline to place something on the ballot, she can call a special board meeting this week and ram it through.

Talk about a crappy process. A new ballot measure written in a back room, introduced at a hastily called special meeting, and placed in front of voters some 5o or so days before ballots are mailed out. This is the kind of stuff that we expect from unscrupulous actors, and desperate politicians who do not want to leave office.

Anyways, I want to encourage you to continue to reach out to the Supervisors and tell them to reject calls for a special meeting, and reject the idea of a back-room deal and putting a “lipstick on the pig” measure on the ballot, the effect of which would be to allow Lisa Bartlett, who knew about her term limits when she first ran for Supervisor six years ago, to keep serving in office.

Below you will find the contact information for the Supervisors. Please do so. We have a lot to be focused on for the elections taking place in just a couple of months — without having to battle this kind of cynical ballot measure at the same time.

In closing I will say that there certainly can be a reasonable conversation among reasonable people about whether the term limits that we have now for County Supervisors make sense.  Should it be two terms and done? Three terms and done? Should they apply to other county officials besides supervisor? Should people be able to run again once they are out? Should there be a lifetime ban?  There could even be discussions about how many Supervisors there should be? Or even whether we should have a strong elected-executive system. But reasonable people meet, discuss, confer, and debate, and then work towards consensus.  What Bartlett is trying to do is the opposite of all of that.

For those that have read the column below back on July 10, you know that Orange County Supervisor Lisa Bartlett introduced a self-serving and shady ballot measure designed to mislead voters and get them to grant Bartlett additional time in office beyond the two four-year terms allowed. Happily Bartlett never found a third vote to place the item on the ballot, and a week and half ago removed it from the Supervisor’s meeting agenda.

Well, she’s brought it back. Again, dropping it on a Friday, with hardly any notice to the public before it would be voted upon this coming Tuesday. It’s the exact same proposal as before. Anyways, today I circled back around and confirmed that Supervisors Steel and Wagner are opposed, and that Supervisor Do plans on abstaining. This does the trick as that means only Supervisors Bartlett and Chaffee will be voting yes. Not enough to place this shit-sandwich before the voters.

That said, I want to urge you (once again) to reach out to the Supervisors (the info is at the bottom of this column) and urge them to oppose this horrific and self-serving proposal.

We have seen this before. No one hates term limits more than an incumbent politician who is faced that dreaded moment – a forced return back to being just a regular person. Every once in a while one of these term-limited folks propose a ballot measure that, if passed, would let them extend their time in office.  This year’s “Career Politician” award goes to Orange County Supervisor Lisa Bartlett, who unveiled today, Friday, a ballot measure to be in front of Supervisors at their meeting this Tuesday, a measure 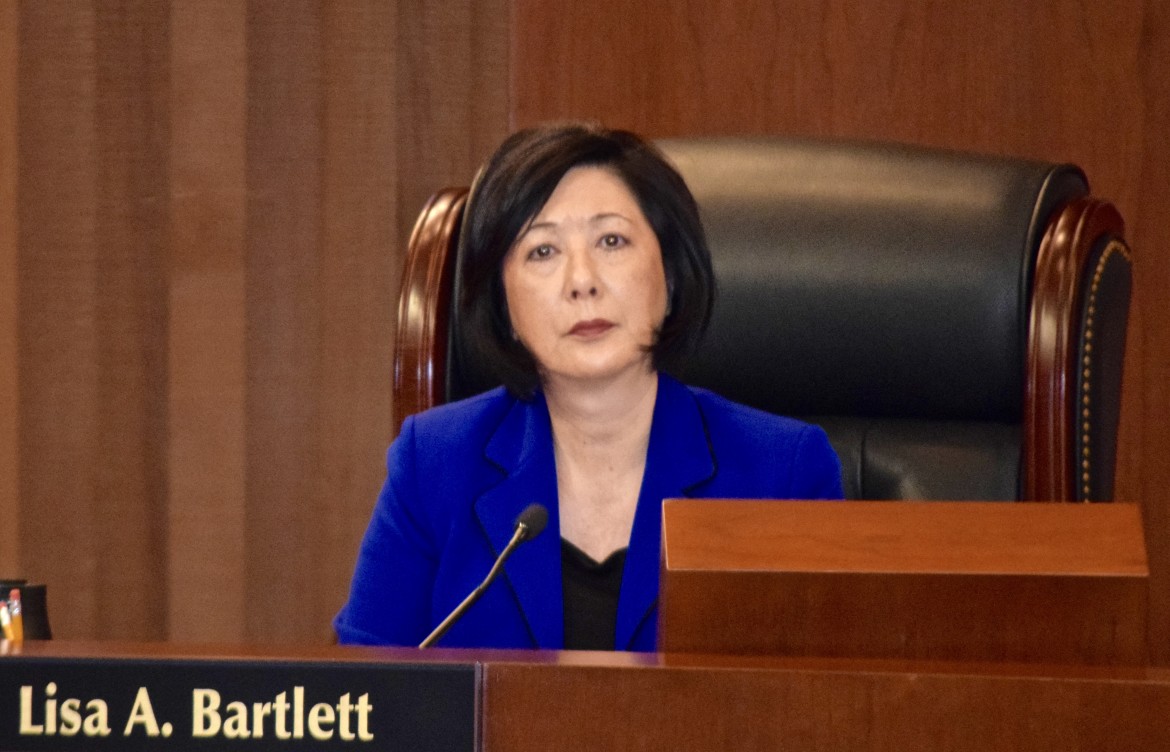 that would gut term limits. And knowing the popularity of term limits in Orange County, she proposes a ballot title that would completely mislead voters into thinking they are strengthening term limits, not realizing they are being played for patsies. Without voters changing the County Charter, poor Bartlett cannot file for re-election in 2022.

This is her proposed ballot title:

That is the big print that voters would see.  What you don’t see unless you get well into the weeds on the small print is that there is already a two-term limit, after which a Supervisor has to leave office.  They CAN run again in the future, but this has happened literally once in the history of the county.  Also, in the fine print is the changing of the term limits from two four-year terms to three four-year terms.

And what is not in the print at all is that there is a very strong legal argument that if this measure passes it would “reset” the terms of all of the incumbents, meaning that Bartlett could run for an additional three terms in office, serving until 2034!  While the county lawyers opine this would not likely be the outcome, independent counsel that is not beholding to the Supervisors of course gave the requested opinion.

I happen to believe that term limits are a good thing.  I think that having career politicians is not a good thing, and that we have a system in America that protects incumbents.

But even if you do not like term limits there is plenty to dislike about what Bartlett is doing here.  Because she is trying to mislead voters.  Note that the ballot title above does not say: “Change term limits from two terms to three terms and eliminate the ability of a termed-out politician to ever run again. And reset the term limits for incumbents.”

This is a cheap maneuver by a politician so desperate to hold on to her office that she is willing to violate a somber responsibility to be truthful and upfront with the voters.

No doubt Supervisor Bartlett has known for a very long time that she was going to try to slip this onto the ballot with virtually no notice, in the middle of July.  She and I spoke about this issue months ago and she never mentioned to me that she was going to do this. But then again why would she tip off anyone to this sort of back-handed maneuver?

GOOD NEWS – THERE ARE NOT THREE VOTES – CALL TO ACTION!

While Bartlett’s play is disappointing, there is some good news here. I have spoken directly with Supervisors Michelle Steel and Don Wagner, and with Supervisor Do’s Chief of Staff, and simply put none of these Supervisors support Bartlett’s proposal.  There is not a single “yes” vote between them!

That said, due diligence is important – as is expressing appreciation. So, I would like to encourage you to either call or send an email to any or all of these three thanking them for committing not to vote for Bartlett’s cynical and self-serving play.  You could also reach out to Supervisor Bartlett and ask her to withdraw this measure.  The other Supervisor, Doug Chafee, has co-authored Bartlett’s proposal. If he is your Supervisor, you should urge him to have it pulled from Tuesday’s agenda as well.

YOU can make a difference. Reach out on their social media pages, or directly through the contacts below: