Californians got to see the two top candidates for governor–Republican Meg Whitman and Democrat Jerry Brown–debate the issues tonight.  Televised statewide, the event gave voters a chance to see both candidates in action and learn more about the differences between the two.

It was one of the better debates this state has seen in recent years.  I believe that is because both candidates are genuinely decent people who respect the voters and the democratic process.  They both clearly have a strong desire to improve the state’s economy and budget situation. But their approaches are vastly different.  For those of us who see the economy, budget reform and improved education as our top issues, Whitman clearly is the stronger candidate. 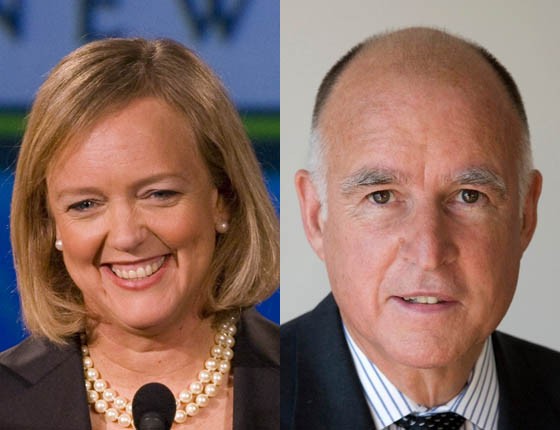 Throughout the debate, Whitman discussed about her plan to rebuild the state’s economy through job creation, reducing red tape and creating an environment where businesses are inspired to invest in the state.  Brown wants to create jobs too, but only green jobs.   It’s the only type of job growth that the Democratic Party seems to find acceptable (with an appropriate amount of government subsidies). However, while green jobs make a nice talking point, that approach that won’t fix the state’s economic woes.  As Whitman quickly pointed out, “green jobs” only account for three percent of the state’s economy.
The reporters did a better job with this debate than their colleagues did with the Fiorina-Boxer debate, which was more like Fiorina versus Boxer and all of the journalists. This time around the questions were mostly even handed, with the exception of Amy Chance’s lopsided campaign ad question. Chance’s question to Whitman was highly critical and repeated charges that her ads are misleading. In contrast, Chance’s question to Brown simply asked if he was happy with his ad calling Whitman a liar. (She might have just said to Brown, “I just called her a liar and you’ve call her a liar—do you think she’s a liar?”).
I thought it was a big stumble when Jerry Brown didn’t know what it costs to send a kid to the University of California today. He should have.
I’m not one who thinks Jerry Brown is horrible person.  He’s a sharp 72-year-old.  But he’d be a horrible governor (again).  He’s beholden to organized labor of all kinds—and organized labor must be dealt with if we’re going to fix our long-term budget problems. He also criti 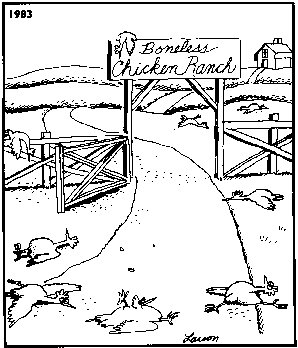 cized Whitman’s proposal to cut the state’s capital gains tax as a gift to the rich of California when it is a critical element of economic recovery and new business investment.
As Whitman said, the next governor will need to have a “spine of steel.”  I believe that Whitman will have a spine of steel, while Brown, particularly against the labor unions, will be spineless (bringing to mind my favorite The Far Side cartoon).
It was also interesting to see how Whitman held up in her first official debate. While at first she appeared to be fairly nervous and uncomfortable, she seemed to quickly find her comfort zone and nimbly address the issues raised. Brown too was quick on his feet, but after 30-plus years of campaigning, the man should be able to debate in his sleep. But this was a big one for Whitman and she did a fine job.
And, finally, tonight Jerry Brown told us that he wants to be governor because he is simply too old to run for president. Lucky us.

2 Responses to “Meg vs. Jerry”