Walters & Golisano — California Republicans: Nowhere To Go But Up

[Publisher’s Note:  We are pleased to present this column on the National Popular Vote issue for your consumption.  I interviewed one of the authors of this column, Tom Golisano, back in March.  You can see that video here – Flash] 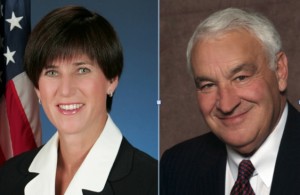 California Republicans: Nowhere To Go But Up
By State Senator Mimi Walters and Tom Golisano

November 2010 turned out to be a monumental success for Republicans throughout the nation and a dismal failure for the California GOP.  While Republicans shocked the nation by winning 63 congressional seats and easily winning back control of the United States Congress; we lost every single statewide Constitutional office in California, something that we’ve only managed to do a couple times since becoming a state.

While, to some Republicans, the title “National Popular Vote” might sound like something conjured-up by pot smoking hippies at Woodstock, the idea is reasonable and, quite frankly, the California Republican Party’s only remaining hope if it intends to resurrect itself during our lifetimes.

The concept is actually quite simple.  Instead of appointing our state’s 55 electors based upon which presidential candidate wins California’s popular vote, we appoint them based upon which candidate wins the nation’s popular vote.  This small adjustment in the way we select our members of the Electoral College will make a dramatic difference in the way presidential campaigns are conducted.  Due to our population, Presidential candidates of both political parties will be forced to pay attention to voters in California.  No longer will California be simply the ATM at which presidential candidates stop on their way to and from campaigning in important battleground states.  For once, we might actually see our state’s important issues addressed.  Our Central Valley would not be forced to deal with a Congress-made “dust bowl” and we might actually see a resolution to our illegal immigration stand-off.

Because presidential candidates will be forced to campaign in our state, campaign funds raised here will actually be used to rebuild California’s Republican Party infrastructure.  With a rebuilt infrastructure, Republicans will once again be competitive.

Others naively claim that National Popular Vote would lead to the influx of hundreds of millions of Democrat dollars into Los Angeles and San Francisco, which they say would spike Democrat turn-out in those urban areas.  Of course, that assumes that the hundreds of millions of union dollars that have been spent on political campaigns in the past couple years and tens of thousands of union workers that have turned-out Democrat voters have had no effect on our elections.  This argument fails to take into consideration the fact that media prices in urban areas such as Los Angeles and San Francisco are the most expensive in the world and generate the smallest return on the investment.  Let’s call it a surtax on liberal votes.  On the other hand, Republican voters tend to live in suburban and rural areas of the state where media prices are dramatically less costly.  In other words, Republicans will be able to turn-out more voters for less money.

In order for Republicans in California to once again be viable, we must rebuild our infrastructure, reinvigorate our grassroots, and reinvest the dollars from California donors back into California.  National Popular Vote is not the complete solution, but at a minimum, it will get our Party moving in the right direction.

7 Responses to “Walters & Golisano — California Republicans: Nowhere To Go But Up”