[Publisher’s Note: When I was approached by a mutual friend on behalf of Dave Kieffer, the new boss over at the state’s largest public employee union, SEIU, about whether I would be willing to feature a column from Kieffer here on the FlashReport, I have to admit I was taken a bit off guard.  It is probably impossible to actually count up the number of times that contributors to this website, including yours truly, have derided the influence of public employee unions — often citing the SEIU specifically in critical commentaries.

It didn’t take me long, however, to determine that if the SEIU wants to take a direct message to the conservative statewide community, it would be both provocative and entertaining to open that forum to them.  Just to double check my gut instinct, I reached out to some advisers who all agreed — run the piece.  So without any further introduction, other than to say that the content of this column should really cause some angst for those who believe, as I do,  that a broadening of the political influence of public employee unions is a bad idea — Flash] 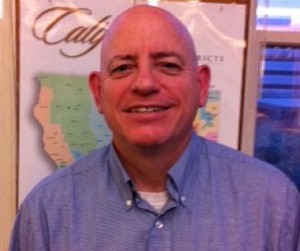 On the face of it, the 700,000 Service Employees International Union’s California members would seemingly have little impact in solid red Republican districts. After all, the purple T-shirt wearing nurses, security officers, child care workers, and janitors don’t fit the Republican demographic, right?

Wrong. Here’s the dirty little secret: More than 40 percent of SEIU’s California members are registered either as Republicans or decline-to-state voters that lean Republican.  All told, we have 87,000 Republicans in our ranks and 93,000 DTS voters.  That amounts to tens of thousands of voters in key swing districts as well as in GOP strongholds.

Yet despite those impressive numbers, SEIU has rarely dabbled in districts where Republicans were likely winners.  Frankly, before the advent of the Top Two primary and the drawing of competitive districts by the Citizens Redistricting Commission, there was little incentive to do so – even though a significant chunk of our members were voting Republican. More conservative forces dominated what were GOP primaries.

But the Top Two election and what is expected to be the creation of more competitive districts, particularly in the Inland Empire and Central Valley, brings new opportunity.  And we’re prepared, along with a not-so-strange coalition of bedfellows, including healthcare providers, public safety unions, teachers and the mainstream business community, to make a significant difference in the 2012 elections. Starting now.

Why would our organization play in the GOP sandbox?  Do the math.  In many districts two Republican incumbents are going to be pitted against each other.  In many cases, it will be a match-up between a Republican who is likely to vote against another $12 billion in cuts, and one that has taken the Grover Norquist pledge.  In the past, the Norquist Republican would have had the advantage in the primary, and then thumped the token Democrat on the ballot in November.

No longer. With the Top Two primary, even in the most Republican of districts, when matched against another Republican supported by a coalition of public safety, business, and our organization in an election where Democrats and DTS voters will make up 40 percent of the electorate or more, the ultra-right candidate will be hard-pressed to have a cakewalk to victory.

Exhibit A: The Stanislaus County Assembly district that is likely to pit freshmen Assemblymembers Bill Berryhill and Kristen Olsen against each other. Berryhill has said he’s against an all cuts budget; Olsen has chosen not to be part of an effort to avoid it.  With the Democrat in the race expected to be a non-factor, those two will face off in a November contest where a solid third of the voters will be Democrats and 20-30 percent will be DTS voters. Add the moderate GOP base that Berryhill will have from the first round of the election, and it’s easy to see a path to victory.

That same calculus can be applied to several other Senate and Assembly districts around the state, including the State Senate seats held by Republicans Tom Berryhill, Bill Emmerson, and Anthony Canella and the Assembly seats of Cameron Smyth and Katcho Achadjian.  All will benefit from the new alliance we’re participating in to elect legislators who do not want to see significant cuts in public safety, education and services to the elderly.

This week, we launched an all-out media effort in those districts, as well as targeting obstructionist legislators including Sen. Tony Strickland and Assemblymember Tim Donnelly.  It includes direct mail (positive and negative), radio, print ads, and social media. (For a sample, click here).

We’ll have a ground game too. Last week, for example, we unleashed hundreds of walkers in upscale Huntington Beach, knocking on the doors of homes valued in the seven figures.  I’ll have to admit that our walkers were skeptical of taking our budget message to high income households. But they found a receptive audience there after residents learned that their crown jewel, Huntington Beach State Park, could  be on the next round of state parks slated to be shuttered because of state budget cutbacks

Lastly, we’ll intensify our registration drives, particularly in counties where Latino voter strength is surging. That includes areas in the Central Valley, Inland Empire, and exurban Los Angeles. Many of these districts still will tilt Republican, but a voting bloc that would not have had much of an effect in a November election in 2010 will put many districts into play in 2012 for moderate candidates.

All these efforts will be designed to allow Republican legislators who want to do the right thing know there will be political backing to do so. No longer should they fear being tarred and feathered in a Republican primary or have their head on a stick.  We’ll have their back if they oppose an all-cuts budget.

And for those who suggest that this an effort by union bosses, it ain’t so.  This is about mobilizing our members who are already Republicans and Republican-leaning DTS voters to support candidates that align with their political philosophy, but also care about delivering basic government services that serve families, such as In-home Support Services, a money-saving program backed strongly by then-Governor Ronald Reagan and now opposed by the ultra-right.

It’s a new day in California’s electoral politics. And our Republican and Republican-leaning members, aligned by the Chamber of Commerce and public safety, intend to make a difference so that those legislators who stand up for California won’t have to fear political ramifications from those would like to see government services crater.