There Is A Historic Opportunity To Abolish Redevelopment Agencies – Seize The Moment!

We’re all familiar with the expression, “snatching victory out of jaws of defeat” — well, on March 16th of this year, I was in shock as I watched Republicans legislators in the State Assembly amazingly do the opposite as they, “snatched defeat out of the jaws of victory.”

On March 16, the Democrats brought up their preferred state budget, including a bill to place billions in tax increases onto what would have been a June ballot, Republicans unified to oppose both the budget and the attendant attempt to hike taxes.  That’s the good news — and GOP legislators continue to deserve praise for staying unified against punitive levies on California taxpayers in the midst of a recession.

That said, amidst the many bills brought up for a vote that night was Senate Bill 77 — legislation that would, if passed, effectively end local Redevelopment Agencies (RDAs).  This legislation was not “tied” to any other bills, and thus if Republicans voted for it (which they should have overwhelmingly), we would have grabbed a significant public policy victory for the evening — picking the flower out of the bouquet of stinky weeds that was otherwise offered up by the Democrats.

I will not devote a significant amount of time in this column to the reasons why RDAs are bad news — I could make a whole list starting with the pervasive usurping of the free market, the outrageous cycle of local government leaders picking “winners” of public funds and favor (and those winners paying back the  politicians through contributions to their campaigns or favorite causes), and of course there is the outrageous and brazen abuse of private property rights by many RDAs through the use of eminent domain.   Orange County Assemblyman Chris Norby, the lone GOP vote for SB 77, penned a succinct column earlier this year for the FlashReport that was a good summary on why RDAs should be abolished – Norby’s “aye” vote left the bill a mere one vote shy of passage.

Given that liberals love all of the things about RDAs that conservative hate, you have to ask yourself — why would all of the Democrats in the Assembly vote to effectively terminate RDAs going forward?  The answer is simple — this legislation, while continuing to guarantee payments for all of the projects currently authorized by local RDA’s, would then quickly phase out the state’s 425 RDA’s and would scoop up the billion plus dollars sitting in RDA treasuries around the state and basically use that money for education funding, which is taking a big hit with the state’s revenue shortfall due to the recession. 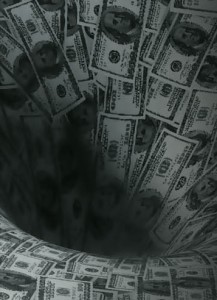 Get involved with a new statewide effort to push GOP legislators to end RDAs -- go to www.stopthemoneypit.com.

In other words, it is only the tough economic times that the scarcity of resources in state government that are making it possible for conservatives to achieve a victory that is often talked about — abolishing these RDAs.  Now I am not saying that all Republicans want to get rid of them.  Some GOPers come out of local government and actually enjoyed the benefits of how playing “Sim City” on an RDA board that helped pad their campaign accounts.  Others see that there is a need for some reform on the “edges” — such as curbing the eminent domain abuses (never mind the myriad of other problems).  But most Republican legislators understand that RDAs represent not only bad public policy, but also permeate the political process in a bad, unhealthy way (by the way, the bulk of the money injected into politics by the beneficiaries of special favors from RDAs go to Democrats, not Republicans, if it even matters).

For my friends who argue that RDAs can and are used “properly” and for good ends in some instances, I would tell you that those examples are truly the exception rather than the rule.  The key is to put an end to all RDAs, and if they are to come back in some form later (requiring a two-thirds vote), Republicans will be at the table to discuss how and what that might look like.

Having spoken to many GOP legislators about their vote that night, I can understand that when the enemy is lobbing massive artillery shells on your location, it is important to stay under cover, and critical to stay unified.  That said, the time is now to realize that the victory to be achieved by ending RDAs.  This a critical point.  The victory here is the actual ending of these entities which are set up so as to be very corrosive in so many ways.  Some have said that if Governor Brown wants this bill to pass, we shouldn’t “give him” the votes without something in exchange.  This is nonsensical — if Brown actually asked for an income tax cut, would Republicans resist until they could “get something” in return?  Of course not.

So the time is now for conservatives to stand up and act — and to end RDA’s.

Today a new coalition of conservative and property rights leaders, of which I am proud to be a part, is announcing a major effort to urge, cajole, push, and prod legislators (Republicans at this point, I guess, sans Chris Norby who is already on board) to put up the votes, and then some, to grab victory out of the jaws of defeat, and end the scourge of RDA’s once and for all.

Officially calling on GOP legislators to abandon their defense of redevelopment agencies, today marks the launch of a statewide public education campaign to make it clear that abolishing the state’s 425 RDAs advances the conservative values of property rights and fiscal responsibility.

Central to this effort will asking GOP legislator to sign a pledge to commit to voting to abolish RDAs.

“Redevelopment agencies are using eminent domain to forcibly seize property from unwilling sellers, they have not fulfilled their promise of creating new jobs and generating new tax revenue for the State. ” said Marko Mlikotin, president of the California Alliance to Protect Private Property Rights. “Redevelopment has failed taxpayers and threatens private property rights.  It is time for the Legislature to do away with these government boondoggles.”

“California’s redevelopment agencies are the biggest perpetrators of eminent domain abuse in the Nation,” said Christina Walsh, from the Institute for Justice, the organization that represented Suzette Kelo before the U.S. Supreme Court in Kelo v. New London. “Until State Legislators abolish these agencies, no private property owner in California is safe.”

“Redevelopment agencies have been the biggest abusers of homeowners’ property rights in California,” stated Jon Coupal, President of the Howard Jarvis Taxpayers Association.  “Immediate action is needed now and we urge all legislators, including Republicans, to reject the influence of politically connected developers and do what is right for ordinary California homeowners.”

I urge you to visit www.stopthemoneypit.como today, and get engaged in this important effort to end RDA’s in California once and for all.

In the era of term limits, sometimes an opportunity comes along and you have to take it.  If you miss it, you never get a second chance. Maybe if you were going to be in office for 20 years you could pass on something worth doing, in the hopes you’d get another bite at the apple. But that is not the case with the legislature.  My message to Republicans is this… seize the day. This is a vote you will be proud of for the rest of your lives. You will “move the needle” on a very important public policy issue.  This is a once in a lifetime opportunity, because the liberal Democratic wing is  voting for something they would never support, but for this budget situation and the insistence of their Governor.

One Response to “There Is A Historic Opportunity To Abolish Redevelopment Agencies – Seize The Moment!”