I have been in Congress nearly 6 years now. During that time, I have heard a number of speeches from the podium on the House floor. I have heard 2 U.S. presidents and any number of prime ministers and presidents and chancellors of other nations. But, last week’s speech by Israeli Prime Minister Benjamin Netanyahu was the best speech I have yet heard in those chambers.

First, from a clinical perspective, he is a great speaker. He used notes, but no teleprompter. Those little glass stands that you always see when Obama speaks were not there. Not using a teleprompter allowed him to ad-lib, as he did when a protestor started yelling in the gallery, without worrying that he would get out of synch with whoever was operating the prompter and thereby either miss or repeat a paragraph. Without that machine in between him and the audience, he made a connection that others fail to make. I could feel his courage. I could feel his strength. And, most importantly, I was overwhelmed by the sincerity of his remarks. I felt he was being completely honest and authentic. Many American politicians could learn something from him.

And, from the standpoint of the message, that too was delivered resolutely and with clarity. The friendship between the U.S. and Israel benefits both countries. I suppose I could count how many times he used the word “peace” in the address, but suffice it to say that he used it a lot. Israel has no aspirations for anything other than to continue to exist as a Jewish state in peace with its neighbors. I loved it when he said that the U.S. doesn’t need to employ in nation building with Israel, because they have already built. That we don’t need to democratize them because they are already a Democracy. And, that we don’t need to defend them because they can defend themselves. They want to recognize a Palestinian state, but only one that agrees to recognize Israel’s right to exist. That is not an unreasonable request. It is also not unreasonable to request that the government of said state not include the terrorist organization, Hamas, which has not called for just the elimination of Israel, but for the elimination of all Jews. The Jewish people have seen this movie before. And, they have a right to do everything they can to ensure that they don’t have to watch it again. I think that President Obama is wrong about most things. But, there is bipartisan agreement in Washington that he is wrong about trying to force Israel to return to the 1967 borders that led to their being attacked then, and will lead to attacks in the future. And, as a Christian, I believe that having Jerusalem entirely within this free country ensures access to this most holy of cities to people of all faiths around the world.

I was encouraged and inspired by the leader of the one enduring democracy and economically free and prosperous country in the Middle East. I hope there will soon be democratic, free and prosperous Arab countries in the Middle East without aspirations to destroy their neighbors. And, I wish there were more world leaders like Netanyahu. Shalom, my friend. May you succeed in attaining it. 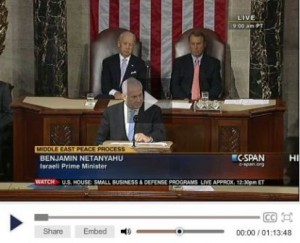