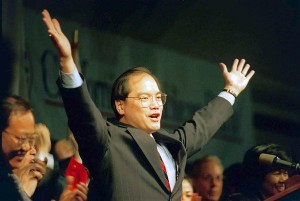 Fong, who had been battling cancer for several years, was a speaker at the commencement ceremonies at Southwestern Law School on Sunday, May 15 where he received an honorary degree and ovation from the graduates and friends and colleagues from his service in elective office.

Matt was a fiscal conservative who has brought strong academic and business skills to state government.  Fong believed small business was the backbone of the California economy and should have an opportunity to compete with the bigger firms. In the State Treasurer’s office, Fong launched an initiative designed to encourage smaller firms to compete for the lucrative underwriting and advisory work on state financing deals.  He created a pool of eligible and authorized financial firms.  He constantly looked for ways to save taxpayer money. He initiated a shelf registration program that sped up the timeline and process for bringing bonds to market and implemented a commercial paper program.

He also enjoyed working with children and started the Save-at-School program which was designed to teach money management skills to elementary students.  Perhaps Fong’s greatest accomplishment was helping to prevent the Orange County bankruptcy from having an impact in other counties and financial markets.  The county declared bankruptcy after the election and only week before Fong was sworn in as state treasurer.

While serving on the Board of Equalization, Matt brought fairness, compassion and common sense to tax administration in California.  He moved swiftly to reduce the agency’s operating costs by nearly $7 million, consolidated offices, and cut waiting times from 45 minutes to less than 5 minutes.  Matt spearheaded a successful multi-billion dollar settlement between utility companies and California’s 58 counties that saved hard-earned taxpayer money and prevented several counties from bankruptcy.

Matt was a graduate of the United States Air Force Academy and attained the rank of Lt. Colonel in the Air Force Reserves.  Following graduation in 1975, he served a five-year active duty military commitment.  As acting comptroller and data processing manager for 8,000 men and women, Matt was awarded the USAF Meritorious Service Medal for exceptional management performance.

Following his military career, Matt completed an MBA at Pepperdine University.  A few years later, he earned a law degree from Southwestern Law School.  In 1992 he was recognized for his community leadership and given the Distinguished Alumnus Award at Pepperdine.

In addition to his strong academic record, Matt blended practical experience in business and finance.  After starting his own small business, he joined the law firm of Sheppard, Mullin, Richter and Hampton.  As a business attorney for the international firm, Matt specialized in transactional law, cross-border acquisitions and high technology licensing.

Following in the political footsteps of his mother, former Secretary of State March Fong Eu, Matt entered politics and was the 1990 Republican nominee for State Controller.  In 1994, he was elected State Treasurer receiving over 3.6 million votes.

Matt advised former House Speaker Newt Gingrich on issues facing Congress as a member of the National Strategies Group. Matt was also involved in reforming the nation’s tax system, having been appointed by former Senator Bob Dole and Speaker Newt Gingrich to the National Tax Reform Commission chaired by Jack Kemp.  Matt was also a leader in the national effort to persuade Swiss banks to provide restitution to Holocaust victims whose assets are being held by the banks, a role that earned Fong an award from the Simon Wiesenthal Center.

Matthew K. Fong was 57 years old and is survived by his wife, Paula and son Matthew and daughter Jade.

[Submitted to the FlashReport by Stan Devereux and Ron Rogers]