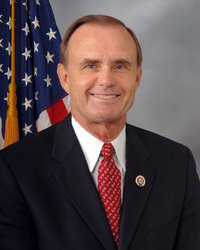 Dream Act A Nightmare For Taxpayers
By Congressman Brian Bilbray

Those of us who serve the American people should support policies that serve the American people first. It is in that spirit that Maryland delegate Neil Parrott is leading the effort to block his state’s recently passed Dream Act that would give illegal aliens the right of in-state tuition and become eligible for tax payer supported financial aid. Unfortunately, Maryland isn’t the only state to consider similar legislation after Congress rejected the measure last December. Yesterday California’s Assembly approved AB 131 which puts California students in direct competition with illegal immigrants for already limited financial aid opportunities, further encourages illegal immigration, and rewards illegal behavior with tax dollars. This legislation would be a slap in the face to students whose seat in the classroom could be usurped by an illegal immigrant, not to mention the millions of would-be immigrants waiting around the world to legally come to our soil.

The so-called Dream Act, whether it is adopted in California, Maryland or as federal law, is a nightmare for lawful U.S. citizens seeking higher education. It significantly limits the two most important opportunities students possess: classroom space and financial aid opportunities. Each seat we award an illegal immigrant is a seat denied to a legal student. Lawmakers should be rigorously protecting the finite number of seats in our classrooms, in community colleges and universities, for lawful U.S. residents who have worked diligently to earn admission to an institution of higher learning. Adding insult to injury, the Dream Act drains resources for financial aid opportunities. We cannot justify using tax-dollars to reward illegal immigrants and the Dream Act puts U.S. citizens in direct competition with illegal immigrants for already limited financial aid opportunities. Spaces in the classroom and tuition aid are two priorities we must reserve for legal students.

We should also be protecting the American worker as vigorously as the American student. Last week, the Supreme Court made a monumental ruling when it comes to meaningful immigration reform and job creation. In a 5-3 decision upholding an Arizona immigration law, the nation’s highest court upheld the state’s right to require employers to use E-Verify and revoke the business licenses of companies that knowingly hire illegal workers. The E-Verify system is an on-line program that enables employers to verify the legal status of new hires in the U.S. Over 200,000 businesses currently use the system and 1,300 new businesses sign up each week. This is an important decision not just for Arizona, but for other state legislatures that have proposed using E-Verify in their state.

The E-Verify system strikes at the source of our immigration problem: employers who hire illegal labor. There is no other legislation that can be quickly enacted to create more jobs for American workers than requiring the use of E-Verify. In my hometown of San Diego, nearly one in ten people are out of work and nationwide fourteen million Americans are looking for jobs. According to the Pew Hispanic Center, seven million people are working in this country illegally.  These U.S. jobs should go to legal workers.

Perhaps the best attribute of E-Verify is that it has received overwhelming bipartisan support since its creation in 1996.  According to a Rasmussen poll published on May 31, eighty-two percent of American voters think businesses should be required to use E-Verify and sixty-one percent of voters favor a law in their state that would penalize companies that knowingly and repeatedly hire illegal immigrants. Last week, Congressman Heath Shuler (D-NC) and I reintroduced the SAVE Act that makes E-Verify mandatory for all employers.  This bill also makes provisions for an additional 5,000 Customs and Border Patrol agents, 1,150 Immigrations and Customs Enforcement and 20 additional immigration judges.  I also look forward to legislation my good friend and colleague Lamar Smith, Chairman of the House Judiciary Committee, is planning to introduce regarding E-Verify.

As the son of an Australian immigrant, I am proud to say we are a nation of immigrants, but we are also a nation of laws. Passing the Dream Act is tantamount to rewarding individuals for subverting our laws.  Lawmakers should instead be working to protect our precious resources by encouraging legislation that upholds our laws and protects the opportunities of legal residents, such as implementing E-Verify at the federal level.