Speaker John Perez is on a jihad to obliterate the City of Vernon, home of the world famous Dodger Dog, quite literally.  His legislation to literally abolish the city has garnered much attention, and has already passed out of the Assembly.  While some serious legal questions have been raised about whether Vernon can be obliterated in such a manner, the underlying question is should Vernon be a city at all?  In my mind, there are really three issues at hand here. 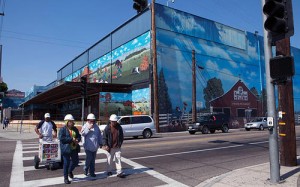 The first is whether it is appropriate to have a city whose only real function is to serve as an incubator for its local business community.  At less than a hundred residents in an area of roughly five square miles, that is home to businesses that collectively have more than 50,000 employees, you can kind of get the picture.  Vernon was not started as a residential community.  Actually, it’s quite the opposite.  Vernon has been a magnet over the decades for every kind of gross, smelly and loud business that you could think of – incinerators, slaughterhouses, and the like.  Frankly, I’m surprised it has even the few residents that it does.  Vernon has no parks, no libraries, and no infrastructure needs of that sort. In my opinion, while it is unusual to have an all-industrial city, it’s not something that is inappropriate.

The second issue is a more troublesome one – which has to do with accountability.  Vernon is not structured as some sort of massive, private business owners association – it’s an actual government entity.  Vernon is located in the United States of America, where all governments at every level are structured to be democratic republics, with the people electing representatives who then “run” that government.  You’ve probably already heard some of the horror stories about how democracy has been largely circumvented in this company town (or town of companies, as it were).  What few residents there are all live in city-owned housing, and thus you’ve had a case were the elected officials have quote literally been able to pick their constituents.  There are more issues, but that, in my mind, is the most egregious of them.

To make matters worse, the handful of people that have had a role in the running of Vernon’s government over the years have been, at best, remarkably imprudent, and at worst complicit in running an insular institution that has been paying itself (the City Council) as well as the senior employees vast sums of money (the former longtime City Manager was getting paid well over a half-million dollars a year and today is the highest compensated pensioner in the state retirement system.  Part-time City Councilmember have been paying themselves nearly $70,000 a year!

The final issue, the “sticky widget” in this discussion (besides the legal issues I mentioned above), is that relative to the business climate fostered within Vernon, the city has been run as sort of benevolent dictatorship.  Which is to say that while the elite group of people in charge of city government were feathering their nest, they were simultaneously working, quite successfully from all accounts, to make Vernon an amazing place to locate a business.  The City’s website proudly boasts some amazing statistics – 1,800 companies, 55 thousand workers, and an annual private employee payroll of $4.5 billion.  Business taxes are low, power rates are significantly lower then what is available even just outside the city boundaries (Vernon built and owns its own power plant).

With Perez’s bill threatening the very existence of Vernon, it is the city’s sizable business community that is now mobilizing to try and stop disincorporation from occurring.  These business owners are concerned, and rightfully so, that if they become a part of Los Angeles County, with its higher fees and taxes, that they will lose their profitability and end up going out of business.  The question is whether or not these large employers can stop Perez, who is channeling a Brahma bull with his intensity to “undo” the city.

I suspect largely due to pressure from Vernon’s business community, the City hired former Attorney General John Van de Kamp to come up with a series of reforms to the city government’s structure (such as the creation of a housing commission, substantially lowering the pay and benefits of staff and council alike, and more.  It seems to be a work in progress, though the biggest challenge, I think, is how to deal with the inherent problems of having a city population that is about the size of the State Assembly.

John Perez would tell you that his motive is an altruistic one – to ferret out corruption.  Speculation is rampant about his unstated motive, as he resolutely refuses to work towards a solution that addresses the city’s governance issues but strives to protect the significant, important business community of Vernon.  If you ask me, the motive is pretty clear – a city that is not using the coercive powers of government to take property (funds) from businesses to then redistribute to other people and projects is anathema to liberals like Perez.  Just knowing that there is a haven for businesses to operate at a substantially lower level of taxation, in the midst of his district no less, is likely enough to motivate Perez.

The purpose of this column is not to defend the City of Vernon – I don’t know how anyone could do that – really.  But as I look at this issue, it does not lend itself to an easy answer.  The folly of the government of Vernon must be addressed completely, if that is possible.  And yet the one tragedy that you want to avoid is to have the County of Los Angeles (and possibly the city, after an annexation) sweeping in and consuming what is special about Vernon’s pro-business community, leaving behind only the legend that once upon a time there was a haven in the midst of Los Angeles where business could thrive.

One Response to “How do you solve a problem like Vernon?”