I’ve done a fair amount of work in New Hampshire for conservative organizations, so I watched the debate last night at Saint Anselm College with considerable interest. Here’s my take on winners and losers.

The biggest loser was Barack Obama. The entire field presented itself as credible, articulate and capable. The range of cogent attacks on the Obama Administration serve as a great early-indicator of what next year’s General Election is going to look like. He’s vulnerable on the economy, jobs, federal spending, entitlements, energy independence, bailouts, immigration and so much more.

The second biggest loser was Sarah Palin. If Palin is actually looking at getting into the race (who knows?) her apparent strategy is to arrive late into a weak field and suck up all the energy in the race. However, the field last night showed that it is not weak, it is quite strong. We have businessmen, former Governors, former Senators and members of Congress past and present speaking forcefully, intelligently and candidly about why Barack Obama has failed the country. 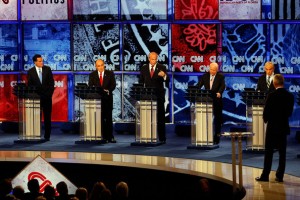 Mitt Romney had a very good night. Romney entered the debate as the favorite, and nothing occurred last night to change that. He was articulate, knowledgeable and affable. The rap on Romney from 2008 was that he was too stiff and stand-offish – more comfortable on Wall Street than Main Street. Last night he came across as friendly and approachable, the kind of guy you’d like to have a beer with to talk politics – or hockey. That quality – affability – is why the left had such a hard time making their attacks on Ronald Reagan stick. Team Romney is beaming about his performance.

Michelle Bachman had a good night. The only woman in the race, she got lots of media buzz by essentially announcing her candidacy during the debate (she tried to make the distinction that her ‘formal’ announcement will still come later) and had some good sound bites aimed at President Obama. She, as much as anyone, is likely to occupy the space that Sarah Palin would vie for should she get in the race. Bachman will do well in coming days.

Newt Gingrich also had a good night. He demonstrated once again that he is usually the smartest guy in the room, and was able to speak directly and concisely about why he wants to be president. He definitely helped himself, and he’ll pick up support (and campaign staff) because of it.

Tim Pawlenty is being portrayed by pundits as the big loser last night for not directly confronting Romney with his “Obamneycare” characterization of Massachusetts healthcare reform. However, the pundits are dead wrong. To the contrary, he may have been the most impressive candidate on the stage. He was smart, extremely articulate and responsive. It was my first chance to see him in action, and he did a great job. There will be time enough for him to go after Romney, which he most certainly is going to do, and he didn’t need to do it last night in a confrontational way.

Pawlenty also served notice to another “non-candidate” – Texas Governor Rick Perry – that he will not easily be discharged from the spot of “establishment alternative to Mitt Romney.”

Rick Santorum did fine, but it’s hard to figure what path is open to him to win in New Hampshire. He needs to do things to break out of the pack, but he was an after-thought all evening and really didn’t advance the ball.  I predict his campaign will struggle.

Herman Cain did quite seem to be in the same league as Romney, Bachman or Pawlenty. He’s bright and articulate, and his is a compelling story – but he does not have the background or the bonafides of the others. I see him as a possible Commerce Secretarty, nor a president.

And I think that Ron Paul did not do well. He looked gaunt in his ill-fitting suit, and his message was disjointed and convoluted. His libertarian position on marriage – let the churches do that – will hurt him among social conservatives, the biggest block of voters in both New Hampshire and Iowa. And his attempts to talk about monetary policy never got off the ground.  In 2008 he was a popular Ross Perot-style plain-speaker, ringing the conservative bell. This year he just seems irrelevant.

We’re a long way from the time when voters will be seriously making choices among the candidates, but from what I saw of the field last night – there are some good choices to be had.