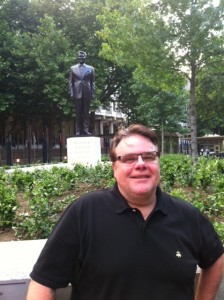 Today on July 4th, a great statue of Ronald Reagan was unveiled in London outside the U.S. Embassy on Grosvenor Square. Reagan joins other Presidents, Dwight David Eisenhower and Franklin Roosevelt, in memorials on the square. I was glad to have an opportunity to be at the unveiling, and see the start of this fitting memorial on Independence Day, to honor a President who saw the value of keeping U.S. troops in Europe and building up defense forces to the ultimate defeat of Communism in the Cold War. Funding was provided by the Reagan Foundation in Simi Valley.