The Family Action PAC is one of California’s most prominent conservative donor organizations. Founded years ago in Orange County as a ideologically conservative counter-point to the New Majority, the FAP has long worked hard to elect conservatives to office at the state and local levels.

It was clear to me and many other conservatives that any solid legislation that would impair, hamper, or abolish RDAs — is a welcome idea. As I have said, Redevelopment Agencies may have started with a good idea in mind, but they have become a good old boys network of redistributing money through taxes into local development projects, typically being awarded to friends and political contributors of local city council members (who conveniently are the members of the city redevelopment agency).

Anyways, despite serious pressure from city-paid lobbyists, and despite the howls of local council members around the state, six GOP legislators stepped up to the plate and voted for the piece of legislation that would end RDAs — these six legislators, who deserve high praise, were State Senator Ted Gaines, and Assemblymembers Beth Gaines, Dan Logue, Allan Mansoor, Jim Nielsen, and Chris Norby.

The legislation ended up passing and has been signed by Governor Brown. The redevelopment lobby is, of course, suing in court to try and stop the implementation of these new laws. So we’ll see how that plays out.

But in the meantime, at a luncheon that just took place at the Pacific Club in Newport Beach, the better part of a hundred Family Action PAC members gathered to present awards of gratitude to the six GOP legislators who cast the courageous “aye” votes — two of those legislators were on hand to receive their awards in person — Chris Norby and Allan Mansoor.

Assemblyman Chris Norby spoke to the group at length on redevelopment, as did the Pacific Research Institute’s Steve Greenhut.

Congratulations to the six patriots — who are well-deserving of the praise and awards.

(In the photo below are FAP President Larry Smith, FAP Board Member Doug Swardstrom, and Assemblymembers Allan Mansoor and Chris Norby.) 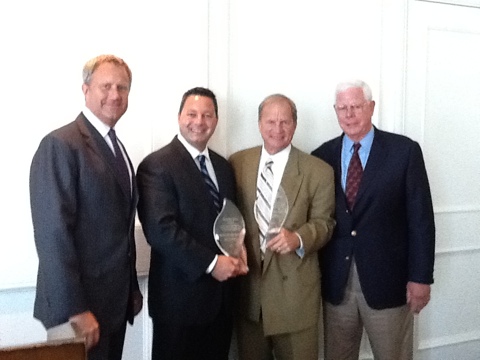